Kyle Allen, who plays Michelle Monaghan and Aaron Paul’s 15-year-old son on The Path, was a secondary presence through the first half of the 10-episode season and moves to the fore in Episode 6, “Breaking and Entering.” We sat down with Allen to talk about the episode, the experience he’s had working on his first series, and — of course — that hair!

Hawk calls out the fact that he doesn’t think there’s anything wrong with having a relationship with someone outside the movement. How were you thinking about that when you were shooting the scenes in this episode?

It’s mounting confusion at this point. He’s met this girl and it was this innocent thing at first, and then it starts dawning on him in this episode that he can’t just keep doing this forever.

You tell her at the end of this episode that you’re having some doubts. The Meyerists don’t worship Steven Meyer, right?

He’s not divine in any biblical sense, but he might as well be. People who are at the highest rungs are revered as gods to the novices.

So what is Hawk doubting?

He’s beginning to question, and he had never questioned before. He grew up in and had been spoonfed everything.

You’re 21 years old and playing a little above your age on the show. Did you have any issues getting into the headspace of a 15-year-old?

Before we started shooting, I tried to get into the habit of acting like a 15-year-old. He hasn’t built any walls yet. Nothing has happened to him. He’s been in this bubble, so I tried to emulate the vulnerability and honesty that you have at that age.

“Just learning a discipline — just being able to express something — works that part of your brain. You transfer that feeling you had from dancing to acting, whether it’s frustration or love or rage or whatever it is.”

Hawk said he thought Arcade Fire was a video game.

[Laughs.] That was really hard to say. I hope I did it believably.

Are you an Arcade Fire fan?

Yeah, I’m a fan of Arcade Fire and video games.

This is your first series. What’s your background?

I did acrobatics and gymnastics until I was 12, and then I did classical ballet for another six years after that before I started acting. I went to the Kirov Academy of ballet in Washington, D.C.

Are you still doing that?

I do it a little. It’s difficult to now because I was in such an intensive environment before. An easy day was three and a half hours.

There are a lot of theater roles you wouldn’t even be able to audition for without that kind of training. Do you think you’ll pursue that?

Definitely. Theater is where it’s at for me.

Have you been in any shows or auditioned for any shows?

I auditioned for a play in New York when we were shooting The Path there, but nothing came of it.

And your acting training was mostly improv?

Improv and scene study. The ballet training has helped immensely. Just learning a discipline — just being able to express something — works that part of your brain. You transfer that feeling you had from dancing to acting, whether it’s frustration or love or rage or whatever it is.

You had the hair, obviously, when you started The Path. Did you have any discussions with the producers about cutting it?

[Laughs.] When I did the hair and makeup test, I was waiting with Rockmond Dunbar. He went before me and came out pretty quickly. [Dunbar is bald.] I thought mine would take forever. I went in and sat in the chair, and Anita Crawford — who runs the hair and makeup — just looked at me and said, “He’s good.”

At some point, you’re going to read a script and see “crewcut” and have to decide whether to try and talk them out of it or get a haircut.

If the role is good, I would definitely get my hair cut. I might get my hair cut for The Path if we get another season and the producers wanted me to.

Was there much joking when you got hired about Jason Katims casting you for your Tim Riggins hair?

[Laughs.] They liked the hair. I think I may have gotten the part because of the mane!

You shot these last two episodes together. Did you know you had to get to a particular place from the beginning of Episode 5 to the end of Episode 6?

I read Episode 5 and had it for a long time, but I didn’t get Episode 6 until right before we started shooting. In 5 he’s exploring this thing with Ashley, and in 6—

You’re making out the entire episode.

Pretty much. [Laughs.] A lot of things are happening, and it’s a really reactive episode for Hawk. I had to maintain the cluelessness to what was happening around me.

The show doesn’t beat viewers over the head with Meyerist mythology. You pick it up as you go. Did you experience it that way as you were shooting, or did you have something like a Meyerism boot camp before you started shooting?

The writers have a bible that they wrote out and sent to the cast that has all of the rules, but you get more explanation as you go from the scripts.

One of the Meyerists do that’s both humanitarian and a little icky is helping people in distressed situations and then recruiting them. How did that play out for Hawk in this episode when his girlfriend’s family is in financial distress?

Ashley is in the middle of getting evicted from her house. They’re getting notices, and her mom is kind of in denial. When the police finally come in Episode 6 and take them out of the house, that’s an opportunity for Hawk to bring them into the compound.

At what point in the episode do you think that you can’t reconcile having this girlfriend with staying in the Meyerist? There are indications that another family member left the movement under similar circumstances.

And at around the same age. I don’t think that has necessarily hit home with Hawk yet, but it may happen in later episodes. I don’t think he realizes yet that he may have to make a choice.

Are you doing auditions right now, or would The Path go back into production soon if it gets picked up for a second season?

I can’t go out for pilot season because we would theoretically start shooting the next season in June or July.

You came into The Path as a young actor in your first series, and you get thrown into the deep end with people like Aaron Paul and Michelle Monaghan. Was that intimidating or just odd to be in that kind of environment for the first time?

It’s a little strange. It’s ten episodes and Hawk has a lot of material for a secondary character, and so many of my scenes are with fantastic actors. Amy Forsyth, who plays Hawk’s girlfriend, is also a fairly new actor, which was kind of nice. Aaron and Michelle are so grounded and so present, and Mike Cahill [who directed the first two episodes] completely dissipated any nervousness I had from the very first scene. He’s so good and really trusts his actors. 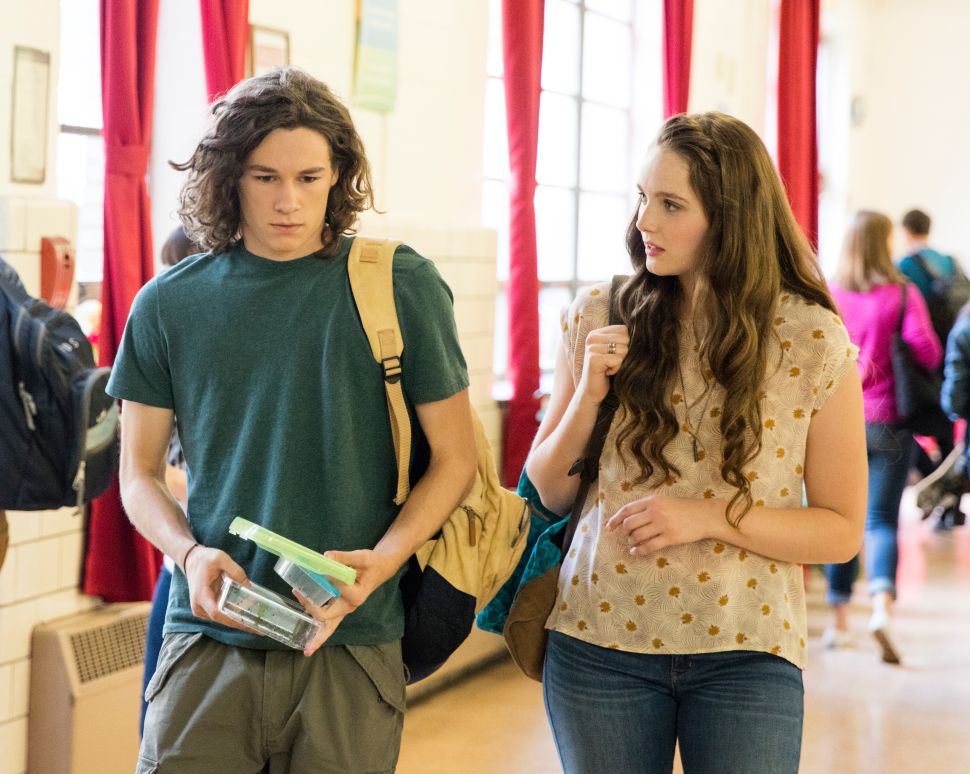