If someone had told me one year ago that I’d be describing Ryan Murphy–the creator of the cloyingly twee Glee and the hit-or-miss American Horror Story franchise–as the savior of modern television, I would have probably laughed in your face. (I wouldn’t have questioned your time-traveler’s knowledge of the future, though; this was in the blissful antediluvian period before James Franco’s 11.22.63). And yet…here we are. This week marked the end of Mr. Murphy’s masterful ten-episode mini-series, The People V. O.J. Simpson: American Crime Story, a welcome respite to the most content-bloated winter in history. And all I can say is: I wish MORE showrunners and networks took a note from the Murphy/Brad Falchuk playbook.

The O.J. show had a lot of things going against it right off the bat, not the least of which was its own title, which was not only a mouthful, but a confusing portmanteau of both ABC’s miniseries anthology American Crime and Murphy’s other FX series, American Horror Story. Then there was also the “dramatized true crime” format, which could at first glance appear too Lifetime-y in today’s hyperreal To Catch a Murderer and Serial landscape. Then there were the issues that were brought about in the first rendition of “the trial of the century”: capturing the simmering racial, sexual and celebrity politics in the case didn’t exactly jive with Mr. Murphy’s style, which tends towards the theatrical. Cinematic, campy and not exactly subtle, Mr. Murphy seemed as out of place heading up The People V. O.J. Simpson as Lena Dunham would be if given the reins to Shondaland. (Though Ms. Dunham, proven in both her Scandal cameo and SNL sketch about working for Olivia Pope, would probably be a great person to tap if Ms. Rhimes decided to go for baroque one season.)

The fact that everyone in America knew the results of the trial–thus superficially deflating much of the tension a courtroom drama would hold over two months of running time–seemed perhaps the least of American Crime Story‘s problems.

And yet, it worked. Goddammit, FX pulled off one hell of a show, and everyone should be applauded for their involvement. Especially Jeffrey Toobin, whose book was the source material and who consulted on the program, along with Larry Karaszewski and Scott Alexander, The People Vs. Larry Flynt writers (and frequent Tim Burton collaborators), for their amazingly taut script. The actors (with Cuba Gooding as the exception) were all incredible: if Sarah Paulson doesn’t win all the awards for her portrayal of Marcia Clark, it will be a bigger “fuck you” to feminism than the possible outcome of this election cycle. Ryan Murphy, who put this whole show together and managed to stay out of its own way, perhaps deserves the greatest accolade of all.

It was great television, but it’s especially a welcome relief this particular season, which has been inundated by plodding programs that demand our devotion to a whole season before proving to the audience why we should even bother. In a marvelous piece in The Atlantic this week, writer David Sims tackles a problem all too known to anyone who writes about TV: specifically, the bloated narcissism of streaming and prestige television today.

That’s what’s most troubling about the new binge economy: There’s even less emphasis on a show’s quality or consistency. The network TV model, which hinges on ratings, can certainly be cruel and unfair—there are dozens of cult classics that were unfairly cut short because they didn’t fare well enough with the right advertising demographics. But the streaming model doesn’t seem much better either. Outright critical bombs like Hemlock Grove and Fuller House are auto-renewed as a matter of course, and genuine hits like House of Cards will pump out new chapters as long as their casts can stay under contract.

James Poniewozik put his finger on this issue, made increasingly vivid in the age of streaming content (though, as Simms argued, probably began with The Wire) in a December 8th article for The New York Times, where he labeled the phenomena of shows demanding to be binge-watched “The Suck.”

In fact, Netflix’s chief content officer, Ted Sarandos, has said he considers the first season of a series, not the first episode, to be the “pilot.” So its premieres tend not to grab you so much as let you sink in. The first episode of “Narcos,” its drug-cartel drama, is an exposition-heavy scene-setter with as much voice-over as an audiobook; it’s less a pilot than a foreword.

“It’s an insidiously clever approach: You need a whole season to decide whether or not you like a show, and by the time you’ve watched all that, you’re in too deep to turn back,” said Simms. And it’s a trap that American Crime Story avoided by going balls-out in its very first episode, beginning not with the slow, agonizing rug burn of, say, a House of Cards, but with an elevator-in-freefall WOOSH of a black celebrity murder suspect being hunted by the L.A.P.D. in the wake of the Rodney King trial. It was that very first episode that had Johnny Cochran (Courtney B. Vance) frothing at the mouth at young assistant D.A. Chris Darden (Sterling K. Brown) “Choose a side!” and a frightened Robert Kardashian (David Schwimmer) talking down his best friend “Juice” from splattering his brains all over goddaughter Kim Kardashian’s bedroom.

As for the show’s finale? It was probably the weakest of the ten hours; as it should be. Like Game of Thrones, American Crime Story put its money shots in the pen ultimate episode with the Mark Fuhrman tapes, and let the finale be more of a postmortem than a necessity to tease out cliffhangers. The show, while never coming out and saying definitively that O.J. Simpson killed Nicole Brown Simpson and Ron Goldman, allowed us to come to our own conclusions with perhaps more sober clarity than we had 20 years ago, when the wound was still fresh.

Will there be another season of American Crime Story? It hasn’t been officially announced yet, but…probably. I’m trying to withhold my inner critic, who wants to say that the network should let this one-off stand by itself as a singular example of what a short, self-contained mini-series can accomplish. If FX and Mr. Murphy think they can capture lightening in a bottle for a second time, who am I to tell them they can’t? After all, if it’s terrible, I can always just stop watching.

…But I probably won’t. 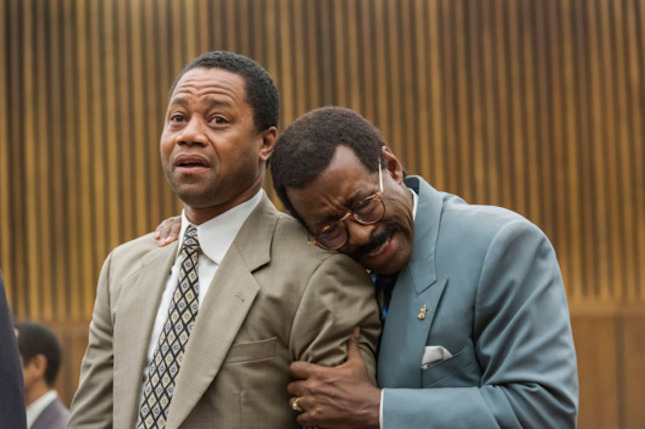