“This is insane! You couldn’t get away with this plot twist in an airport paperback!”

– Dominick Dunne (Robert Morse*), author of O.J. trial-“inspired” airport paperback Another City, Not My Own.

Okay, well, the show went there, as it ultimately had to do, tackling the L.A.P.D.’s most notorious and despicable racist, Mark Fuhrman. Now, let’s take a minute here and think about Mark Fuhrman, who lied on the stand about saying the N-word when he said it approximately a gazillion times, on a tape recorded by wannabe screenwriter/lady cutie Laura McKinny, whilst also bragging about murdering minorities AND shit-talking his female superior Captain Peggy York, who, oh yeah, happens to be married to Judge Lance Ito. (Callback to episode 3, where she appears briefly to hover her hand over Fuhrman’s name before signing off on the conflict of interest spousal agreement or whatever.)

Mark Fuhrman, who a lot of people believe may have single-handedly lost the prosecution their conviction in the O.J. case by allowing the possibility that a racist cop who “allegedly” found the evidence linking O.J. to the murders had already perjured himself on the stand (re: the N-word) and pleaded the fifth when asked if he planted said evidence MIGHT have, you know, credibility problems. Not to mention the extra super-ammo to the defense’s case, which was always less about their client being innocent than it was about the whole L.A.P.D. being guilty. Mark Furhman, you would think, should be the most toxic man in the world after the O.J. Simpson trial. And yet…the defense actually may have been onto something–not about the whole Columbian neck-tie thing, but just the terrible, inexcusable racist world we live–because Mark Fuhrman never really went away.

Oh sure, Mark Fuhrman DEFINITELY didn’t have fun in those post-O.J. years. He was tried for perjury after the case, albeit begrudgingly by Gil Garcetti’s office, which eventually let him get off with a plea bargain where he paid $200 and had three years probation. (Much like the injustices of the financial collapse of 2008 where only the most tertiary characters in the saga ended up getting any jail time, it is notable that Fuhrman is the only person to be convicted of criminal charges in the O.J. case.) Mark Fuhrman also “retired” from the L.A.P.D., which I’m sure wasn’t ideal for him, but he wasn’t fired. His criminal conviction was expunged 18 months later.

Then, two years after the O.J. case, Mark Fuhrman comes out with a book about his side of the story, A Murder in Brentwood. The intro is written by famed prosecutor Vincent Bugliosi, known for putting Charles Manson behind bars (and then writing a super popular book about it). The book spent three months on the New York Times bestseller list. And Bugliosi isn’t Fuhrman’s only fan. Like, Dominick Dunne STILL held a cocktail party in honor of Fuhrman after the trial, which he writes about in his Vanity Fair piece “Trail of Guilt,” which is about another murder but also about how unfair the world has been to Mark Fuhrman, who “will always be a controversial character, but he also happens to be one of America’s greatest detectives.” (What?)  Dunne also claimed that he “knew for sure that the n-word would never pass Mark Fuhrman’s lips again” (how?) and managed to throw some righteous indignation in his piece for the “minority members of the news department” at Good Morning America who successfully vetoed Fuhrman after he was hired as a commentator for Good Morning America. “There will always be some who can never forgive him,” Dunne sniffed.

When Dunne writes, “I’ve always admired cops, and I hate to see the way they are treated on the stand by defense attorneys at murder trials,” does it make you feel super icky inside? Because it should. It should also make you feel icky inside to learn that Fuhrman wrote a book about the case Dunne called him in for, Murder in Greenwich, and that Christopher Meloni–you know, the face of heroic cops everywhere, goddamn STABLER—starred as Fuhrman in the 2002 miniseries adaptation. How about the fact that Fuhrman has published like, four more books, is currently a commentator on Fox News (well, that part at least should come as a surprise to no one) and is available for any media appearances regarding The People V. O.J. Simpson: American Crime Story, should you want him? Does that make you feel weird inside? Because I feel weird inside.

In the same way that the civil suit against O.J. Simpson made it impossible for the celebrity to cash in on his notoriety from the case, Mark Fuhrman should not be allowed to keep raking publicity, credibility, and yes–cash money–from the fame afforded to him when the world discovered that he was the embodiment of L.A.P.D.’s vile racism. And yet. And yet, the show does a pretty fine job threading the needle this episode, showing that yes, Fuhrman said some terrible, inexcusable things, but no, that doesn’t make him the villain of this story (though it’d be oh so easy to make him so). There was still a murder, and Mark Fuhrman didn’t commit it; nor, in all likelihood, is it possible that he tampered with any evidence in this particular case. Maybe the most adroit condemnation of Fuhrman comes from Judge Ito regarding his wife, and what’s chilling about it is that it’s not really a condemnation at all, merely a statement about the prevalence of Fuhrmans everywhere: “Women who work in male-dominated professions are tougher than most, and if they are successful, they are almost always targets for these kinds of treatments.”

That’s some truth right there. Mark Fuhrman may have been fairly or unfairly punished, either too much or not enough, in both the court of public opinion and the regular court where he plead guilty to perjury. But Mark Fuhrman, and people just like him, still exist, and hold positions of power and influence in these “male-dominated professions.” It’s a subtle point in an episode chock-full of surprisingly nuanced questions, meant to make us uncomfortable precisely because the issues aren’t black and white. (See also: “Is F. Lee Bailey proving that he’s a good lawyer, or  just that he’s one of the Good Ole’ Boys when he and Cochran go to North Carolina? Is it possible that Darden’s best judgment call in the entire case–not to put Fuhrman on the stand–gets overlooked because he was over-ruled by his own over-eager superior…who happens to be a woman in a male-dominated profession…so…so…so…whose fault is this, anyway?)

This wasn’t “fun” hour of television, but it might possibly one of the most necessary in recent history. You walk away from it feeling upset precisely because there are no clear answers. Nothing was decided…well, except Marcia Clark’s custody case. It’s up to the audience to look into ourselves to figure out where we stand on the rest.

*Yes, Bert Cooper from Mad Men! How did it take me THIS LONG to figure it out?? 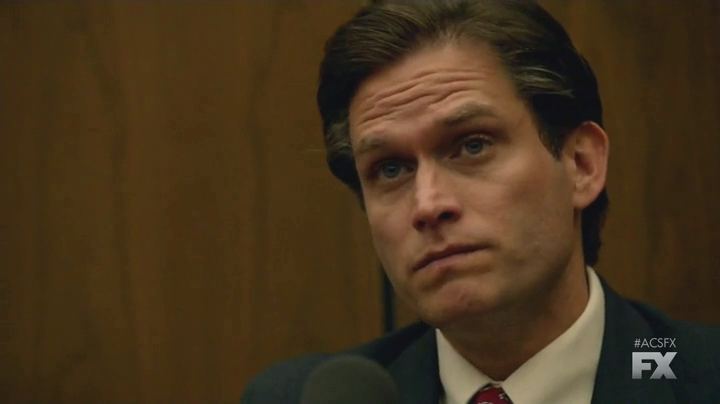