Well, kids, that was a pretty rough ride. Not gonna lie, I’m feeling a little sick to my stomach right now. And not just because one of our heroes just got mutilated to death with a baseball bat. But also because of the sinking sensation that maybe they deserved it.

Last week, Glenn “Steady Voice of Reason” Rhee remarked to Rosita that going after the Saviors was a mistake, because “Maybe they keep knowing more about us than we know about them.” He couldn’t have known how right he was.

All along, Rick & co. have been making a set of assumptions about the Saviors: That the compound they attacked in “Not Tomorrow Yet” was a major Saviors base of operations; that their attack had seriously impacted their numbers and scattered their remaining members; that their own skills and careful planning made them safe against any future attacks by the Saviors.

This is all nonsense, of course. Hints abounded in the last few episodes that there was much more to the Saviors than any of them had yet seen: The elaborate system that Paula used for communicating over her walkie-talkie. The fact that Dwight—who is probably not all that high up on the Saviors’ totem pole, considering he’s a former deserter who got his face burned off for his sins—was the leader of a 10-man platoon. The eerie and systematic consistency of some of the Saviors’ phrases and methods. It all adds up to something much, much bigger.

And last night Rick & co. discovered just how much bigger, to horrifying results. Using the real resources at their disposal, the Saviors put a plan into effect that was tactically brilliant and ended up with most of our protagonists inescapably in their clutches. It also was an extremely effective show of force that, employing the growing sense of dread that The Walking Dead is always so good at, lifted the veil from our heroes’ eyes as they gradually came to understand just how strong the Saviors are, and just how utterly fucked they were as a result.

At first, I didn’t understand how the Saviors could possibly have known that Maggie would get sick and force our heroes to drive to the Hilltop. Then I realized that they must have been biding their time, watching Alexandria and learning more and more about its resources, schedules, and practices, and waiting for a chance to put their plan into action. They knew they had to go to the Hilltop eventually. (And of course, the fact they’d just captured four Alexandrians made this a pretty ideal moment anyway.)

So Maggie gets sick, baby at risk, and everyone piles into the RV to bring her to the Hilltop’s doctor. They build their away team using their tried-and-true system of “whoever the hell decides they need to be in the RV,” including anyone who feels they have a connection to Maggie. The lack of discipline or careful consideration—such a contrast with what we’re about to see from the Saviors—is so extreme that Carl has to resort to locking Enid in a closet to prevent her from coming with them because she’s recently been bonding with Maggie. Instead of, you know, Rick just saying who should and should not come. It also means that somehow Father Gabriel, who until very recently reacted to any and all violence by covering his ears and murmuring “please don’t hurt me” is now in charge of Alexandria’s defense.

Good thing the Saviors’ plan doesn’t involve attacking Alexandria directly. Instead, what they do is block off every possible route between Alexandria and the Hilltop with various roadblocks that intensify in size and psychological impact.

First, it’s a bunch of guys with guns, holding a badly beaten captive who they announce as the last survivor of a community called the Library that dared to rise up against the Saviors’ dominance. Then it’s an even bigger group, brandishing even more guns, showing just how many people the Saviors have at their disposal.

Then it’s a group of walkers chained across the road, which someone points out is a really hard thing to create and involves a lot of people and organization. Not only that, but one of the walkers is wearing Michonne’s dreadlocks, and another has Daryl’s crossbow bolts. Dun-dun-dun.

Eventually, they come to a roadblock made from piled logs, which means the Saviors have access to heavy machinery. And while they’re waiting there, the Last Librarian is tossed over an overpass, hanging by his neck—showing that the Saviors also have the capacity to track them and get one of their teams quickly from one place to another. And then the wall of logs gets set on fire.

The end result is to funnel Rick & co. into only one option: abandon the RV (they give it to Eugene to drive around and he immediately gets himself captured yet again) and push on through the woods. Which is exactly where the Saviors want them, guiding them with their creepy whistling toward a clearing where the rest of them, dozens, maybe hundreds of them, are waiting. Along with the captive Daryl, Rosita, Glenn, and Michonne—who have been caged there the whole time, proving that the Saviors’ plan was so good that they knew from the start where they’d all end up.

And waiting there as well is Negan, finally revealed as the terrifyingly charismatic leader of the Saviors, and his barbed-wire-wrapped baseball bat, Lucille.

Negan is simply the scariest bad guy yet on The Walking Dead, and a lot of that lies in how charmingly evil he is. He struts and threatens and gloats, and is rivetingly dangerous. (I find it hard to imagine any actor but Jeffrey Dean Morgan doing quite such a good job at this—he’s flat-out spectacular.)

But even more than all of this, what makes Negan so compellingly scary is that he’s not only coming at them from a position of total physical and tactical dominance—our heroes have no moves left, and can only sit there on their knees staring wildly in panic and despair—but he’s also in a position of moral strength. From his perspective, he’s in the right here, and it’s pretty hard to dispute him. Alexandria attacked the Saviors, and killed many of them, (almost) entirely unprovoked.

It’s possible, in fact, to imagine a version of this story in which the Saviors are the heroes and Alexandria the villains. The show’s moral universe would remain exactly the same. Just as Rick has constructed survival-of-the-community justifications for almost any kind of evil-seeming act, it is possible to imagine a narrative in which Negan’s principles, like demanding fealty from the communities he dominates, are morally defensible ways of protecting his own people.

Everything that our heroes have done since discovering the Hilltop and deciding to attack the Saviors, then, has brought us to this moment on their knees, waiting for Negan to pick someone to beat to death. The Saviors’ plan, in which every roadblock eventually leads them here to this clearing, is also a metaphor for the second half of this season, in which every decision likewise led them here. (Some of them incredibly bad decisions, embedded in even worse episodes.)

Seems like they should have at least considered listening to Morgan, the lone dissenting voice from their plan to attack the Saviors. There’s always another way, he said. And nobody listened—including me. Morgan’s pacifism is and has always been stupidly simplistic, but that doesn’t mean he wasn’t right.

A fact that’s complicated by the episode’s B-plot, in which Morgan finds a wounded Carol and tries to get her to return to Alexandria for treatment. But Carol has gone full death-wish on us now, and runs away, while Morgan chases her on a horse he conveniently finds. Eventually, the last of the Saviors Carol attacked catches her and starts torturing her to death, with Morgan riding up just in time to go against every one of his principles and unload six bullets into the guy. Seems Carol was right—in this world, you can’t be a pacifist and also care about people.

But taken to its other extreme, that conclusion is what eventually led Rick & co. here, as Negan captivatingly swaggers his way down the line, chanting eeny-meeny, pointing Lucille at each of them in turn: Abraham, Sasha, Eugene, Rosita, Michonne, Daryl, Glenn, Rick, Aaron, Maggie, Carl. Choosing one to begin pummeling, with a sickening squelch of a sound. And we won’t know who it is—or whether there is any way out of this devastating situation for our morally compromised heroes—until October. 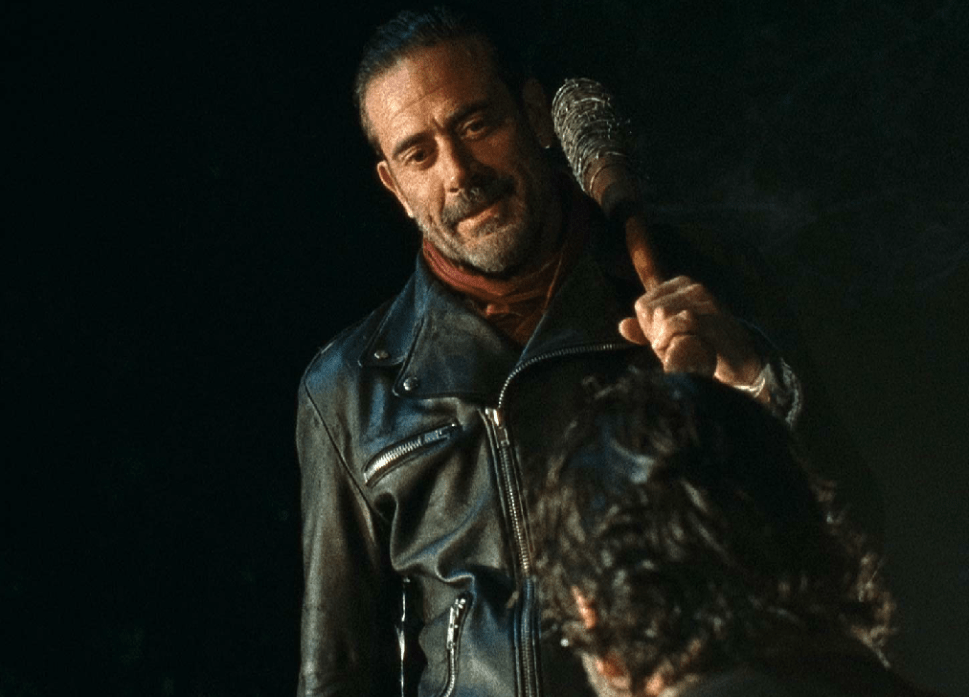