Anyone familiar with the art world knows that there exists a complex, incestuous relationship between fine art and finance. Both deal in valuing things that can be hard to objectively appraise, and both can be confoundingly volatile. Plus, finance dudes, with their insatiable appetites for wealth and status, are flocking to art galleries and auctions these days.

Two weeks ago his show of 20 paintings opened at HG Contemporary in Chelsea. The exhibition, suggestively titled “Inside Wall Street,” has a three-fold mission. The works look at the inside of his algorithm (the intellectual property that built his hedge fund into a very successful one), the inside of his fund, which he wound down recently to focus exclusively on art, and inside Wall Street itself.

When I meet Mr. Saiers, he is overseeing an installation of his paintings at a massive TriBeCa mansion. That night, the art will serve as purchaseable decoration at a tasting of Louis XIII cognac that goes for about $3,000 a bottle. Wall Street types typically bring big clients to this type of thing, he says, and Wall Street types are the main folks who buy his art (in fairness, they are some of the major consumers of art, period). Some of the paintings have already sold at previous tastings. Ah, capitalism.

Before meeting Mr. Saiers, I’m fairly skeptical about this ridiculous-sounding premise—“I paint financial crashes.” It’s got to be a gimmick or a glamor project, at best. Some ex-Wall Street guy who is probably financing his own art—what could be more self-indulgent?

So I’m surprised to learn that his paintings are conceptual reflections on the historic events that most concern him, and which should probably most concern all of us: times when financial markets cease to make sense. While 2008 is an obvious instance, he is also very interested in the hyperinflation of 1923 Germany and the closure of stock exchanges during World War I. The abrupt devaluation of the deutsche mark in the early 1920s arguably spawned World War II, and the NYSE’s four-month closure during the First World War is the longest disruption of trading on record.

Mr. Saiers is thoughtful and unassuming, clad in sneakers and a T-shirt. He couldn’t be further from the douchebag banker archetype, and he’s also a good painter.

His works look to be descended from Hans Hofmann’s push-pull, New York school of spatial abstraction but with a severe, diametric twist. He pits organic drips and raw brush marks against opposing fields of geometric shapes. He has no formal training as an artist but says he watches YouTube instructional videos on painting from time to time—an adorably gauche confession.

One piece on view at the tasting and the gallery show is called Icarus Strangled. “It’s about the wings of distribution,” Mr. Saiers explains. “There is a derivative called the strangle.” A strangle would pay off if the market moves rapidly either way. The investor only loses out if things remain calm. It’s a risky proposition. And as we know, the mythological Icarus flew too close to the sun, and his wings fell off (“one of the great risk management flaws of all time,” Mr. Saiers says, deadpan, without even pausing to let his joke hit. Or is he joking?). He furthered the metaphor by putting the painting under a heat lamp that approximated 10 years of sunlight.

We’re Not in Kansas Anymore is about the 2008 financial crisis that kicked off with the implosion of investment bank Lehman Brothers (for the record, Mr. Saiers thinks the government should have bailed them out). Braille-like lettering symbolizes the systemic blindness that created the crisis, he says—blindness of regulators to the realities of modern finance, blindness of ratings agencies to the real risks of pooled mortgage-backed securities—while circles and squares represent the problem of predicting how financial markets will behave. They reference the classic problem known as “squaring the circle,” which is the idea that you could make a square with the same area as a given circle. It is impossible, but you can get very close, Mr. Saiers explained—just as it’s impossible to anticipate financial markets, though you can make very smart guesses.

Mr. Saiers was someone who was very good at making those guesses for many years. He worked as what is known as a prop trader for UBS and Deutsche Bank before he started his fund, which was called Saiers Capital. Prop trading is when a bank uses its own money to make investments on its own behalf. (The practice is now largely discouraged by the Dodd-Frank legislation, due to its role in the recent financial crisis). While working at Deutsche Mr. Saiers read in the paper that the bank planned to wind down its prop trading desk, so he moved to Alphabet Management, a hedge fund he later took over. It became Saiers Capital.

Mr. Saiers grew up all over the world, including in Ghana and Swaziland, because his father worked for the government as an economist. His family returned to the U.S. when Nelson was a teenager and settled in suburban Virginia. He made a habit of visiting the Smithsonian and nourished an abiding interest in art—but his first calling was mathematics. He attended the University of Virginia and began publishing research papers in math by his junior year. That same year he read the book Liar’s Poker, finance-for-the-masses author Michael Lewis’ account of his time as a bond trader in the 1980s. While Mr. Saiers had intended to become a math professor, he realized that rather than make $40,000 a year, he could make half a million. He completed a Ph.D. in math, which generally takes a minimum of five years, in one year following his graduation and went to work on Wall Street.

“I was curious what kind of game could merit people making millions of dollars,” at the age of 25, he said. He decided it would be a fun game to play.

“I’m not materialistic,” he clarifies. He wanted to make money so he could spend his time doing math without the risks an academic career involves (“If you want to work on a really famous problem, you may fail,” he says). With money, he’d have no accountability about what problems he would work on and all of his time to structure himself. He says in the future, he might return to doing pure math with a lot of his time. It might take awhile to get his chops back, but given his history, it seems likely he will.

But for now, he is focused on art. “The art…speaks to the complexities that you deal with in finance, but I’m more curious about art than I am about finance, now.” He said he’s sold about $100,000 worth of art so far.

His next series is as ambitious as painting financial crises and may sound as preposterous on its face.

“I want to use math to explain Dante,” he says. By now, I’m not sure he won’t succeed.

“Inside Wall Street” is open until May 3. 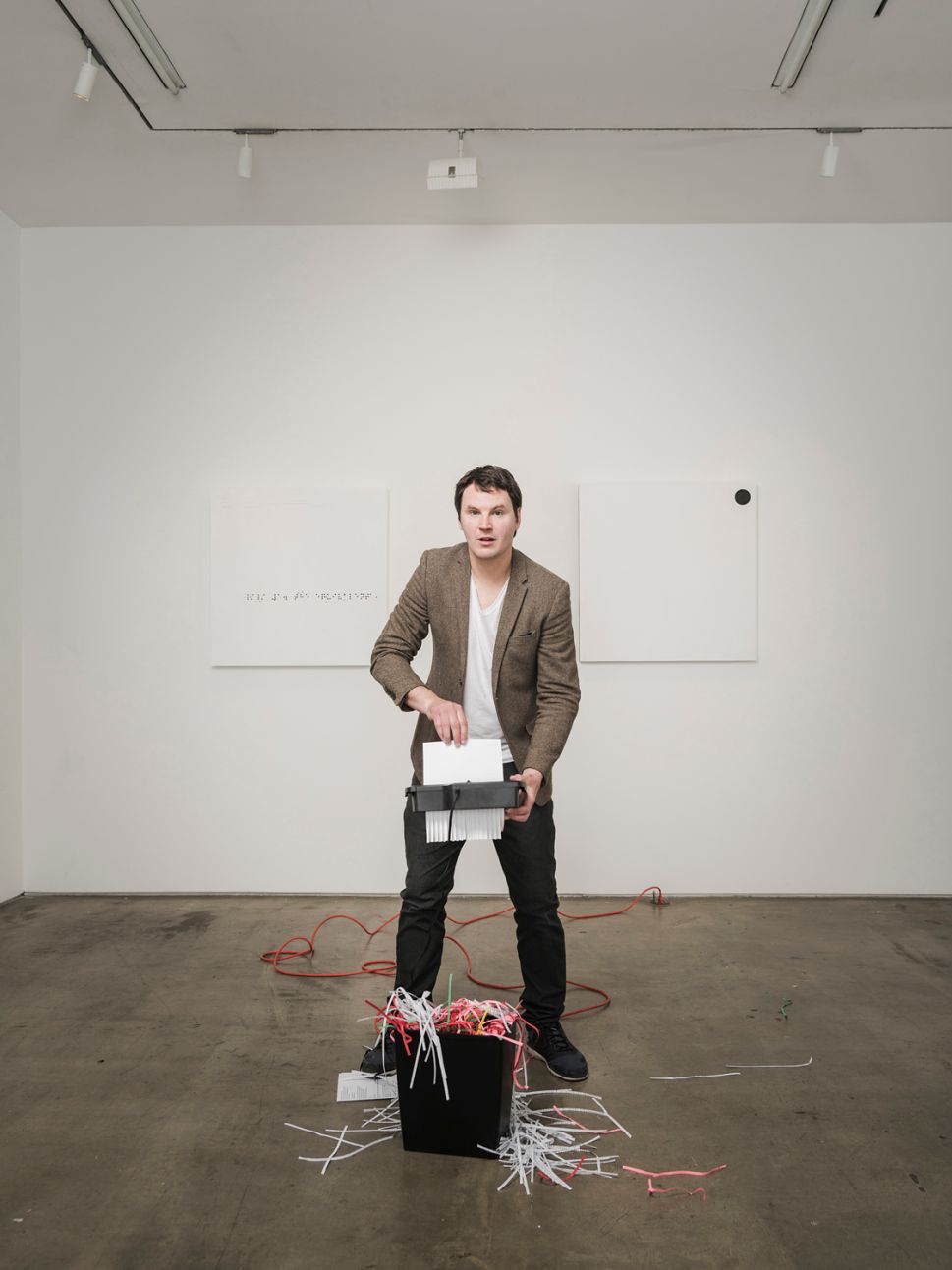