The city’s mayor may love baseball, but it seems that the city’s baseball fans don’t really love the mayor.

Mayor Bill de Blasio’s appearance on the field ahead of the Mets home opener this afternoon was met with a chorus of boos—for the third year in a row.

Mr. de Blasio, a Red Sox fan who remains loyal to his Boston home team but has adopted the Mets during his mayoralty, wore the jersey of Mets catcher Mike Piazza, who was selected for the Hall of Fame this year.

He was hit with the chorus of jeers as his name was called at the start of pre-game ceremonies. Mr. de Blasio was first in a list of dignitaries that included Police Commissioner Bill Bratton and Fire Commissioner Daniel Nigro, but it was Mr. de Blasio that was met with the crowd’s ire. The booing was about as long and loud as the one the fans gave the visiting team and divisional rivals, the Philadelphia Phillies.

The mayor appeared thoroughly unfazed by the crowd’s reaction, and seemed to be having a fine time cheering for the Mets lineup, mingling with NYPD and FDNY officers on hand, and watching the raising of the National League pennant.

Mr. de Blasio has appeared at each Mets home opener since he was elected—and even threw out the first pitch in 2014. Unsurprisingly, given his Red Sox fandom, he has not made a public appearance at Yankee Stadium for a Yankee game—though he has attended soccer matches there.

He’s certainly not the first mayor to be jeered by sports fans—plenty of his predecessors have gotten the same treatment. Last year, his office deemed it “a mayoral tradition to be booed on opening day.” It appears Mr. de Blasio, a baseball fanatic, is willing to put up with it to be part of pageantry of an opening game.

“It wouldn’t be a New York baseball game without a few boo-birds in the stands,” spokesman Austin Finan said today.

The mayor wasn’t the only city employee on the field today. The first pitches thrown out by an NYPD officer wounded in the line of duty and an FDNY officer. The game ball was placed on the mound by the family of Joseph Lemm, an NYPD detective killed fighting in Afghanistan.

Mr. de Blasio has made a habit of attending Mets games—showing up to several during the Mets playoff and World Series run last year. He embraced his role as the city’s top baseball fan, ripping the villain of last year’s post-season, Chase Utley, for a dirty slide that broke the leg of Mets shortstop Ruben Tejada, and calling in to WFAN radio to talk baseball with the city’s Sports Pope, Mike Francesa.

The mayor will have little respite from being roasted this weekend: tomorrow he’ll appear at the annual Inner Circle show, where political reporters will poke fun at him in a musical and he’ll respond in turn.

This story has been updated with comments from the mayor’s office. 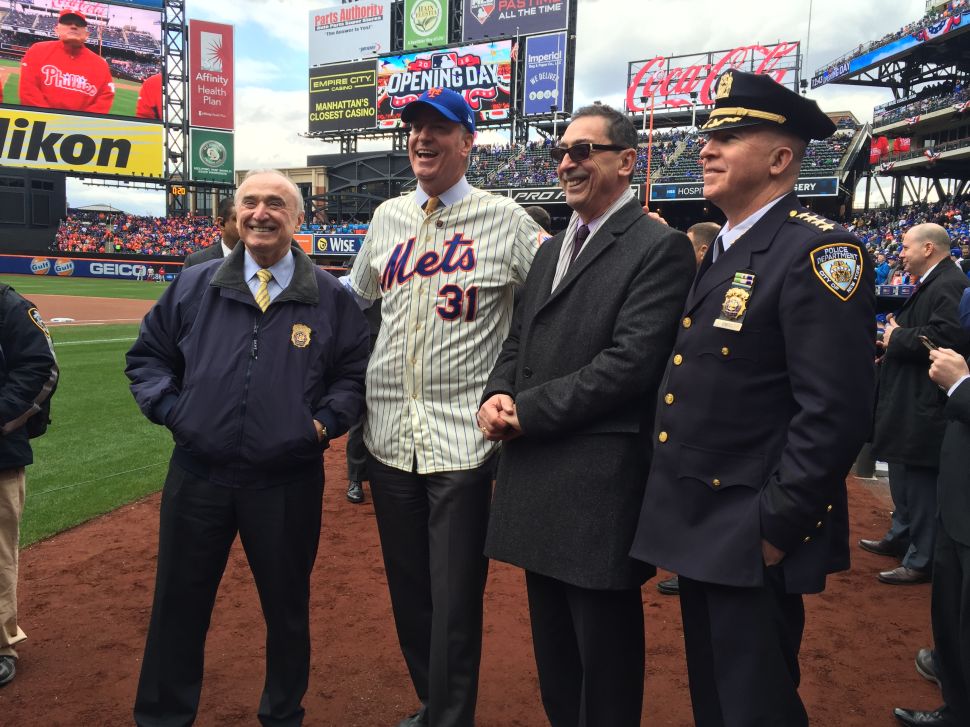