April 4, 1975: Bill Gates and Paul Allen co-founded Microsoft, which initially focused on developing personal computers but branched into software in 1990 with the Microsoft Office suite, which is now used by more than one billion people. Microsoft then expanded into the game market in 2001 with the Xbox console. In recent years the company has focused on mobile thanks to the Windows Phone and the Surface tablet. For all its success, Microsoft has been the subject of much government scrutiny because of its operating system: A 2001 antitrust lawsuit found that the company monopolized the personal computer market by automatically bundling its OS with the Internet Explorer browser—since every Windows user also used IE, the company had an outsize market share. Microsoft settled the case after agreeing to share its software protocols with outside companies.

April 7, 1948: The United Nations established the World Health Organization (WHO).  The agency’s main focus is international public health, in particular eradicating diseases like smallpox, HIV/AIDS, Ebola and most recently Zika virus. Equally notable, however, is that since its earliest days the WHO has used technology to further its cause—indeed, one of its mandated core functions is to “provide technical support” and build “sustainable institutional capacity” for its member nations. Among the WHO’s first projects was a disease information hotline which used telex, an early form of text messaging. In recent years, the agency has utilized an online disease surveillance system, where hospitals can report cases of and deaths from communicable diseases, so the WHO can get this information to the general public within hours.

April 8, 2008: The 50-floor, two-towered Bahrain World Trade Center, which was the first skyscraper in the world to integrate wind turbines into its design, opened. The towers are linked via three bridges, each of which contains a 225 kilowatt turbine (675 kilowatts of wind power capacity in all). Both towers were oriented like sails, so wind could be funneled through the gap between them. The turbines provide between 1.1 and 1.3 gigawatt hours of power each year, which is 11 to 15 percent of the towers’ total power consumption and equivalent to lighting about 300 homes. The complex has received several awards for sustainability, including a LEAF Award for Best Use of Technology Within a Large Scheme.

April 9, 1959: The “Mercury Seven” astronauts were selected for NASA’s first human spaceflight program, appropriately called Project Mercury. Scott Carpenter, Gordon Cooper, John Glenn, Gus Grissom, Wally Schirra, Alan Shepard and Deke Slayton were chosen from among 500 test pilots who applied—only Mr. Glenn is still alive. All seven men got spaceflight experience, though Mr. Glenn received the most publicity as the first American to orbit the Earth. Shepard, the first American in space, was also the only one of the “Mercury Seven” to walk on the moon. NASA used smart optics when introducing the astronauts to the public—since space travel was still an alien concept, the men wore civilian clothes at the press conference instead of spacesuits. 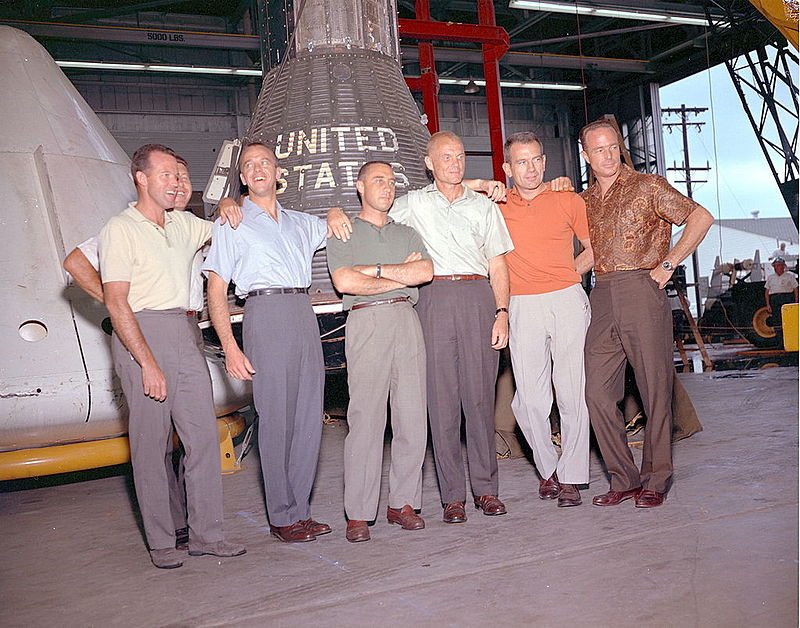