Every year on June 20, the city of Yulin in the Guangzi province of China holds an unofficial dog meat eating festival. Between 10 and 20 million dogs are killed in China every year, and the festival in Yulin—which slaughters around 10,000 dogs—has become symbolic of the cruelty and inhumane manner in which dogs are treated around the world.

In 2015, immense pressure was placed on Chinese government officials, and with the help of celebrities like comedian Ricky Gervais promoting the hashtag #StopYulin2015, over four million signatures were acquired on a digital petition to stop the festival. A year earlier, in 2014, activists made significant progress when Yulin City officials distanced themselves from the festival, refusing to serve as its sponsor.

While in most parts of the world there exists a bond between humans and dogs that prevents the slaughter of dogs for their meat, in Yulin and other parts of China eating dogs is the norm. In their defense, Yulin locals argue the practice has been unfairly scrutinized. Of course, it is true that other countries eat animals—but the dog-meat trade in China is notorious for using stolen pets and strays. A report conducted by Animals Asia in 2015 found most dogs were obtained for the dog-meat trade through theft, the capturing of strays and purchasing surplus dogs from retailers or dog shelters. Dog farming for meat consumption, the group found, is rare—due to the high costs of feeding the dogs and keeping them healthy. This year, animal activists are once again pressuring China to end the festival and enact legislation to make the consumption of dogs and cats illegal.

While most people in China will never eat dog, the meat remains a delicacy in several regions of the country and the industry takes animal abuse to magnitudes that are unheard of in most other parts of the world. Some restaurant owners kill dogs with a club under the belief that the adrenaline produced by the animals’ pain and fear makes their meat taste better. Backlash has only increased the resolve of many Yulin residents to preserve the festival, according to a 2014 Vice News report.

If we can’t respect a species that has such a close and personal relationship with us, no other relationship on this planet stands a chance.

The argument that there is less outrage over the consumption of other animals is invalid when it comes to dog meat consumption, and ethnocentrism is no excuse to pardon the horrific killing methods rampant in China.

Dogs and humans evolved in tandem and have developed a co-dependent relationship ever since the animals were domesticated. In fact, our species are so intertwined that a 2013 study by the University of Chicago found dog and human genomes have been evolving parallel for thousands of years.

“They have hijacked the human parental pathways in the brain, making us care about them in almost the same way we care about our children,” wrote primatologist Dr. Frans de Waal in his most recent book, Are We Smart Enough To Know How Smart Animals Are? “Dog owners who stare into their pet’s eyes experience a rapid increase in oxytocin-a neuropeptide involved in attachment and bonding.”

No other inter-species link with oxytocin has ever been observed, making the bond between dogs and humans truly unique—so it should be no surprise that a festival celebrating the killing and eating of dogs has garnered such intense criticism. The Chinese government has placated animal activists by forcing the festival to operate behind closed doors, which most likely incites further abuse and inhumane treatment of the animals.

With the 2016 festival approaching this June, hopefully the outrage from the international community will provoke China to take meaningful action and ban this practice once and for all. It is not merely a matter of cultural tastes; if we can’t respect a species that has such a close and personal relationship with us, no other relationship on this planet stands a chance. 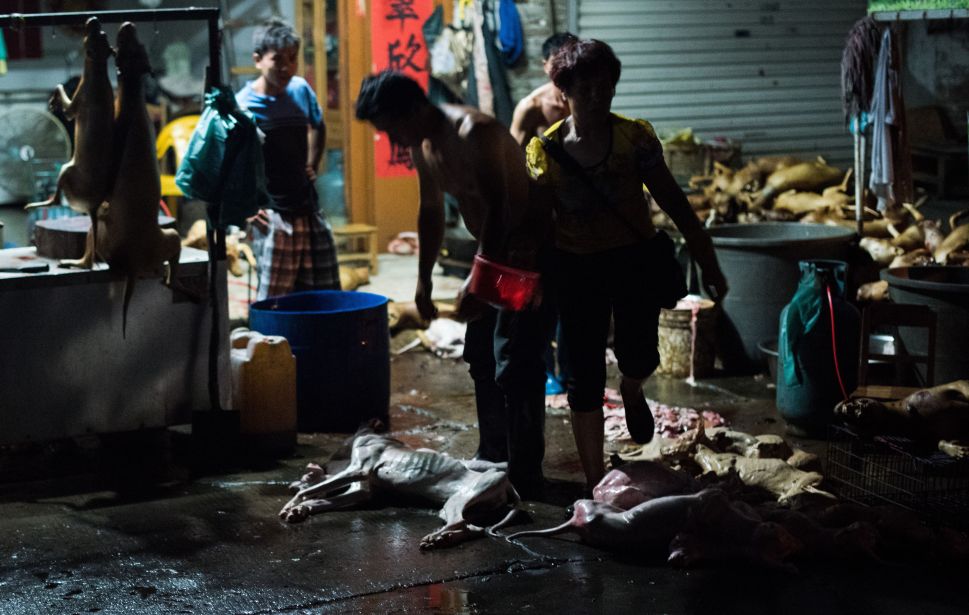