Writer-director Jeremy Saulnier (Blue Ruin) calls this blood-soaked opus a “horror thriller,” although I can’t imagine why. Green Room is horrible, all right, though about as thrilling as a fried grasshopper canapé. It played a year ago in the giddy “Midnight Madness” section of the Toronto International Film Festival reserved for freak shows normal audiences cannot sit through, and now it’s finally opening commercially for normal audiences to prove it. Proceed at your own risk.

In Green Room members of a screaming punk rock band (I use the word “band” advisedly) called The Ain’t Rights find themselves on the road broke, exhausted, starving and ready to cut one another’s throats after a canceled gig. Never mind, there are plenty of creeps eager to do the job for them, as they are about to find out. After playing one final show in the Oregon backwoods to avoid siphoning gas from somebody else’s SUV for the long drive home to Virginia, they find themselves playing for an audience composed of neo-Nazi skinheads who don’t much care for the band’s repertoire, including a cover of Dead Kennedy’s “Nazi Punks Fuck Off” that invites mayhem.

Throats are slashed and heads blown off as the funky quartet led by ace actor-turned-bass player Anton Yelchin struggles to survive in a standoff with the club’s owner (a drug-dealing self-appointed fuhrer played by Patrick Stewart, of all people) and his brutal gang of evil white supremacists. Joined by a surprise ally (Imogen Poots with a Chelsea haircut), the musicians lock themselves in the backstage green room with a stash of heroin and a dead girl with a knife in her throat. Or is it a screwdriver? Before the carnage ends, the entire cast has been tortured, mutilated and murdered by so many weapons it’s hard to keep them straight. When the shotguns, box cutters and machetes run out, it’s time to cue the flesh-eating attack dogs.

Patrick Stewart’s suave charm and classically trained speaking voice add a special note of gruesome malice to the role of a modern Hitler, but the role isn’t interesting enough to make his change-of-pace turn pay off, leaving Anton Yelchin to steal the show as the sensitive, soft-spoken bassist. Ms. Poots is around for no other reason than décor, but the real star attraction is the funky, menacing roadhouse set by production designer Ryan Warren Smith with its claustrophobic green room and a warren of dark escape hatches that all lead to death. Not much depth, but a lot of style. 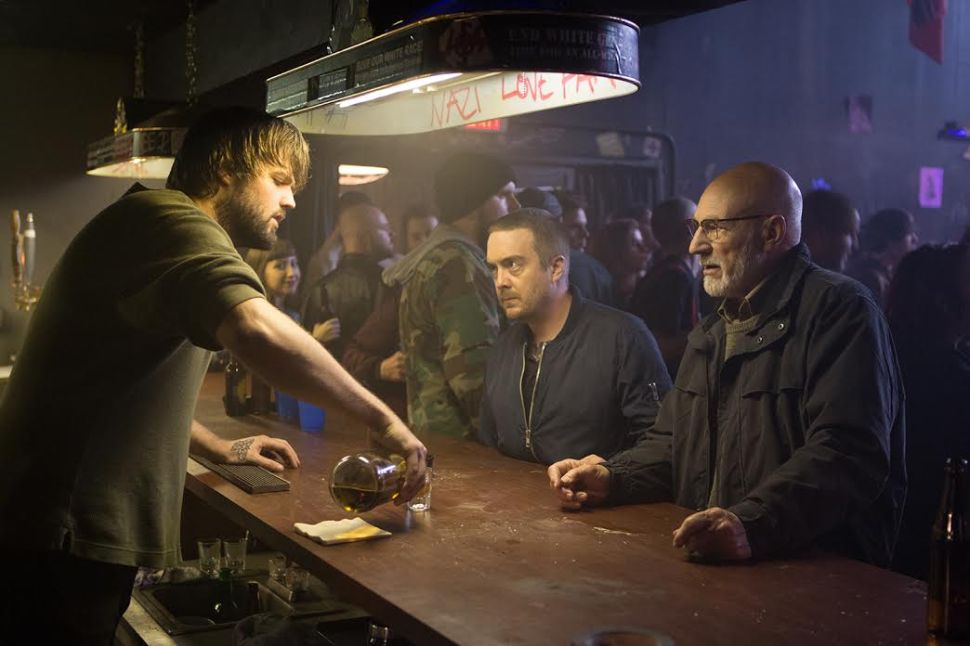