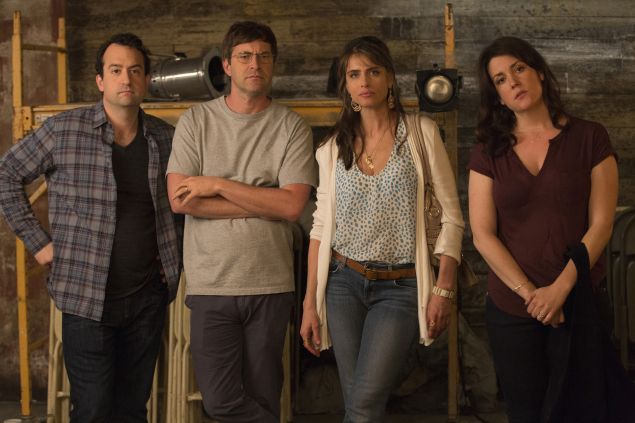 Togetherness is officially over, but at least the show ended with everyone getting what they wanted. The long neglected kids got their united parents back, and it only took two broken arms and a totaled car to get that ball rolling. Michelle wrestled her charter school vote away from Evil Gwyneth with a last minute “interactive” Fringe festival-type show that looked like it was set in the basement of a West Philly punk house. Michelle finally got Brett to finally stop taking their marriage hostage, with his tearful plea to come home. And finally, Tina probably got knocked up, and by Alex no less.

How do we know she got knocked up? We’ve all seen television before and this episode enacted Checkov’s Uterus law where a woman with her legs up in stirrups at the gyno’s office in the first act must get inseminated by the third act. Never mind the fact that Tina probably wouldn’t get pregnant on the first shot given that she was already in the zone of “geriatric pregnancies” and was working with “elderly follicles.” That being said, Alex was particularly adorable rapping to baby Frankie while Tina was getting under her hood checked out. If that’s not a foreshadowing for his character’s impending season 3 fatherhood, I don’t know what is. Plus, there was that pregnant ( har har) pause where Tina asked Alex if he had a condom while he was trying to liberate her from her Rainbow Brite by way of Frank Herbert hybrid costume and he reacted like that was the most ludicrous question in the world. Hey, if Alex does knock Tina up, at least he has all that sweet TV money coming his way, perhaps she can find her way back to the hot tub lifestyle she enjoyed with Larry. It’s a premise to consider when we’re all writing our Togetherness season 3 fan fiction.

Another aspect to consider in our season 3 fan fiction is what aspect of his relationship with his wife that Brett will end up taking hostage and ultimately resolving on his timetable alone. This time around, Brett’s lost some leverage in his extended marital hiatus when Michelle found out he essentially constructed the start of a new relationship around a Bruce Hornsby joke with a girl with a nose ring. He was also forced to bridge some of the rift between him and Michelle when she needed to commandeer “Stupid ass Dune” in order to make some kind of Hail Mary presentation and wrestle the charter school vote away from Evil Gwyneth, her French language curriculum, and her buckets of lawyer buddy cash.

However, if there’s anything that can help Brett see that he should probably end his time travel back to high school and actually make a decision on the state of his marriage, it’s the fact that his daughter absolutely fucking hates him. Well, she absolutely fucking hates both of her parents after they failed to show up for her in the emergency room when she broke both of her arms from a freak monkey bars accident. It’s not like Brett and Michelle didn’t try their damndest to get to their kid. In fact, Brett tried so hard that he plowed his car into a guardrail while trying to speed down the shoulder during gridlock traffic. However, now that his car is crunched, maybe he’ll finally ditch the Uber gig and go back to the career that actually supported his family in comfort.

You know who does a great job of parenting little Sophie during her playground accident? Tina and Alex. Gonna assume that further foreshadows their impending parenthood in the non-existent season 3.

Anyway, with the threat of Evil Gwyneth’s charter school coup looming, Michelle comes up with the last minute idea to turn the failed Dune musical into an “interactive” educational puppet show that will somehow trump the exceedingly legit and intellectually rigorous coursework that Evil Gwyneth put together. The end result is kind of ridiculous. Dangling people from ceilings and throwing glitter around while wearing dragon costumes isn’t how schools work. But hey, the kids seem to like it and Evil Gwyneth’s stodgy wine and cheese Le Petit Village presentation was boring them to tears. Plus, it further forces Brett and Michelle to unite as a team working towards the common goal of building a neighborhood school that they can actually afford.

And hey, what do you know, Michelle wins the vote! However, she’s probably now locked in to creating a school that is essentially Baby Burning Man. Plus, Evil Gwyneth is the one who raised all the cash, can she now just walk out the door with all the donations from her rich friends and start her own blue blood academy that will start some kind of snob vs. slob 80s teen comedy rivalry with the hippie burnouts at Michelle’s puppet school? And once Evil Gwyneth walks out with all the money, doesn’t that leave Michelle exactly where she was after David left? Or maybe Evil Goop can’t take the away the money she raised and now she has to stew in the fact that she’s basically funding a discount Jim Henson’s Workshop. Let’s hope puppetry makes it on the SAT by the time these kids get to high school. Anyway, there’s some more fodder to consider for our season 3 fan fiction.

The failures of crashing their car and losing the confidence of their daughter and the success of winning the charter school boat via their Dune theater nonsense finally prompts Brett to pull his head out of ass and tearfully promise to stop punishing Michelle for her one indiscretion.

“You apologized enough” could very well our generation’s “you complete me.”

That being said, farewell, Togetherness. You left us too soon, but goddamn if this wasn’t a touching goodbye. 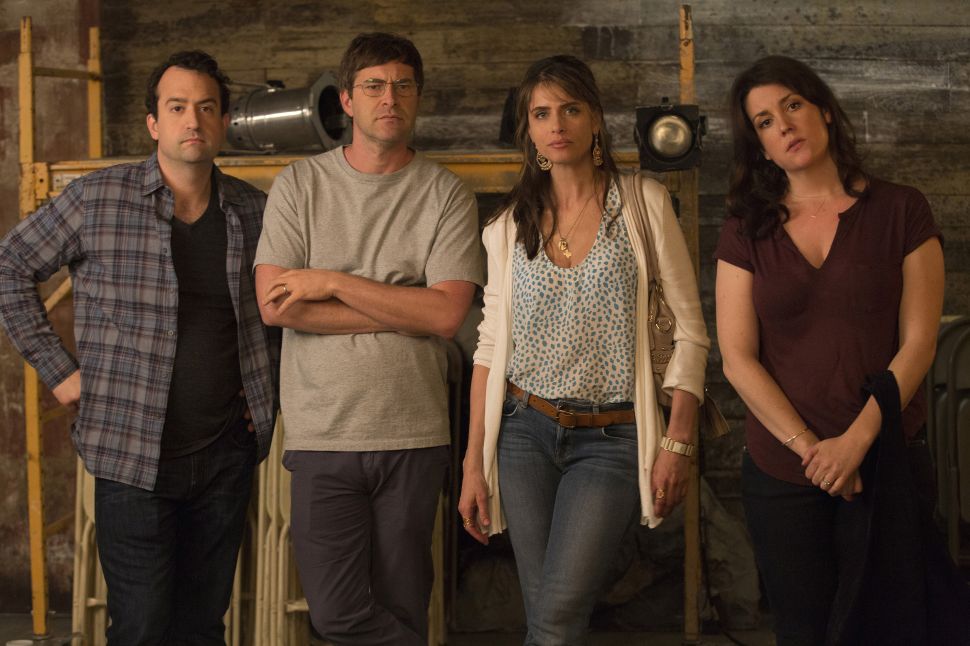