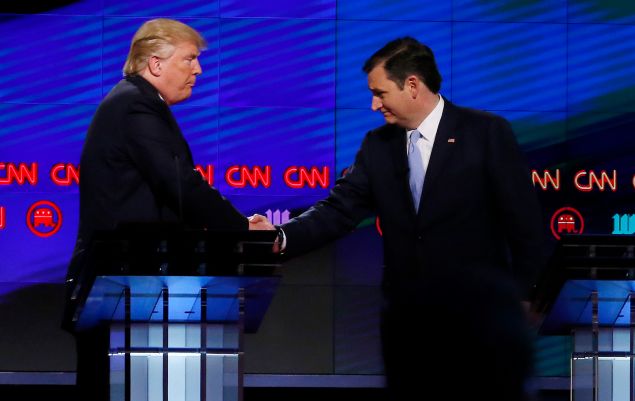 U.S. presidential nominating contests are sort of like giant, north Atlantic icebergs. We only see the tip of them sticking out of the water, and we have no idea what they are like under the surface until our ship hits one of them.

The American electorate is about to get a crash course—pun most definitely intended—and this is particularly true on the Republican side. The Democratic contest also has its many unseen intricacies, but with Hillary Clinton far enough ahead in pledged delegates to withstand a late surge by Bernie Sanders, the Democratic ship is likely to miss the iceberg this time. Mr. Sanders would have to win more than 62 percent of all remaining delegates up for grabs in primaries and caucuses from this point forward just to move ahead in elected delegates, and this says nothing of the 715 unelected “super delegates” who currently favor Ms. Clinton by huge margins.

But the Republican ship appears to be on course now for a head-on collision, and the results could bring to mind past disasters, such as the infamous 1968 Democratic convention in Chicago that led to riots in the streets, or maybe even the disastrous 1912 Republican convention, which ended with former president Theodore Roosevelt splitting the party and sinking its hopes—much like that iceberg split the Titanic wide open the same year and sunk it to the ocean floor.

Even if all goes well for Republican frontrunner Donald Trump between now and the end of the GOP primary process on June 7, getting to the required majority of 1,237 delegates will be extremely difficult. But it is clear that things are not going that well for him at the moment. He just suffered a big setback in Wisconsin, and even though he is poised to win a number of states in the northeast—including delegate-rich New York on April 19—The Party Crasher’s current estimate is that he will end the primaries at least a dozen delegates short of a majority, perhaps as many as 80 shy of the required number.

This does not even take into account the fact that the primaries and caucuses are often multilayered processes, and that much of their business takes place well out of public view, weeks or months after the elections are held. The initial primaries or caucuses, in many states, are followed by county and state conventions where the final delegations are chosen, and the outcomes can be much different than what the voters thought they had determined at their polling or caucus sites.

Both frontrunners have seen this happen in 2016. In Nevada, Sanders supporters showed up in larger numbers to county conventions in Nevada than Clinton supporters, which means he likely will end up with more delegates from the Silver State than he earned in his statewide loss there in February. And in Louisiana, it appears Ted Cruz will have more delegates than Donald Trump despite Mr. Trump’s victory in the Pelican State primary last month.

In fact, Mr. Cruz and his supporters have shown themselves to be much more adept at the “postgame” roundup of delegates than the Trump team has been, which means Mr. Trump could well command fewer delegates headed into the convention than he appears to have won during the primary and caucus process.

Mr. Cruz has alienated so many important people in his own party that if he were killed on the Senate floor, no Senator would convict his murderer.

All that is anywhere close to certain at this point is that Mr. Trump and Mr. Cruz will enter the Cleveland convention with the two largest blocks of delegates. It appears likely Mr. Trump will have at least 1,100, and Mr. Cruz will have something in the neighborhood of 800 delegates. Neither block will get either candidate to the 1,237-delegate majority required to win the nomination.

It is also well understood that many Republican Party bigwigs are by no means pleased with either of their leading candidates. They fear electoral catastrophe and/or wide deviations from party orthodoxy if the unpredictable Mr. Trump gets the nod, and Mr. Cruz has alienated so many important people in his own party that a fellow Republican Senator once said if he were to be killed on the Senate floor, no jury made up of Senators would convict his murderer. On almost a daily basis, the devoted reader of political news can find new articles about how “establishment” Republicans hope to simply deny anybody a majority on the first ballot and then insert a compromise candidate during subsequent balloting, when delegates are freed from their initial pledges and can vote as they see fit.

This is why John Kasich, who will enter the convention hundreds of delegates behind both Mr. Trump and Mr. Cruz, is still being taken seriously as a contender despite having won only a single state—his own—and being quite unlikely to add many more victories to his total. It is also why Speaker of the House Paul Ryan—despite his requisite, if laughable, denials of any interest in the job—is giving speeches and producing slick video footage in which he talks soothingly about “unity.” If you think Mr. Ryan isn’t making a play to be the compromise candidate at a brokered convention, you might also be interested in buying a few acres of tropical, beachfront property in Montana.

It should be clear, then, that if establishment Republicans can deny either Mr. Trump or Mr. Cruz a first-ballot win, they will happily dispense with both and settle on somebody like Mr. Kasich or Mr. Ryan. The two leading candidates, after months of winning primary after primary and caucus after caucus, could very well both leave Cleveland empty-handed, with a candidate who won just one state—or even one who never entered the race and won no votes at all—grasping the prize.

If this seems an unlikely scenario, keep in mind that this is the way political party conventions were done for most of our nation’s history. The notion that party nominees should be determined by the votes of the people, in primaries and caucuses across the nation, is a very new one, historically speaking.

It may seem ludicrous that these two could bury the hatchet anywhere except in each other’s skulls—but sooner or later, they’re both going to get rolled.

Prior to the 1970s, few states even held binding primaries or caucuses. Most states simply chose their delegates in closed-door, party-dominated events, and it was very rare that a convention began with anyone knowing who the ultimate nominee would be.

While there hasn’t been a contested convention since 1976, it was very rare prior to that year that any convention went uncontested, unless there was a popular incumbent president seeking reelection. And it often happened that the party conventions settled on previously unknown compromise candidates, some of whom hadn’t even actively pursued the nomination until the convention began. So it is certainly possible that the movers and shakers in the GOP could manage to deny either Mr. Trump or Mr. Cruz a first-ballot victory and then move quickly to put forth another candidate who could achieve a majority on subsequent ballots.

There is only one way that either candidate can ensure himself a place on the ticket in 2016, and it would be as audacious as it might seem unlikely. The plan would be foolproof, and it would put an end to all machinations to “Dump Trump” or “Lose Cruz” in Cleveland.

If Mr. Trump and Mr. Cruz could put aside their heated feud of the past few months and agree to a “unity ticket,” with one as the presidential candidate and the other as the vice-presidential candidate, there would be no way the party could derail them. They would enter the convention with a combined 1,900-2,000 delegates.

Stop laughing for a minute and keep your eyes on the prize, as the saying goes. Yes, it has gotten nasty between these two. Yes, Mr. Trump calls his main opponent “Lyin’ Ted Cruz.” Yes, Mr. Cruz says equally nasty things about the frontrunner. It may well seem ludicrous that these two could bury the hatchet anywhere except in each other’s skulls.

But sooner or later, if it hasn’t already, it is going to dawn on these two that if they don’t join forces, they’re both going to get rolled by the GOP establishment in Cleveland. The only way to stave it off is to get together. They need each other, and neither one is going to have any other viable options.

Two politicians don’t have to like each other to work together in the pursuit of a common goal. By most reputable accounts, nobody in the John F. Kennedy camp had any affection whatever for Lyndon Johnson in 1960. Nonetheless, the newly minted Democratic nominee offered Mr. Johnson the number-two slot because he needed help in Texas and the South generally, and Mr. Johnson took it because it was that or nothing.

Mr. Trump and Mr. Cruz are clearly intelligent men. You may love them or hate them, but you have to admit that Mr. Trump did not build a real estate empire by being stupid, nor did Mr. Cruz attain an Ivy League degree without a certain amount of intellectual brilliance. They can both do the very basic math here and arrive at the same conclusion expressed long ago by another smart man, Benjamin Franklin: they will either hang together, or hang separately. 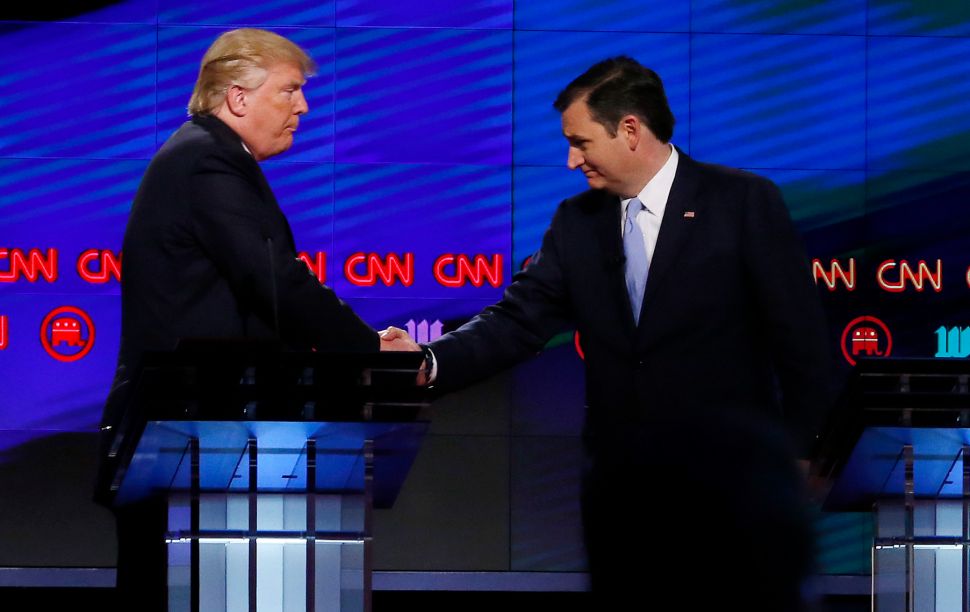