Fourteen years ago, at the 2002 Winter Olympics in Salt Lake City, the famed folk singer Pete Seeger performed as one of several musical acts at an indoor theater.

My press credential got me backstage. In that the 21st century was just beginning, people were still making predictions. In that Mr. Seeger had lived for most of the 20th, I asked his take on the future.

He nodded. He smiled. He liked the question.

Had he lived, he would have seen Democratic candidate Hillary Clinton a favorite to be the nation’s first female president only two years later.

He would have seen Carly Fiorina chosen—prematurely, to be sure—to be the vice-presidential running mate of Republican candidate Ted Cruz.

If he watched television, he would have seen female journalists—like Rachel Maddow of MSNBC and Megyn Kelly of Fox News Channel—enlivening and defining the campaign conversation in the prime-time hours.

They are advancing their careers on their cable channels that cover politics and current events from opposite and partisan points of view. They—and CNN, too—are covering a Republican favorite, Donald Trump, who is, in part, a product of television’s version of “reality.”

Mr. Seeger might have enjoyed this exchange this week between Ms. Clinton and Ms. Maddow in one of those Town Hall interviews. The subject was her rival, Bernie Sanders, and when he should concede the nomination.

Ms. Clinton raised her voice, not unpleasantly, but in a righteously defensive way. She bobbed her head and leaned forward and extended her arms.

Emotionally, she seemed to drop her usual composed pose and show some real feelings. Ms. Maddow leaned back in her chair, a tight smile on her face. She tried to recover.

CLINTON  (sitting back in her chair in a pose of authority): “Look, I have the greatest respect for Sen. Sanders…I have 2.7 million more votes than he has. I have more than 250 more pledged delegates…We share a lot of the same goals…but I am ahead. And let’s start from that premise.”

A better showdown could come on Tuesday, May 17, at 8 p.m. when Ms. Kelly hosts the leading Republican candidate, Mr. Trump, in a one-hour interview not on Fox News Channel but on the Fox broadcast network, the main stage, the one lower on the dial that carries pro football.

More than any other newscaster, Ms. Kelly defined one of the major arcs of the campaign narrative by challenging Mr. Trump in the first debate in August.

Mr. Trump, nearing his 70th birthday, grew up in Queens during the “Mad Men” era. As his fellow borough-dweller Archie Bunker used to sing, “Girls were girls, and men were men.” Mr. Trump was the answer to “What Kind of Man Reads Playboy?” He is a type of a certain time.

“You’ve called women you don’t like, `Fat pigs, dogs, slobs and disgusting animals,’ ” Ms. Kelly told him during that first debate in a statement that was more accusation than question.

“You once told a contestant on Celebrity Apprentice it would be a pretty picture to see her on her knees. Does that sound to you like the temperament of a man we should elect as president? And how do you answer the charge from Hillary Clinton, who is likely to be the Democratic nominee, that you are part of the war on women?”

Of course Trump didn’t like the question, saying later that blood was coming from Ms. Kelly’s eyes and her “whatever.” Earlier this month, Ms. Kelly trekked to Trump Tower and cut a deal for a truce and for a prime-time showdown.

(Cynics are hereby permitted to speculate for just a moment at this point as to whether we’ve all been taken in by a cynical setup here.)

That deal went down just before Mr. Trump swept five Republican primaries Tuesday night and used his victory speech to attack Ms. Clinton on the basis of her gender.

“The only card she has is the woman’s card,” Mr. Trump said of Ms. Clinton. “If Hillary Clinton were a man, I don’t think she would get 5 percent of the vote.”

While he said this, Mary Pat Christie—wife of New Jersey Gov. Chris Christie—seemed to wince and shoot a glance at her husband, who stood at the other side of Mr. Trump and didn’t seem to see his wife. When Mr. Trump concluded, Ms. Christie looked peeved.

One reason for Ms. Kelly’s rising stardom is she works the 9 p.m. hour between Bill O’Reilly and Sean Hannity, two Long Island bully-boys who are pals of Mr. Trump and grovel for him while attempting to diminish Ms. Clinton.

For instance: On Wednesday night, Mr. Hannity played for his three-woman panel a video of Ms. Clinton speaking.

“Well, if fighting for women’s health care and paid family leave and equal play is playing the women’s card, then deal me in!”

Instead of discussing Ms. Clinton’s point of view, Mr. Hannity asked his guests to ridicule her speaking voice, a common way to demean women.

This sort of loaded question is to be expected from a low-brow propagandist like Mr. Hannity, the bottom feeder of mainstream conservatism. He is a sucker puncher who hits below the belt and after the bell.

Mr. Hannity then darkly suggested that Mr. Trump would bring up the extra-marital activity of Bill Clinton, her husband and former president and that this would hurt Ms. Clinton.

“I don’t think Trump has that great of a record when it comes to women,” she said. “Sixty to 70 percent of women find him unfavorable. They don’t like him. Only 58 percent don’t like Hillary.“

At this point, Mr. Hannity and his other two guests began arguing with Ms. McAllister at the same time in a way that silenced her heresy.

A different tone came the next night on CNN when Sally Kohn interviewed Scottie Nell Hughes, a Trump supporter. Like many of the cable shows this campaign, the screens were filled all day with women of all races speaking from all sides of all issues. Some saw no misogyny or sexism from Mr. Trump.

“All that Mr. Trump is doing is neutralizing this gender issue,” Ms. Hughes told Ms. Kohn. “Take out the emotion of gender and just look at policy and who has the best plan for America.

On the audio, you could hear Ms. Kohn laugh—“Huh! Huh! Huh!”—before her face appeared on screen.

“If that’s what you think he’s doing,” Ms. Kohn said, “you keep going ahead and doing it.”

Between spasms of bitter-edged laughter toward her guest, Ms. Kohn spoke of how Mr. Trump “stokes hate” against many groups, including women.

HUGHES: “That’s very sexist of you to say.”

HUGHES: “They (women voters) are actually looking at the policies…not necessarily what body parts they have or don’t have.” 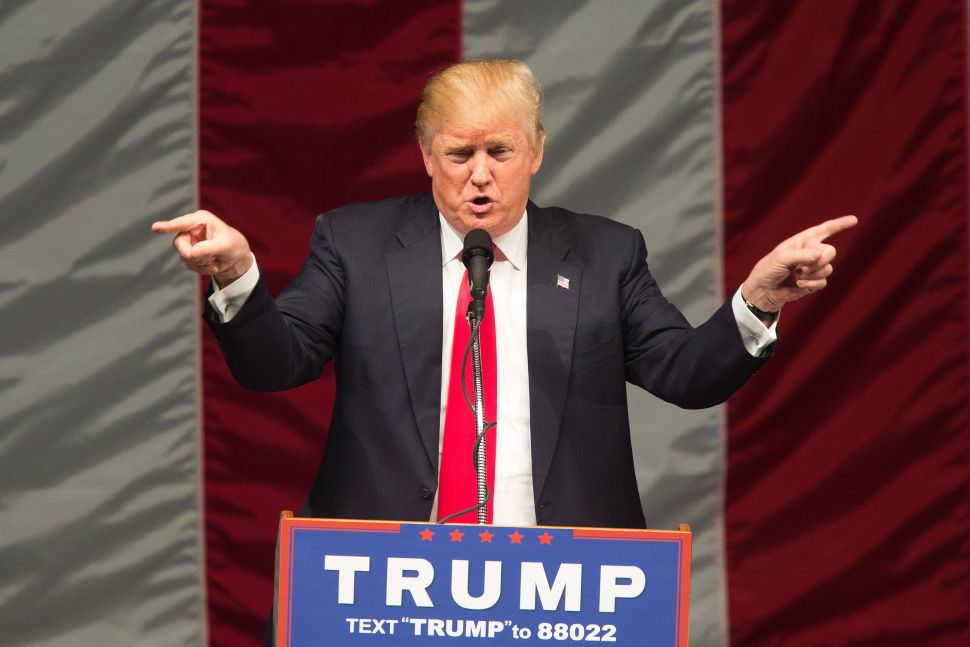