An excerpt from the Uber mailer.

Drivers who work for Uber, a popular ride-sharing app that connects users directly to drivers, are unhappy with a proposition made by Newark Mayor Ras Baraka and the city council to crackdown on the use of such services in the city, particularly at transit hubs like Newark Airport or Newark Penn Station. On Tuesday, Uber will be launching a public affairs campaign to voice opposition to Newark’s move. The company will be aiming to reach Newarkers by both radio and mail.

According to city officials, such services need to be better regulated and drivers should obtain commercial licenses in order to operate in areas like the airport or train station. For Uber drivers, however, the move means is an attack on those registered to drive with the company in the Brick City.

In the mailer, Uber quotes Baraka as saying “Our vision for Newark’s future calls for more self reliance, ingenuity and independence… Jobs mean pride, satisfaction and dignity. Jobs bring hope for a brighter future. Jobs are the key to family stability and self-esteem.” Then, it goes on to blast him for “taking steps to prevent 2,000 Newark residents from earning income driving with Uber” and “killing Newark residents’ economic opportunities.”

The city’s move on Uber has been largely supported by the traditional taxi services. 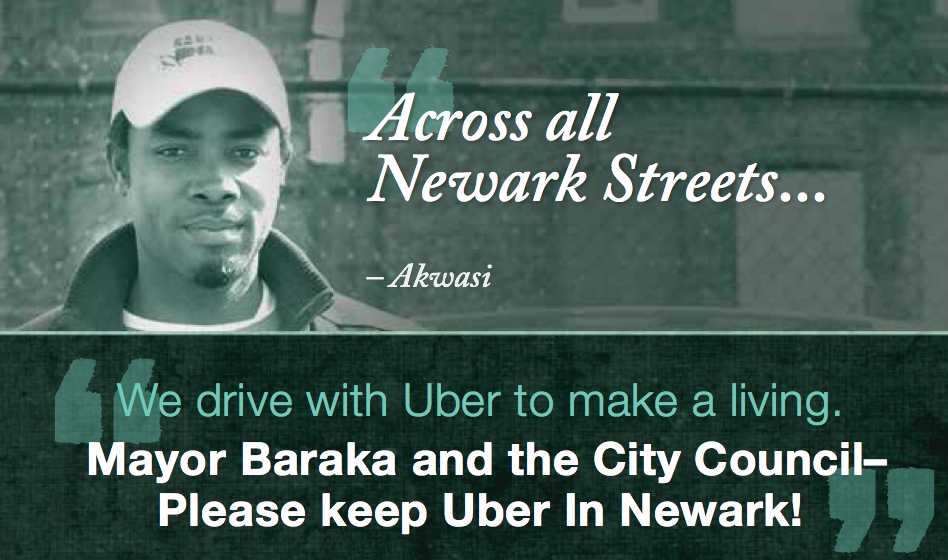