The title says ‘unbreakable’ but is anyone really unbreakable? Well, so far the concept seems to be holding true for at least one person, and her name is Kimmy Schmidt.

The title character of the series, despite being held in a bunker by a deranged wannabe cult leader for over a decade (yes, this is a comedy), has remained so optimistic about life that she’s thriving as a new New Yorker, discovering the city, new opportunities and herself in the process.  Although Kimmy is most certainly an adult, it’s her newborn-like tendencies that make her, and her merry band of neurotic friends, so much fun to watch.

The series seems to be unbreakable as well, as viewers and critics alike flocked to it. In its first season, Kimmy was nominated for a slew of awards. Including seven Emmy awards, one of which was Best Comedy Series.

As the second season gets underway, a quick analysis of why people seem so drawn to Kimmy is in order. Giving an answer that seems more realistic than laugh out loud funny, Executive Producer Robert Carlock says, “I think everyone has had something they wish hadn’t happened to them; the things they wish they could do, the missed opportunities or ways they wish they’d better spent their time.  There are a lot of ways that people find themselves in their own prisons and what everyone really wants is to be a better person. When we approach a story or a character we always have that in mind. There is something human at the core of the stories that we’re telling and I think that’s what makes the series so relatable.“

With lead character Kimmy so happy all the time, Carlock and his crew do worry that some might consider her constant optimism annoying. “ We do try to always keep an eye on that and make sure that we modulate accordingly,” says Carlock with a slight laugh. “But we don’t ever want her to lose that trait so we just make sure that she’s acting in ways that are in keeping with her character. In fact, that’s one of the things that we focus on this season – Kimmy grappling with the question, ‘how do I stay me within this crazy world?’ It’s about the moral gray areas that you run into in life, the disappointments that are sort of inevitable but yet surprising, and things like that. Hopefully, we’ve found a balance between Kimmy’s optimism and a level of realism that people will accept.”

For those not in the know, the series was originally developed by NBC, but at the last minute, the powers that be passed and Netflix pounced on the property.  Carlock says that the switch was for the best, explaining, “We definitely ended up in the right place because this is a show that requires more than just one episode to tell you what’s happening.  I think that if we’d just aired the pilot on NBC it might not have gained the audience it has now. It’s different in that people are able to get the complete narrative rather than for us having to hope that they’re understanding the tone and the subtleties when they come back each week. So, in the end, it all worked out well.”

Carlock does admit that there are some things about the Netflix model that he’s still getting used to. ”It’s still new to me that people can watch some of it or watch all of it right away, kind of like a book  — you can read one chapter, a few chapters or the whole thing at one time.”

He mentions that another aspect that’s new to him is that because the whole season is complete, there’s no opportunity to gauge public reaction to what’s happening and make revisions along the way. “There this added pressure because we’re saying, ‘here you go, here’s, the whole thing.’ There’s no opportunity to course correct. We’ve finished it and wrapped all up in a big package and we can’t unwrap it to any change anything. That’s a little scary.”

The Netflix model also offers some freedoms that the network model does not, but it’s important to be judicious about how to use that, says Carlock. “People really liked what we did in the first season so we wanted to stay true to that moving forward. What that means is we didn’t want to be tempted to just do things because we could on Netflix. We’ve set a tone with our heroine and she isn’t someone who’s going to be taking her clothes off and swearing a lot. That doesn’t make sense for us.”

The lack of commercial breaks in the streaming service called for some decision-making in the writing process as well, explains Carlock. “We decided that we would continue to think about act breaks in the way that we wrote our stories because even though we don’t have those commercial breaks we liked the way the action rises and falls if you metaphorically place breaks in it. If you think about it, every form of storytelling has built in breaks; books have chapters, plays have intermissions and things like that. There’s a reason for that in that it creates an ebb and flow within the story and consciously creating that rhythm makes for a very pleasing episode.”

Another small change that the creatives liked involved crafting the ending of each episode, says Carlock. “We like not having to put a button on the end of each one and that really serves the Netflix model because we want people to roll right into the next one. We didn’t break any molds by doing that but it felt new for us.”

Revealing a bit more about the writing process, Carlock says, “We did write a lot before we started production. We knew the arc of the season and used that as a blueprint. But, our writers are big believers in the rewrite process and in learning things from the cast table read. So what we do is we do big rewrites after the first draft and after table reads. Then we may make some changes as we’re shooting. We just keep trying to make it better and better and the truth is we really don’t believe that things are finished until we’ve actually shot and edited them.”

Talking about what’s happening in season two, Carlock says, “One thing that remains an intentional mystery is Kimmy’s life before her abduction and her family. In season one, we met some relatives that she even didn’t know she had. That was all by design and we’ll continue to explore that this season. Also, Tina Fey steps in as a therapist who Kimmy happens to come under the guidance of. But this woman has some problems of her own and that makes for some very funny moments. That’s a lot of stuff about Kimmy but I just want to say that the season ends for all four of our main characters – Kimmy, Titus, Jacqueline, and Lillian — in a really promising place for season three.”

Speaking of season three, Carlock says that the writing for it hasn’t commenced as yet, but thoughts are swirling among the creative staff. “There are some ideas that we’re excited about and pretty soon we’ll start figuring out it all out.” He laughs a little as he then says, “Can’t we just enjoy season two for a second? We worked really hard on it and we’re really excited to share it with everyone. Let us do that for just a little bit and then I promise that we’ll jump right in and start getting things together for season three.”

This seems like a fairly reasonable request, especially when Carlock adds, “Our goal for these episodes, and really for the whole series, is to tell a relatable story and just make it as funny as possible. We had so much fun packing in as many jokes as we could in just every way that we could find. I’m really hoping that everyone loves what we’ve done as much as we do and that they laugh a lot when they’re watching. I mean, seriously, who doesn’t need a good laugh at the craziness of it all sometimes? That’s where Kimmy comes in – she’ll make you laugh at the absurdity of life and everyone needs a friend who does that, right? If you’re not laughing, things can just seem unbearable at times. If it’s ‘unbearable’ versus ‘unbreakable,’ and I think we can all agree that unbreakable should always win out in that fight. So go ahead and get some ‘Unbreakable Kimmy’ in your life. Maybe she’ll make you feel unbreakable, but if nothing else, she’ll definitely make you laugh.”

Season 2 of Unbreakable Kimmy Schmidt is available for streaming via Netflix on Friday, April 15th. 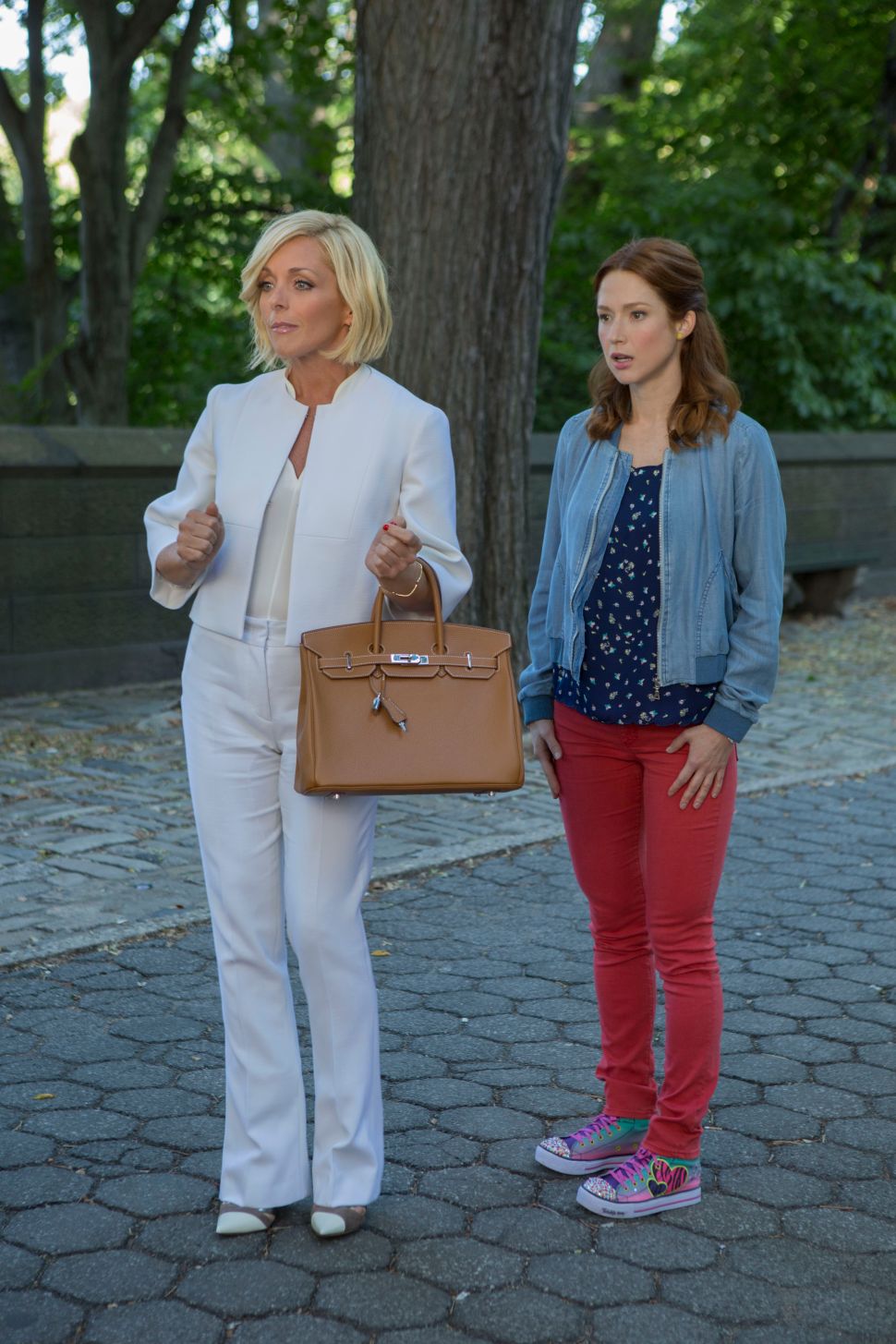