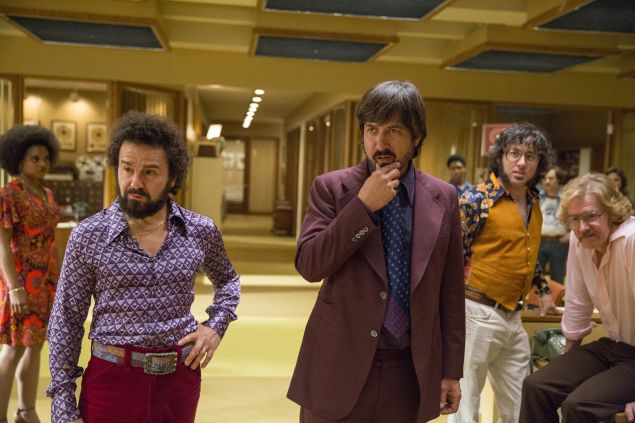 It’s telling that the two scenes from “E.A.B” that managed to reach the feeling of exhilaration hinted at by earlier, more promising episodes had two things in common. 1) They both involved a lesson in the ways music can kick your ass with how simplistically awesome it can be, and 2) Neither involved Richie Finestra.

The first sees Lester giving the Nasty Bits a lesson on the foundations of rock and roll–a bit that would’ve gone super viral in the Youtube age–as the brash faux-punkers look on in understandable awe at the power of the E-A-B chord progression. The second is the episode-ender in which Clark–who bonds with his coworker Jorge the way we all do, over cocaine– walks into a basement party as Barrabas’ “Jungle Safari” moves the bodies around him. The look on his face says it all. He’s entered more than just a wild party. This sheltered motherf*cker just stepped into a new world.

And it’s these moments where the audience feels like the Nasty Bits, or like Clark; mouths open and thinking “Oh shit, maybe Vinyl CAN be cooler than we thought.” But at the same time, the show seems to be working against itself. In hindsight, the decision to drop a big, fat Scorsese-by-the-numbers murder plot in the middle of the show is what continually drags the story into the mud. It’s a jarring transition to constantly jump between what the show should be–a look into the decadence and dysfunction that comes with creating art–and what it for some reason wants to be, aka 60 minutes of uninterrupted yelling. It’s a shame that for a series that promised all the sex, drugs, and fun of the 70s, Vinyl keeps turning into the guy at the party harshing everyone’s buzz.

The problem here, the reason it’s genuinely exhausting to find the energy to even care about Vinyl‘s crime plot, is that the series created such a colorful, entertaining supporting cast to surround such a genuinely unlikeable character. How do I care more about Zak Yankovitch signing a Bowie-to-be more than Richie committing actual murder?

That’s another thing–Vinyl refuses to accept that when it wants to be, it’s funny. Really funny. And, against all odds, subtly funny? Like the fact that when Zak meets Gary Glombetta for lunch, Zak orders a steak sandwich and chips and Gary sits in front of a watermelon and cheese…thing. It’s just a little detail, but it’s details like that which separates Richie’s blind search for “ROCK AND ROLL FEELINGS RARGH” and Zak’s courting of Gary, now known as Xavier. There’s a mixture of Zak having no clue what he’s doing and absolutely nailing it, played wonderfully by Ray Romano’s muppet face.

Of course, Vinyl does bombast well, supplied here in full by Andrea and American Century graphic designer Hal. Again, it’s small throwaway stuff (“Cakes are already in the shape of records!”), but also, that strangely incredible scene in which a recently-fired Hal shows up in the office, obliterated, to place a literal curse on American Century.

That…is kind of exactly what I want Vinyl to be. Every single time we move into the chaos of American Century’s offices–episode 4, “The Racket,” for example–the story finds a genuine heartbeat, something ironically missing from Richie’s cocaine-scapades. It’s okay to be Mad Men on speed. Television NEEDS a Mad Men on speed.

I think I might join the fun
But I had to hit and run
See I just can’t settle down
In a kinky part of town
-Bob Marley & The Wailers, “Kinky Reggae“

Over in the zero-fun zone: the Finestras, ladies and gentleman. Firstly we have Richie, the heavy rock who keeps dragging Vinyl, and us along with it, down into the dumps. Bobby Cannavale is great, great at what he does here, but the script itself needs to take Richie back roughly five notches. Maybe sticking him in jail is a first step, true, but does anyone believe he’ll be there for long? Looking back on the previous seven episode Richie, for all his fuckups, has come off as strangely untouchable.

And it’s moments like this, with Richie caught dead to rights admitting to both murder and a cover-up, where Vinyl has the opportunity to have some damn fun. Richie shouldn’t get off, easily or otherwise. American Century has been presented as a company desperately in need of an image change, something less archaic and more capital R’s Rock and Roll. What about a CEO in jail?

A sadder case of the nothings is Devon Finestra, now living at the Chelsea Hotel and (unsuccessfully) stopping her children from throwing cats down stairwells. It’s a legitimate miracle that any story can put both Bob Marley and John Lennon into the same scene and still have it feel inconsequential. But here we are, and here is Devon, finagling her way into a photo with John Lennon and his mistress May Pang, for the benefit of a photographer she just met.

I’m hopeful at the first sign of Vinyl giving Devon, and Olivia Wilde, something to actually do with her time. After all, photography was her love before becoming trapped the Finestra mud pits. But Vinyl‘s writers seem intent on writing Devon that strange way they write Richie. People are in awe of them, but we’re not sure why. For Richie, this usually leads to him suffering zero consequences for his increasingly shitty actions. For Devon, it means acting as a weird hybrid of muse and stepping stone; inspiration for less talented men to reach more lofty heights.

Vinyl obviously KNOWS how to have fun, but obviously wants its #prestige drama, too. Let it go, Vinyl. If “E.A.B” taught us anything, it’s that it’s better to be at the party with the mailroom staff than sitting in a jail cell with the big shots. 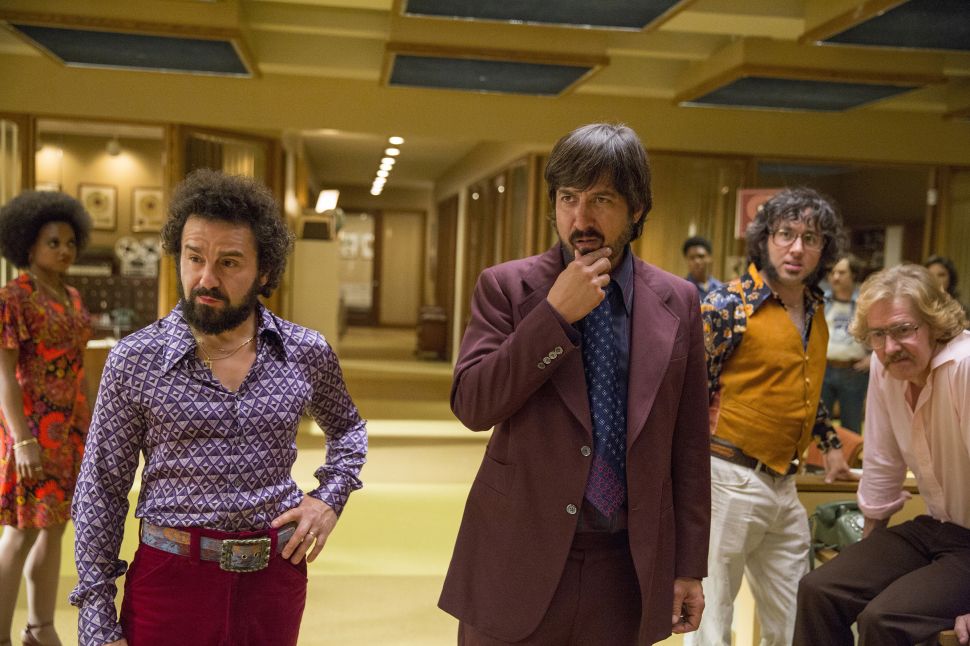