How appropriate that Vinyl‘s first season closed with a mess. A loud, raucous mess with Richie Finestra dead-center, looking on at the mayhem he started. I think the thesis offered by Martin Scorsese, Mick Jagger, and Terence Winter’s first Vinyl go-around is encapsulated in that final scene, in which American Century’s employees went at their office like a coke-crazed Banksy. At the end of the day despite mobsters, murder, and more drugs than the human body can take it was music that saved the day. And not even good music–because let’s face it the Nasty Bits’ “best” song would be like, the worst track on Green Day’s Dookie–but music that makes you feel something, Music that makes you say life is fucked. Let’s dance and break a few tables.

And then there’s Zak Yankovitch in the corner. Zak who, at this point, knows all of Richie’s dirty laundry. Zak who, with one withering sad-Muppet look at Richie, reminds us that even the records that change our lives every time they spin eventually come to an end.

Yes I’m starting to sweat
You know my shirt’s all wet
What a feeling
MC5, “Kick Out The Jams“

The reason, I think, “Alibi” ultimately failed as not only a finale but just as an episode of television is that every narrative stake, story obstacle, and emotional throughline amounted to a big wet fart noise in the form of the Nasty Bits’ show-opening performance. Did Mick Jagger demand a clause that stated nothing actually bad can happen to the character played by his son?

The episode-long tease that the band would implode because of Juno Temple’s Jamie Vine? Nope, there will plenty of girls to have sex with, ya dinguses, now get out there and play. The chance that minutes before the biggest performance of his life, Kip Stevens would succumb to the heroin addiction introduced all the way back in episode one? Once again, nope. Like most of Vinyl‘s dilemmas, Kip’s drug problem was simply solved with MORE drugs.

But what about the chance that the raucous, unruly New York Dolls crowd might not even like The Nasty Bits? Come on. Have you been paying attention? Thanks to three-quarters of a 2005 pop-punk song the Bits win over the entire crowd. Hell, they win over the Dolls themselves. Fuck it, if you look closely you see punk pioneers The Ramones themselves looking on thinking “man, we need to get off our asses and play like these guys.”

That, even for Vinyl, was ridiculous. Throw in Richie calling the police to break up the performance not even one song in, and the only thing that’s making sense here is that the charge was “public indecency.”

This issue with the Bits is indicative of the finale’s problems as a whole. It stunk of a group of creators who, despite early, early season two renewal, didn’t quite trust the story they themselves built over ten episodes (that CBGB reference was like, Gotham level silly). Even Richie’s impassioned speech to his staff, although dutifully delivered by Bobby Cannavale as always, seemed unclear on what it needed to be, and what it wanted the audience to believe. “An alibi is an excuse for bad behavior,” he says. “Well, I ain’t making any more excuses.” Then…why are you naming the label Alibi?

It’s strange. “Alibi” felt like one of those season finales written by staff unsure of a show’s future, even though HBO confirmed long ago it wasn’t. Ironically, episode writer Terence Winter actually IS the only one who won’t be back for season two. If only Vinyl itself had given us a twist as interesting or as bittersweet.

When I was young it came to me
And I could see the sun breakin’
Lucy was high and so was I dazzling
Holding the world inside
Queen, “The Night Comes Down“

It’s hard to describe how pleasantly surprising it is that Clark and his mailroom partner Jorge’s subplot is Vinyl‘s strongest story, considering Clark was such a nothing for seven or so episodes. And maybe that’s the point; that the overblown (Richie) and the desperate (Jaime) can bloviate all they want, but it’s the people at the bottom who get music in its purest form. It helps a lot that the song Clark is peddling is just a fucking legit-as-hell toe-tapper, man.

I pointed to the final scene at American Century as Vinyl’s exclamation point, but that sweet montage of Indigo worming its way on to DJ turntables and dancefloors across the city is what it should have been all along, and hopefully can be in season two. Vinyl wants so badly to be a track that makes you yell, scream, fuck fight and inhale–which is fine, in moderation, a word this series never learned–but it’s promising to see the glimpses where Winter and Co. remember that music is occasionally fun.

It’s a satisfying conclusion to Clark’s arc to see him saving the ass of American Century’s music executives by not dropping Indigo. Plus, Christian Navarro as Jorge notched Vinyl’s smoothest moment–including Hannibal literally impregnating an entire first row with charisma–with the way he answered the question “Who the fuck is Jorge?” Slide open a partition, reveal glorious afro: “I am.“

I walk along the street of sorrow
The boulevard of broken dreams
Where Gigolo and Gigolette
Can take a kiss without regret
and so forget their broken dreams.
Tony Bennet, “The Boulevard of Broken Dreams“

Looking ahead, what can HBO do to keep this Vinyl from skipping so often and glaringly? For one–Devon Finestra. What a shame a show has an actress the quality of Olivia Wilde and doesn’t even mention her character in the finale. It’s not that Devon can’t be a troubled housewife, impassioned artist, and occasional foil to Richie all at once; just don’t have her do it in the background.

More than anything, though, keep it about the music. You may notice I didn’t discuss the crime angle with Corrado Galasso, Zak, and the death of Joe Corso because…what is there to say? It’s such paint-by-the-numbers tough guy bullshit, mixed in with throw-your-hands-up absurdity (would the FBI really act so immediately and carelessly based on so little information?).

The worst part is that Vinyl doesn’t need it. The series is like The Nasty Bits pre-Alex the guitarist: tons of passion, a handful of talent, and one glaring limp player dragging the rest down. It’s funny how much time Richie spent this season telling, well, anyone who would listen how it’s all about the music, maaaan because honestly, it should be. Any scene involving the FBI, or interrogations, or Goodfellas-lite backroom meetings just feels…empty. But the high we get from a simple dance song, a stylistically filmed performance, the occasional familiar face of a dead legend, and even a guitar chord, sloppily played? 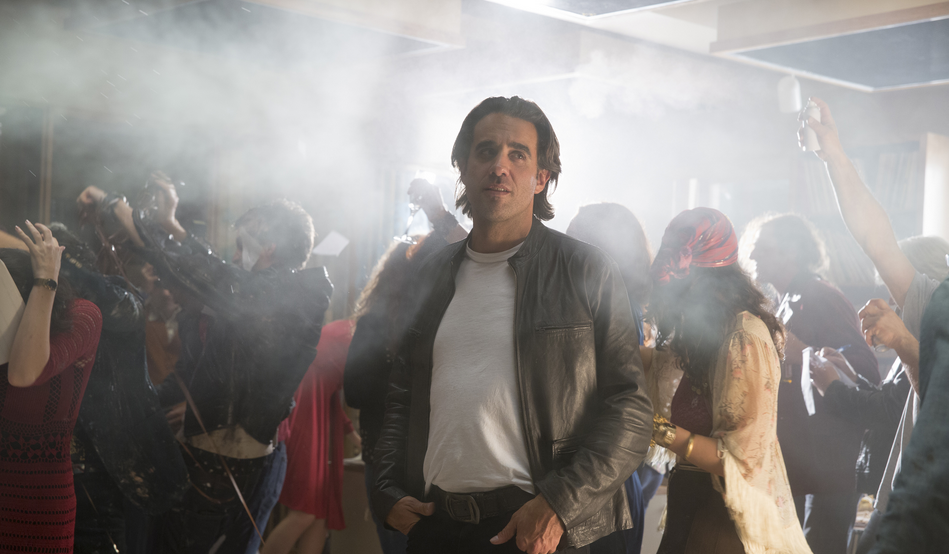