A visual representation of a worm hole in the film Interstellar. (Credit: Paramount)

An Oscar-winning composer, a critically-acclaimed visual effects artist, and the world’s top theoretical physicist walk into a bar…

Well actually, it was a restaurant and it was late last year in London’s West End.

On Saturday night, almost four months later, these men who sit comfortably at the top of their fields, joined forces at the Walt Disney Theatre in Orlando, Florida to share the result of that dinner; The Warped Side of the Universe. An event that showcases not only their extraordinary individual talents, but the trio’s passion for science and storytelling.

The collaboration is a reunion for Zimmer, Franklin and Thorne who were responsible for the score, special effects and science that made Interstellar so unique and beloved by so many. The film earned Franklin his second Academy Award and a ninth nomination for Zimmer. Thorne’s The Science of Interstellar became a bestseller.

The show’s opener immediately brings you back to Nolan’s story of an astronaut who must leave his children behind to find a habitable planet where humanity can resettle. The curtains raise to Hans Zimmer conducting a slightly altered version of the film’s most recognizable score to set the tone for the rest of the evening.

Front and center of the stage sat Zimmer in arms reach of a piano and synth. Both of which he made ample use of during the two hour show. Three violinists, a cellist and another synth player stood to his right. To his left was another violinist as well as Michael Einziger, the guitarist and songwriter for the band Incubus. (Einziger studied the history of science at Harvard University. His role in the show was significant and his talent more than apparent.)

While Zimmer performed in the first minutes of Warped Side of the Universe, visual effects designed by Paul Franklin and his London-based VFX company Double Negative were projected on a screen above the stage. They called this opening multimedia piece “Blue Dot”—a reference to the famous photograph of Earth taken by the Voyager 1 spacecraft as it began its journey out of the Solar System and into interstellar space. The photo was taken upon request by astronomer Carl Sagan.

The reference was fitting. Following “Blue Dot” and a brief introduction from Paul Franklin, was a lecture on the startling discovery of gravitational waves given by the man who pioneers a significant amount of the related research, Kip Thorne. Besides being a renowned theoretical physicist and the world’s leading expert on Einstein’s General Theory of Relativity, he’s also known for being an excellent science communicator—a talent he shares with the late Carl Sagan.

Thorne’s presentation was an excellent and easy-to-swallow crash course in black holes and gravity. The audience became an augmented version of his class at Caltech. Besides being free of course.Thorne peppered his lecture with jokes, historical anecdotes and even a well-received Star Wars reference.

Kip Thorne’s tale of how gravitational waves were recently discovered and how they open a new window to the universe is engrossing and perfectly complemented by Paul Franklin’s striking visuals. Amazingly, the seemingly abstract representations of colliding black holes and celestial events we see throughout the show are based on Thorne’s hard data. This method was also utilized for Interstellar.

With the audience now primed with fascinating science, Hans Zimmer returns to the stage to close out the evening but makes a simple request: “Do not watch me and the other performers” he said. “Please watch the screen and make it your own” referring to Franklin’s projections. Zimmer explained that they designed the show so that you’ll take your own journey and come away with your own interpretation of the more abstract ideas and images. 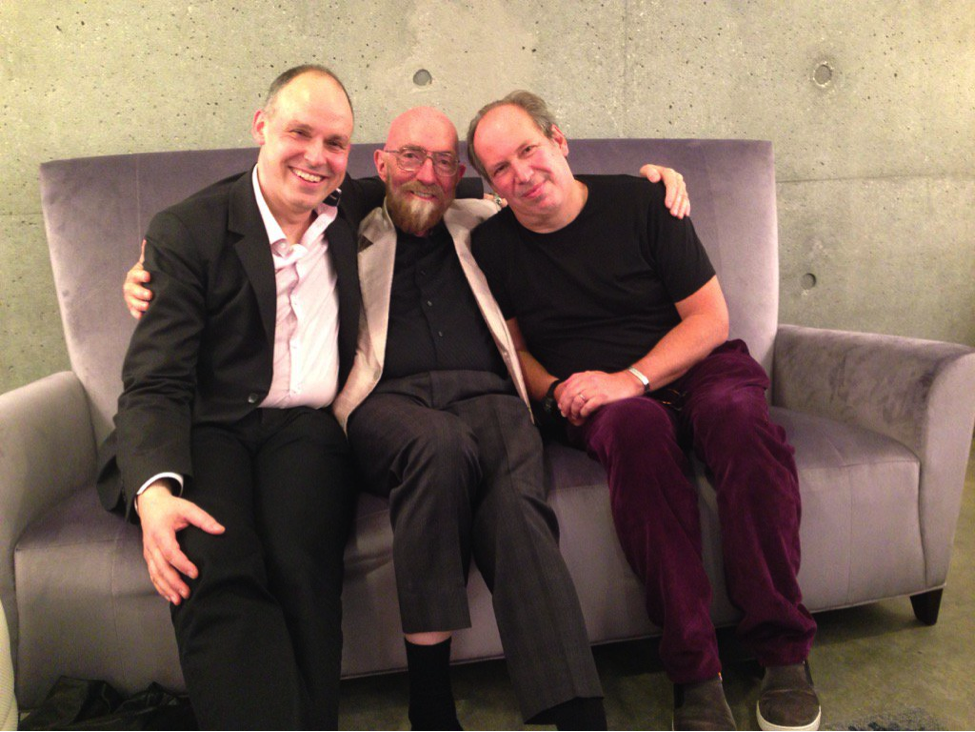 The visuals evolved from familiar celestial objects to a feast of eye-popping kinetic art as Zimmer went from the Interstellar score to a few original pieces.

At times, the concept of what we are seeing having some basis in reality seemed to be replaced with more interpretive representations. Paul Franklin is known for his streamlined, realistic approach to VFX—a style he developed with long-time collaborator Christopher Nolan—but he was actually a sculptor early in his career as an artist. Franklin’s first Oscar win was for the critically-acclaimed Inception and the film also earned Nolan nominations for Best Picture and Best Director.

The visual work done by Franklin and Double Negative for Warped Side of the Universe is not what you would expect given his career. It’s far from dressed up and sometimes even a bit raw. Watching two bright but pixelated black holes dance around each other before one swallows the other was captivating because of the effort that went into the multimedia experience. You are listening, watching and even thinking. Total sensory overload.

The show was designed for Kip Thorne to convince you that something incredible exists out there in the universe, for Hans Zimmer to transport you to these incredible places and for Paul Franklin to immersed you in them.

As Warped Side of the Universe came to a close, there was a standing ovation for Zimmer who was then joined by his fellow visionaries. They thanked a range of people involved with the project and most notably, Christopher Nolan for letting them incorporate his film so prominently in their performances.

It’s obvious through their communication with audience and even with each other that working on Interstellar really stayed with each of these men and has had a profound effect on their lives. They wanted to share that transformative effect with the audience and there’s no doubt that many left the theater that night with a new perspective on the universe.

Filed Under: Movies, Oscars, interstellar, Hans Zimmer, The Warped Side of the Universe