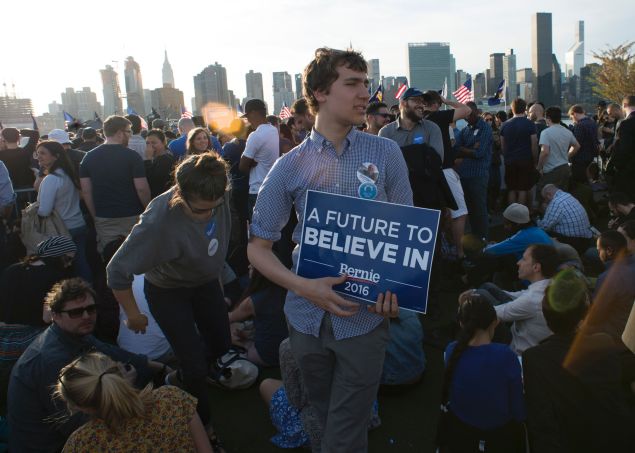 A crowd awaits Bernie Sanders’ arrival at a campaign rally in New York on April 18. Photo by Don Emmert/AFP/Getty Images

In most presidential elections over the last 40 years, the seamy underbelly of the Democratic and Republican nominating processes never came into public view. The changes made to those processes since the 1970s have generally led to clear front-runners taking early leads and never looking back, as their opponents, deprived of fund-raising capability as they fell behind, dropped out one by one—leaving clear winners on both sides to fight through to November.

But this year, protracted contests in both parties have exposed the opaque, complex and often highly undemocratic rules by which presidential nominations are awarded. Americans, who have been raised to take it as a given that the candidate with the most votes wins, have begun to realize this is not necessarily true. It is a realization that could explode both parties and create a realignment not seen in U.S. politics for generations.

On the Republican side, Donald Trump has been the clear front-runner throughout the nominating process. But with each passing day, it becomes clearer and clearer that his opponents and the GOP establishment will use every procedural maneuver on the books to deprive him of the nomination, if at all possible. While The Party Crasher does not support Mr. Trump’s candidacy, honesty compels the admission that the rules, such as they are, work to his disadvantage, and while this is not the same thing as being cheated or robbed, it is fundamentally undemocratic. The rules are, in fact, extremely complex and fundamentally undemocratic. Voters across the country are learning that the votes they cast in their state primaries or caucuses are really just an opening bid, which the delegates, chosen at a later time, in district or state conventions, do not necessarily have to honor. In Colorado, Mr. Trump came out of the process with none of the 34 delegates selected at the convention, a fact that does not reflect the front-runner’s support in the state. In Georgia, it is estimated Mr. Trump will receive only 12 to 14 of the 42 district delegates, despite placing first in the state’s primary.

On the Democratic side, while Bernie Sanders truly is losing—by every measurement possible, including actual votes cast, delegates elected and number of states won—it is the appearance of impropriety in the process that continues to dog front-runner Hillary Clinton and the Democratic Party itself. The chief complaint raised by many Sanders supporters pertains to the superdelegate format, because a majority of the more than 700 superdelegates—party stalwarts who are free to support any candidate—have declared support for Ms. Clinton. It is a mathematical fact that she would be winning even without all those superdelegates, but the race would be much closer. Also of concern to Sanders supporters is the odd nature of the process in some caucus states, such as Iowa and Nevada, where state Democratic parties do not publish actual votes but rather “delegate equivalents,” a complex tally whose origin is understood by virtually nobody aside from Democratic insiders. Sanders backers have used these weird wrinkles to suggest that their candidate was robbed in those two states—that the state Democratic parties, in effect, hid the actual vote totals to award a victory to Ms. Clinton. In other states, such as New Hampshire and Wyoming, supporters of the Vermont socialist were flummoxed or simply furious after seeing their candidate win these states decisively, only to come out of the process with half the delegates, or even fewer than that, due to arcane rules and/or superdelegate pledges. 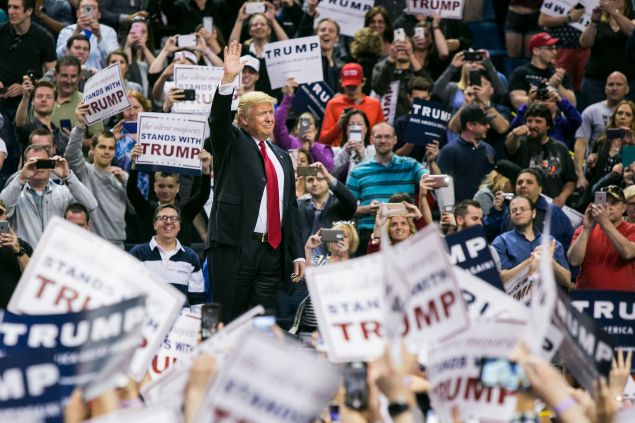 Donald Trump waves to the crowd as he enters a rally in Buffalo, N.Y. Photo by Al Drago/CQ Roll Call

It is important to note that nothing is happening in either party that is against the rules, but the rules themselves stink to high heaven. They allow a clever operator—such as Mr. Trump’s chief rival, Ted Cruz—to come in after voters have made their choices and lay claim to more delegates than he or she earned among the actual vote tally. Even Mr. Sanders has benefitted from this arrangement: Following a close loss in Nevada’s precinct caucuses, the Sanders campaign turned defeat into what seems like a victory by picking up extra delegates at the convention in Clark County, home to populous Las Vegas and more than half the state’s Democrats. (The final outcome will be determined at the Nevada Democratic Party convention in May.) This convoluted and arcane process, which the majority of the general public does not understand, has given rise to an understandable belief among Trump and Sanders backers that their candidates are being robbed by their respective parties. When people do not understand the process, and when that process is fundamentally unclear and, at least in Mr. Trump’s case, often completely at odds with what voters decided at the polls, it should not be surprising that people become suspicious.

It has been clear for some time that Mr. Sanders is not going to be the Democratic nominee unless an epic calamity destroys Ms. Clinton’s campaign; but that does not change the fact that many of the Vermonter’s supporters believe he never had a fair shot. Similarly, Trump supporters are also coming to the conclusion that their man isn’t getting a fair shake, and it is difficult to disagree. If he does not win the nomination at the GOP convention in Cleveland, his supporters are likely to be as disenchanted with the Republican Party as Sanders voters are with the Democratic Party. While it is impossible to see the future, it is not hard to envision upwards of 40 percent of the base of each party walking away from their convention disgusted and feeling like they were robbed. If significant numbers of those disenchanted voters stay home on Election Day or vote for third-party candidates, the results of the November elections could be completely unpredictable—and the future perhaps even less certain. Should a groundswell of people decide they’ve had it with the two major parties, these voters could absolutely provide viable bases for the formation of new political parties that will far exceed the influence of existing third parties, such as the Libertarians or the Greens.

It should be clear to anybody who has even a passing interest in U.S. politics that American voters are fed up with the status quo. In the past, Mr. Trump and Mr. Sanders would have been dismissed very quickly as sideshow acts. But their strong performances to date provide ample evidence that the public has lost faith in the existing parties and existing institutions. Couple their supporters with the mass of people who don’t bother to vote, and it is obvious that the majority of the public isn’t buying what either party is selling. Americans think the fix is in, and the opaque, convoluted rules that govern both parties’ nominating procedures are taken as damning proof.

How many people, sitting around a table on game night, would agree to keep playing a game if the rules were so complex that the same people always won and nobody else could even compete? If the Democratic and Republican parties do not institute a more clear, more straightforward, more transparent process in coming elections, then both parties are headed for a day of reckoning. In fact, that day may already be upon us. The Democratic Party is 188 years old; the Republican Party is 162 years old; both are showing their age. If they don’t adapt to the public’s expectations, they’ll both fade away, just as the Whigs and the Federalists did before them.

Cliston Brown is a communications executive and political analyst in the San Francisco Bay Area who previously served as director of communications to a longtime Democratic member of the U.S. House of Representatives in Washington, D.C. Follow him on Facebook, at facebook.com/ClistonBrownPolitics, or on Twitter, at @ClistonBrown. Visit his website at ClistonBrown.com. 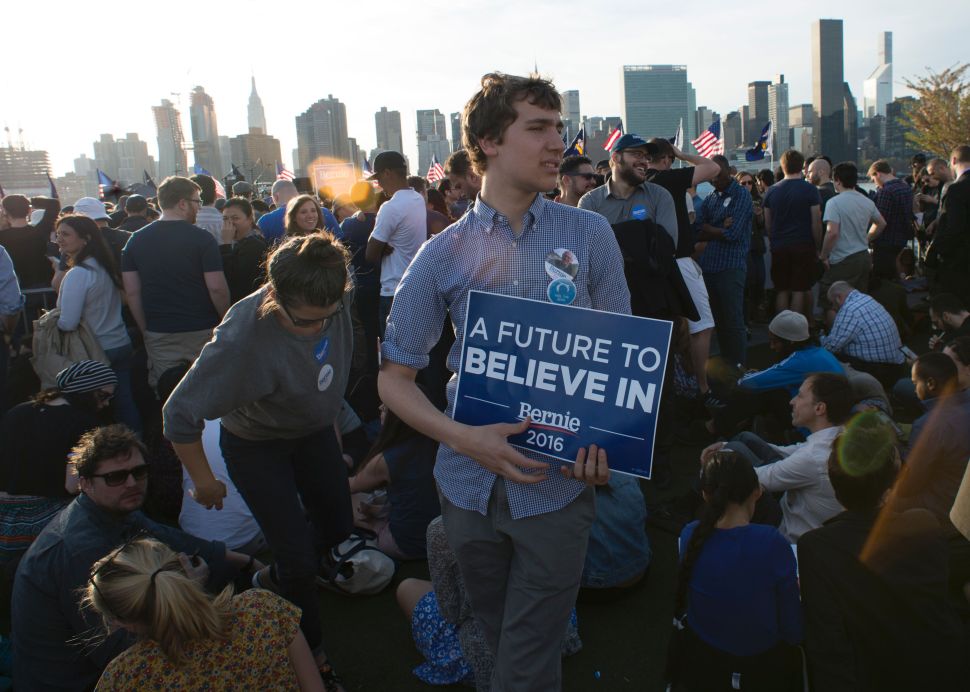