I press the CALL button again, and from the intercom, a woman’s lackadaisical voice apologizes for the already-45-minute delay at 1 a.m. It’s busy. Lots of people are stranded between floors.

My mother is somewhere outside the jammed door on higher ground, my father keeps a lookout for the repair man on the street, and my iPhone battery is in the red.

My mother is still there.

“Are you sitting or standing?”

“Leaning against a wall.” She yawns.

There is a point where waiting succumbs to surrender and patience prevails. I’m not there yet. Fuck, I’m stuck with myself.

I scale the place. Worse comes to worst I can step on the hand rail, shimmy out of the ceiling hatchet and climb up the cable to the next floor—real action hero stuff.

Instead, I complain, “I’m soooo thirsty.”

“I think you’ll make it,” my mother says. “It’s not the Sahara desert.”

Over the last few weeks, I have been lambasted by unanticipated turns of events. I had a shady run-in with my ex, Jerry, and my man-free proclamation until summer was a bust. Spring happened, and I met someone new.

My denouement with Jerry came about at a mutual friend’s birthday dinner. Jerry called me beforehand to tell me I was important to him and that my ass was getting better.

When I scoffed, he said, “What, you’re so perfect there’s no room for improvement?”

He warned me he was bringing a girl to the dinner—just a friend. She was too young for him anyway, but it’s not like he hadn’t thought about it.

I showed up at Omar’s a fool, and the first thing some dinner guest said was, “Didn’t I meet you last week with Jerry in Miami?”

I wasn’t sure if Jerry brought his friend along to hurt me or because he just didn’t care, nor did I know which was worse. I couldn’t sleep that night—I felt him all over me.

“Wrong blonde,” I told him.

Jerry came in soon after toting a brunette. She had a pretty face, a slight double chin in that sweet, young way. She seemed gentle and unsuspecting, kind of flailing around to find her place in life. I pitied her but didn’t much acknowledge her either.

He sat the two of us next to him so we could fight for his affection. I felt a full-bodied hatred that took my breath away. I said, “I’ll be right back,” and sat at the far end of the table, ignoring him for rest of the night. When I left early, he shouted out across the room, “Bye, Jazzy!”

I wasn’t sure if Jerry brought his friend along to hurt me or because he just didn’t care, nor did I know which was worse. I couldn’t sleep that night—I felt him all over me. It was so bad: I imagined cutting myself open, washing him out and stitching myself back up.

My tailbone hurts. I stretch and shake out my body.

“You really don’t have to stay. It’s highly unlikely I’ll fall down the elevator shaft and die.”

I turn to my dying phone. As of late, I’ve been Googling the simplest of words. It seems the wiser I get the less I know. Change. “To become something else; a new or refreshingly different experience. As in ‘couscous makes an interesting change from rice.’ ”

Several days after I surgically removed Jerry from my infected body, I met Mason. It was a set up at Claudettes. He had seen my picture on Facebook and tracked me down through mutual friends. I bitched because who would have thought we’d end up having this thing where we just stare at each other and smile.

Mason is a couple years younger than me. I’m so used to dating older men that this feels different—kind of like hope.

“Do you have any vices?” Mason asked.

Of course, I’m scared. Part of me wants to run away, to shut it down so that I don’t have to feel anything new or uncomfortable like anxiety or rejection, but then again we do laugh.

I told him a terrible joke I made up over dinner. I used my immediate surroundings for inspiration.

“Where do people who eat on fancy plates come from?”

I had him in stitches.

I Google expectation. “A feeling or belief about how successful or good someone or something will be. As in ‘a result that did not live up to expectations.’ ”

The first time we were in bed together, I kissed his hair, which hair smelled like berries, shampoo from the gym.

“What’s it like to be so beautiful?” he asked.

I deflected, “It’s not like I walk around with a mirror in front of my face.”

“I guess I’ll just have to keep telling you so you’ll never forget it.”

I doubted I could ever live up to his image of me. I said, “You’re too early. I’ve been waiting for August.”

“Isn’t that how it happens though?”

I gave in because it felt so good. He was calm and gentle. I was like a pool of that he strung his fingers upon, making innocent shapes. I thought even with all the suffering, in that moment, it was worth it to be human.

“The same is a bore. I like a challenge.” He grabbed my hair. “And you like to be in control.”

“No,” I said pushing his other hand away from between my legs.

I gave in because it felt so good. He was calm and gentle. I was like a pool of that he strung his fingers upon, making innocent shapes. I thought even with all the suffering, in that moment, it was worth it to be human. Then he grabbed my body so tight and I grabbed him back so tight that we didn’t know what overcame us.

Sure, I took a few time outs to organize my thoughts and control the air around me, but then he’d place his hand back and off we’d go again. I could barely remember what he looked like, but breathing him in, I knew life didn’t have to be the same. It didn’t have to always end up with me alone under my covers dreaming of another day. It sometimes could be that day.

Our nascent romance is not without its uncertainties. Mason’s a distracted texter. He puts aside his phone mid-conversation, and the rest is history. Communication is my kryptonite, so waiting on words can be disconcerting.

I often look at couples walking down the street and think you brave, brave souls. When I was in my 20s, I bopped around passing time with men like it was no big deal, but now I’m ready for the real thing. That’s a crazy amount at stake for five dates.

Just the other night, I jumped Mason on a dark street corner.

“Patience,” he teased, wrapping his arms around my waist and then kissing me back. “Patience.”

I’m upside down now, my legs resting against the elevator wall, and I don’t know what’s next or how much longer I’ll be in here. With the last of my battery life, I Google control. “To dominate, to command, to curb as in ‘to control a horse.’”

God fucking damn it. It’s been two hours of this hell. I break, let the reigns go and sob out what’s left of my fight. Within minutes, a loud noise and the hum of a motor, the elevator starts and the door opens.

I think of what my friend Ellie told me: “Sometimes you have to give up control to truly know yourself and grow.” The fear is that something new will hurt more, but the biggest danger by far is shutting out the world. As for Mason, it’s too early to know if he’s Mr. August but no matter—he’s drawn me out of my holed up heart, and for that I am grateful because now…I’m back in the game. 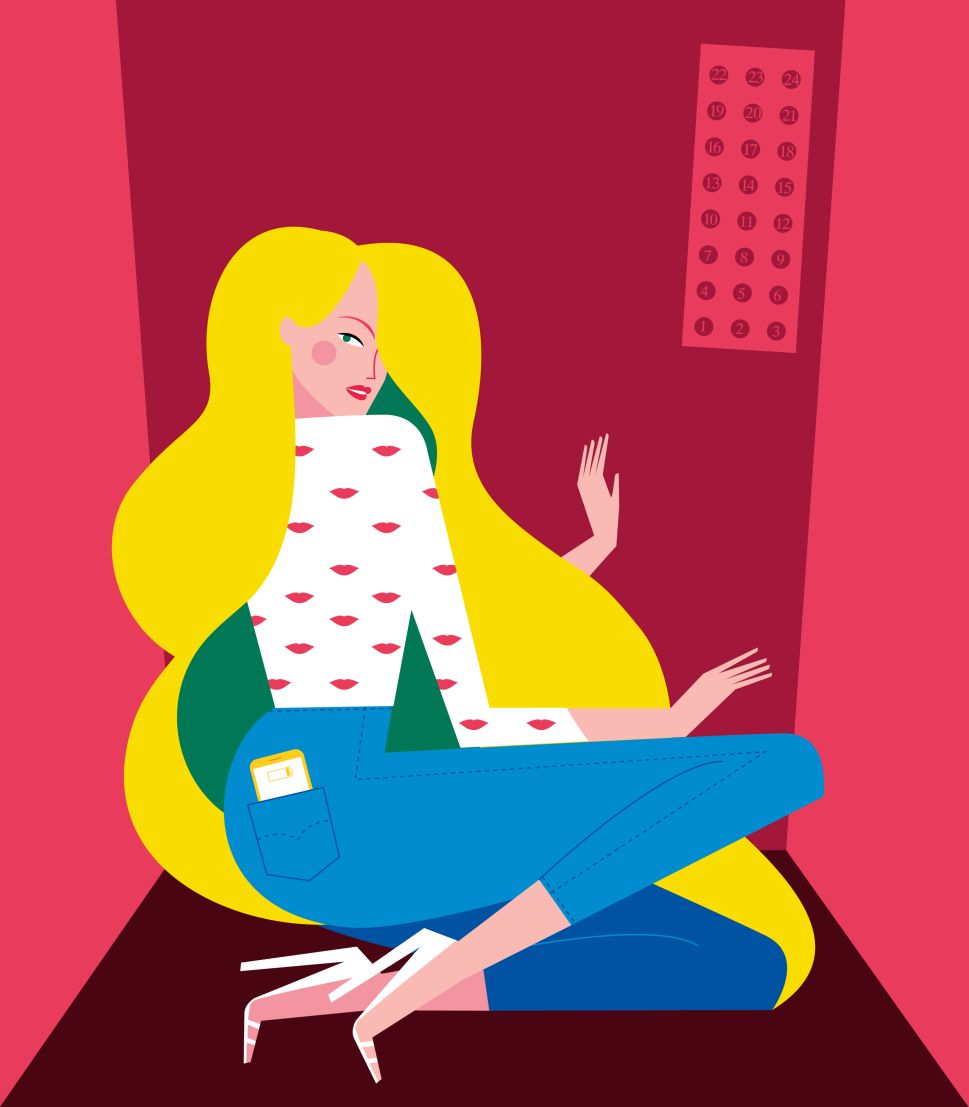