Yeah, I thought to myself on the subway from work. I’ve seen Real Housewives. You know, there’s Bethany…. and that other one. I must have seen it. It was on TV that one time at the gym, which I definitely, regularly go to.  I’ve seen it. Sometimes they’re sometimes in different cities?

I was on my way to go to a Real Housewives of New York City premiere party at 7:04 on a Tuesday and I just realized all I know about Real Housewives is that Disney Princess SNL sketch and commercials from when I was watching America’s Next Top Model marathons on Broadway.

“What do I wear?” I had asked my boyfriend the night before, mentally scrolling through my closet and trying to remember whether I owned anything with sequins.

“Something that can take a rosé splashed on it,” he answered.

I settled on a cap-sleeve black dress, one of the nicest things in my closet, something my mom bought me before my first Big Girl job while I was still in college. It was designer, flattering, and would hide wine stains of any vintage, self-inflicted or otherwise.

It was a restaurant around the corner from The Plaza, where tourists were taking pictures of themselves on the front steps. I pulled on a pair of sunglasses unnecessarily, half to trick the tourists into thinking that, even though I was wearing a designer dress paired with a backpack, I might actually be the type of person who’d belong socializing on 5th avenue.

The real feat would be tricking myself. The majority of clothes I own at any one time are in a rat-king pile that moves from my bed to my floor and back again, and on days when I’m too tired to blow-dry my hair after a shower (read: most days), it stay in a frizzy bun. Once, a few weeks ago, when I told my mother that I had a freelance piece at a fashion magazine, she laughed harder than I had ever heard her laugh at anything I’ve ever said, and I’m a comedy writer. It was a belly laugh so authentic that lasted so long that she texted me later to apologize.

In short, I have very little in common with women who pull of the tremendous feat of looking as flawless as physically possible on a daily basis, more-or-less as a job requirement. But there I was, strolling into Beautique like I’ve been there so often the maître d and I are on a first-name-kiss-each-other-on-the-cheek-twice-like-we’re-chic-and-French basis.

There was a collection of identical girls with clipboards, all about six inches taller than me, with perfect, Tumblr-post-ready eyebrows. None of them seemed to know exactly who anyone was or where I should be going. Even after I was ushered into a back room at the restaurant with the rest of the entertainment reporters, one of the wives’ managers kept asking for our names and what publication we were representing. “You’ll all get a chance to do interviews,” she reassured us.

We waited. We mingled. We introduced ourselves. Life&Style, OK!, People, Vox—down the line of writers, all pretending to have a bigger scoop about the Housewives than any of the others. In the center of the room was a tiny red carpet, only a few feet across, and a backdrop behind it about as wide. Arranged in a semi-circle before it, the names of photographers so they would all have a place to stand to take the celebrities’ pictures.

Sonja was hosting this party—the most dramatic of the ladies, I learned. And even though Season 8 hadn’t even premiered, there was already drama. Only two of the housewives would actually be at this party: Sonja and Ramona. The rival premiere party, where the other Housewives would be represented, was taking place in a couple of weeks. “Didn’t you read Page Six?” Vox chided People.

“Yeah, it was all over Page Six,” I said knowingly.

The chef of Beautique came out to have a few pictures snapped of him, but like an embarrassed girl at karaoke who needs a friend, he grabbed another middle-aged man and forced him to stand with him to take the photographs. There were a few more pairings of middle-aged men who had their pictures taken before they continued on, into the real party. “Oh my gosh,” one of them said, kissing another on the cheek. “Everyone is here.”

I had never been more confused by a statement. So far it seemed as though only a dozen reporters, and half of a barbecue’s worth of rich dads were here.

Where the reporters were stationed was something of an antechamber–reporters and photographers clustered together, forcing every glamorous party guest to weave through our backpack and microphone minefield in order to get into the next room.

And then, surrounded by a gaggle of tall-eyebrow girls, one of the Housewives arrived on the arm of a handsome young tuxedoed man. Something about seeing a middle-aged woman in person who looks so phenomenal you just know she spends hours doing Pilates brought me back to my middle school bat mitvah days.

…There was also the trope of the mother trying too hard, a woman who admittedly looked incredible, but visibly more incredible than whichever slightly chubby 13-year-old girl with braces and a terrible dress was becoming a woman. The Housewife getting her picture taken reminded me of That Mom.

At my big, mostly Jewish public high school, any given student was invited to an average of three bar mitvahs per weekend. The trends became obvious, the same moments repeating themselves over and over: the way-too-eager DJ; the camp friends all coming up to light a candle (with the DJ playing the FRIENDS theme song on their way up); the rubbery mozzarella sticks.  But there was also the trope of the mother trying too hard, a woman who admittedly looked incredible, but visibly more incredible than whichever slightly chubby 13-year-old girl with braces and a terrible dress was becoming a woman.

The Housewife getting her picture taken reminded me of That Mom.

“Do you know who she’s with? Vox asked me, referring to the younger man on her arm who, even wearing a tuxedo, looked as though he’d be most in place as an extra on a movie about Marines.

“Ugh, I heard that all the other girls get so annoyed with the way she always has a different, younger man as a date to everything,” I said back. It was something I vaguely remembered reading about one of the Housewives in an article on the subway over.  She seemed very interested, and wrote something down.

“Excuse me,” I whispered to one of the Clipboards. “Who’s the guy Sonja’s with?”

I turned back to Vox. “His name is Robert.”

She looks at me like I just asked who wrote Pride and Prejudice. “That’s RAMONA.” Whoops. There goes all of my goodwill. So much for my fantasy about us finding our scoop together. And then Sonja did come. It was immediately obvious. She and Ramona exuded the exact same confidence of someone who spent a day sweating in an expensive exercise class and then put on a good pair of Spanx. They were done-up with matching blowouts and tasteful, tight dresses. They made kissy faces at each other on the square patch in front of the cameras and, giggling, posed touching butts. They were like alumni visiting their old sorority house and really getting in the spirit.

“Show me that body,” one reporter with a camera said, and I was the only one who involuntarily made a face.

Like a Tom Stoppard play or a well-produced Rhianna song; their appearances was obviously constructed but so masterfully done that it exhausted me to look at.

Up close, the illusion of the Housewives’ perfect, made-up appearance was even more amazing. Not because the effect was natural­–quite the opposite: they wobbled in high heels, I could see fake lashes, and the streaks of highlighter on their chemically-tightened cheekbones. But they were amazing in their completeness. Like a Tom Stoppard play or a well-produced Rhianna song; their appearances was obviously constructed but so masterfully done that it exhausted me to look at.

Ramona smiled perfectly at the cameras too close to her face, one foot in front of the other at an angle like any “How To Pose On The Red Carpet!” listicle will tell you to. When OK! stuck a microphone at her mouth and asked her a question, she gave a few happy, optimistic sentences without hesitating.

When they fixed it, they asked the same question. Ramona gave the exact same answer. There was no humanizing moment, no breaking of the façade to smile at the reporter or roll her eyes or laugh. Just a perfect Stepford Real Housewife in a designer dress and very tall shoes and more makeup than I would know what to do with.

The antechamber became unbearably crowded, people shoving to try to ask Ramona or Sonja the same three questions over and over again and hear them give the exact same answer, and also would-be partygoers trying to actually make their way into the cocktail lounge party area. “Who are you?!” I wanted to scream at all of the guests. There was no consistent variable in terms of their age or gender. Some were older couples, some were groups of young girls. A few boys looked young enough to skill be in high school. “Why are you here?!?” I wanted to shout. “What Gossip Girl extras casting agency sent you?!?”

The actual party was worse. A darkened nightclub vibe, so crowded I couldn’t even see the bar, let alone get a complimentary glass of white. Luckily, the buffet table was empty, and I managed to fill a plate of gluten-free chicken and quinoa and squirm my way back into the antechamber, where reporters like me belonged.

Sonja and Ramona were gone. Lost in the crowd of well-wishers or reporters or, I secretly hoped, home to peel off their fake eyelashes and shape-wear and watch TV on the couch with someone they loved. I left early. There was nowhere I have ever belonged less in my entire life. But it’s hard to imagine anyone belonging there, in the pushy, loud, cheek-kissing din of over-tanned and underfed people. Everything looks better on TV. 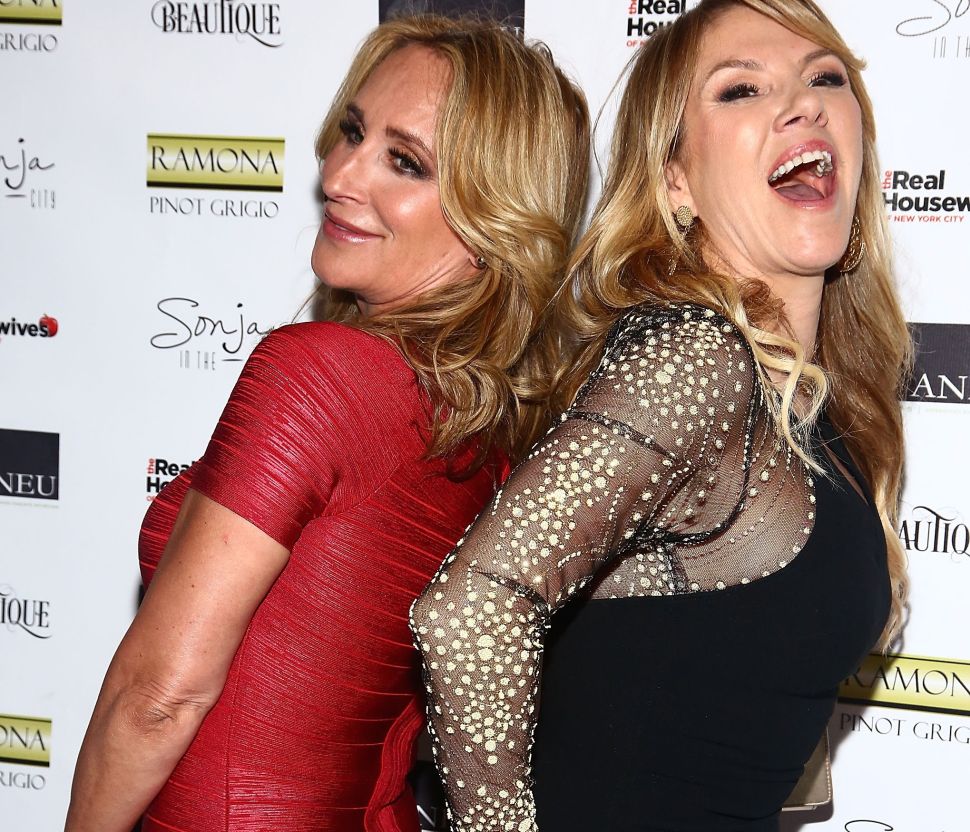