Ayaan Hirsi Ali can recount in virtual slow motion the events of November 2, 2004—the day Theo Van Gogh, her collaborator on a film about abuse of women in certain Muslim societies, was assassinated. The Somali-born women’s rights advocate and writer, then a member of the Dutch Parliament, had herself received innumerable death threats for writing the film, entitled Submission. The Dutch Minister of Interior informed her of what had occurred: Mr. Van Gogh was shot eight times and left on an Amsterdam street with his throat slit and a large knife stuck in his chest. The killer used a second knife to attach a note to Mr. Van Gogh’s chest, warning of violence to Western nations and to Jews, and pronouncing a death sentence against Ms. Hirsi Ali.

The death sentence began this way: “In the name of Allah most gracious, most merciful,” and went on to proclaim that “all enemies of Islam will be destroyed.”

With an estimated 140 million girls and women throughout the world subjected to genital mutilation, with thousands murdered each year in so-called “honor killings” and untold millions forced to marry against their will, one would suppose that Ms. Hirsi Ali—the world’s preeminent critic of these practices and advocate on behalf of their victims—would be universally hailed by those who style themselves as progressives. Since Ms. Hirsi Ali’s advocacy for women has meant that she has lived under death threats for over a decade, one would be the more justified in imagining that she would be regarded as a hero by progressives everywhere. But despite a body of work as a parliamentarian, a writer and as head of a foundation that is devoted to the protection of women and has earned her recognition by TIME Magazine as one of the 100 most important people on the planet, Ms. Hirsi Ali finds herself the object of vitriol by some on the left, who cannot bear her for this reason: She is critical of Islam and what she sees in the Muslim world as not only an indulgence in violence but a practice of justifying it. Ms. Hirsi Ali says unapologetically that in Islam there exists a “culture of misogyny [that] needs to be addressed quickly and frankly, and we must not censor ourselves.”

But as Ms. Hirsi Ali works to combat those challenges, she finds herself battling the stubborn, unrelenting forces that would have her censored. The efforts to tar her with the tried-and-true epithet of “Islamophobic” come both from powerful Muslim enterprises that would like to squash her like a bug and some on the left, for whom a narrative of the Muslim world as victims and the West as victimizers is precious and comfortable. They regard Ms. Hirsi Ali as trouble. She is, after all, a Muslim-born woman who personally experienced the very abuse that she criticizes. The 46-year-old is also a superb writer, a winning speaker, inarguably courageous and telegenic to boot. She is an atheist as well. For those who wish to suppress criticism of the plight of women under Islam, she is, in short, a disaster.

Ms. Hirsi Ali warns against use of the words “extreme” and “radical” to describe as peripheral an ideology which, she argues, is in fact quite prevalent in Muslim communities around the globe, and which leads easily to violence—whether in the form of female genital mutilation or honor killings or wife-beating or suicide bombings. She views the reliance on those words as self-delusion, a soothing, self-administered palliative whose effect is to mask evidence that violence is the largely natural extension of fundamentalist values sternly dictated and widely embraced in Muslim communities—values that encourage harsh treatment of women and strict, even brutal, punishment of non-believers. Her warnings, and those of others who risk their reputations and lives to criticize Islamic institutions, are distinctly unwelcome in many Western quarters, where they are regarded as grievously politically incorrect, and where the “few-bad-apples” narrative of Islamic extremism is vastly preferred.

‘They fear critical thinking. Anyone in the Islamic world with intelligence who takes a minute to think will not like what they see.’

A December 2015 report by the Pew Research Center reinforces Ms. Hirsi Ali’s point. Decisive if not overwhelming majorities of Muslims in most of the 39 countries surveyed wanted Sharia law—a fundamentalist legal code based on the Koran and other Islamic texts—to be the official law of the land in their countries. In Indonesia, home to the world’s largest Muslim population, 77 percent of Muslims said they want Sharia law imposed. In Pakistan the figure was 84 percent; in the Palestinian territories, 89 percent; in Iraq, 91 percent and in Afghanistan it reached 99 percent. The accepted line that Islamic fundamentalism and the embrace of violence are the result of grievance and alienation is worse than wishful thinking, Ms. Hirsi Ali says. It is “wrong, it is dangerous and it is suicidal,” she says, pointing to Great Britain to illustrate her argument. A poll conducted this month found that 88 percent of British Muslims believe Britain is a good place to live. The poll shed light on that same community’s adherence to values that Western politicians dismiss as aberrant. One-third of British Muslims refuse to condemn the stoning of women accused of adultery. Thirty-nine percent believe women should always obey their husbands. And almost a quarter believe Sharia law should replace British law in areas with large Muslim populations. An estimated 100,000 British Muslims express sympathy for suicide bombings and other terrorist attacks, and two-thirds say they would refuse to contact law enforcement if they believed someone close to them was collaborating with jihadists.

Whether out of political expediency or superficiality, Western politicians and commentators treat individuals like those responsible for the massacres in France, Belgium, California and across the Middle East and Africa as mere “pop-ups”—making it seem as though, as Ms. Hirsi Ali says, “a 21-year-old wakes up one day and decides to commit jihad.” She wryly refers to this as “Sudden Jihadi Syndrome.” Ms. Hirsi Ali views matters quite differently. “That’s not the way it works,” she says. “This is the product of indoctrination that goes on year after year. In North America and Europe [no less than elsewhere] they preach that jihad is obligatory. They may preach that there is a time and a place for jihad, but they preach it.”

In mosques and at diverse sites across the Internet, instructions are delivered to punish non-believers, dissenters or even potential skeptics, and justifications for violence in the name of Islam are conveyed. These practices, Ms. Hirsi Ali says, are pervasive, unrelenting and extremely well funded by Muslim countries, wealthy donors and institutions, and it is bizarre to pretend otherwise. “It is time to drop the euphemisms and verbal contortions,” she has written. Ms. Hirsi Ali and others who have called for a more realistic assessment of the link between promotion of Islamic law and violence against women are routinely accused of being bigots, Zionist stooges or mouthpieces for the far-right. In America, where she sought refuge ten years ago, Ms. Hirsi Ali has been attacked by organizations like the Council on American-Islamic Relations, which manifestly does not want her speaking out and writing and thereby gaining publicity and potential traction for her views. Ibrahim Hooper, CAIR’s spokesman, accuses her of being “one of the worst of the worst of Islam haters in America, not only in America but worldwide.”

This is hardly surprising: While other Muslim dissenters have privately expressed disgust for what they believe is CAIR‘s obstruction of the U.S. government’s efforts to counter Islamic extremism, they do not wish to do so publicly. But Ms. Hirsi Ali has no such reticence, and has characterized CAIR as “an American front for the Muslim Brotherhood.”

She is hardly alone in that view. The Department of Justice named CAIR as an un-indicted co-conspirator in a criminal prosecution of a Hamas funding enterprise, and an FBI Special Agent testified that CAIR was “a front group for Hamas.” The attacks on her by CAIR members and those of similar organizations neither surprise Ms. Hirsi Ali nor disturb her. “They want everyone to get out of their way,” she says. “They fear critical thinking. Anyone in the Islamic world with intelligence who takes a minute to think will not like what they see.” She takes satisfaction in knowing that the advocacy of those Muslims who have the courage to speak up has encouraged other Muslims to dare to do the same—a development that she says fills her with hope but that causes powerful interests in the Islamic world to feel dread and anger.

Exhibit A is the Organization of Islamic Cooperation, the 57-nation Islamic bloc headquartered in Saudi Arabia, which has attempted to codify a global ban on criticism of Islamic law. Many of the OIC’s members brutally enforce against their citizenry their own versions of such prohibitions, and promote an international effort to criminalize all criticism of repression of women by invoking “religious tolerance,” of all things. “A lot of countries in Europe are indulging this,” Ms. Hirsi Ali adds. She notes that Congressional hearings held since September 11, 2001 have repeatedly cited the role of Saudi Arabia and other Gulf states in spreading an ideology that praises misogyny in particular and retaliation against non-believers in general, and yet there has been no discernible change in U.S. policy toward these nations. “It has gotten worse,” Ms. Hirsi Ali says of the Saudis’ role in fomenting fundamentalist Islam. “The Saudi lobby is so strong.”

More perplexing to Ms. Hirsi Ali is the hostility leveled at her by some on the left for her efforts to challenge Islamic law and teachings. These critics profess to care about women’s rights but cannot bring themselves to criticize those who trample on them as long as the misogynist possesses an address in the Muslim world. At a recent panel held at the Women in the World summit in New York, the moderator accused Ms. Hirsi Ali of “picking only on Islam.” She countered: “I embrace Muslims but I reject Islamic law … because it’s totalitarian, because it’s bigoted and especially bigoted against women.” The anger she stirs on the left confounds her. “You have to ask yourself why anyone would align with proponents of Islamic law,” she says with wonder.

Ms. Hirsi Ali has no good answer to this question, and she is not the only one. “How do I get liberals to understand that we are the liberals in this debate?” television host Bill Maher asked her about the subjugation of women in Muslim communities around the world and the indulgence in violence that is taught there. Ms. Hirsi Ali is doing her best. What is terribly unclear is whether the left is prepared to listen. 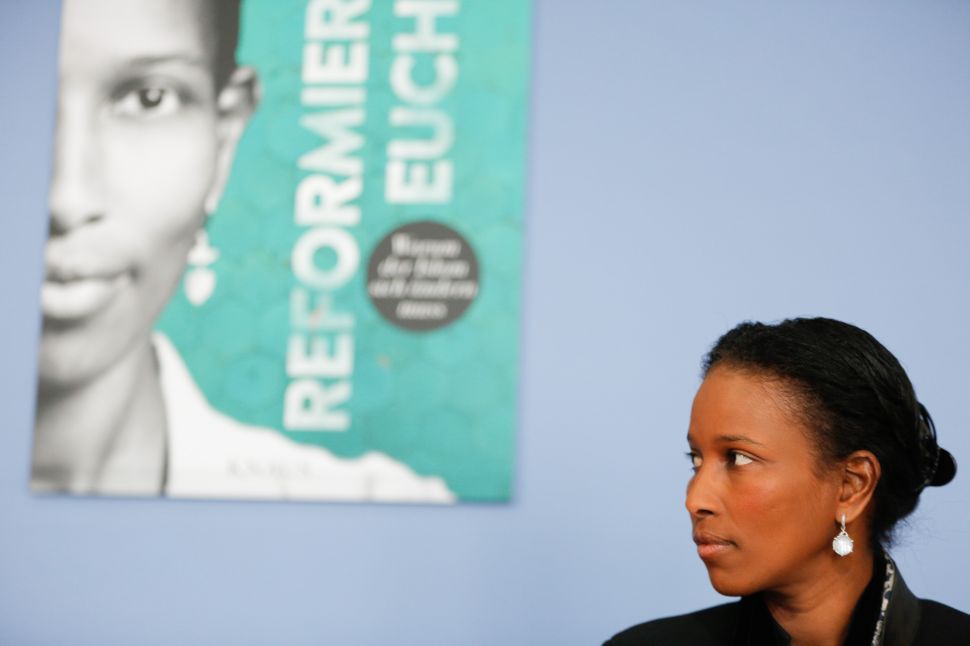