Who could’ve imagined a year ago that Ted Cruz, a Texas senator, would be touring a matzoh bakery in Brighton Beach?

But there Mr. Cruz was, bounding out of his black Lincoln Navigator on Ocean Parkway to enter the snug confines of the Chabad Neshama Center to roll some dough with Orthodox Jewish schoolchildren. After a visit to the bakery this afternoon, he traveled up the block to the Jewish Center of Brighton Beach, where he conferred with community leaders unused to meeting with a presidential candidate. Yeshiva boys mobbed him when he emerged, some wearing the red Cruz yarmulkes a volunteer had distributed.

Mr. Cruz didn’t say much to reporters, so the rationale of such a trip to the seaside community wasn’t made clear, at least from his own mouth. But in the southern reaches of Brooklyn, where Soviet emigres still link progressives to communists and anti-Obama graffiti, along with Trump and Ben Carson bumper stickers, can be found, a Republican presidential candidate can find a warm welcome.

David Storobin, like many other Republicans, knows a lot of people supporting Mr. Cruz’s arch-rival, Donald Trump, for president.

“They all give the same answer,” he said. “They’re sick and tired of political correctness. He says the things that are not supposed to be necessarily said and they like that.”

But Mr. Storobin, an attorney, is backing Mr. Cruz, and helping to introduce him to the borough’s conservative Russian-American and Jewish community. Galvanizing Russian immigrants and Orthodox Jews angry at the political system, Mr. Storobin defeated a candidate backed by the Democratic establishment to win a State Senate seat four years ago. Though he eventually lost his re-election bid after he was redistricted into a new area, Mr. Storobin has remained politically active, hoping that Mr. Cruz’s unvarnished conservatism can win over his neighbors in heavily Russian Brighton Beach, where Mr. Trump’s bomb-throwing has many fans.

“What plays well is something [Mr. Cruz] was criticized for, mainly that people said he got into fights with a lot of his colleagues, calling the Republican leadership liars,” Mr. Storobin said, referring to the time Mr. Cruz branded Senate Majority Leader Mitch McConnell a “liar.” “The reality is we on the ground have been calling them liars for a long time.”

Much has been made of Mr. Cruz’s ability to micro-target voters to pick up delegates in towns and cities that otherwise may be hostile to a very conservative Republican from Texas. New York is no exception, and it’s not an accident that Mr. Cruz was campaigning in the heavily Democratic Bronx and Brooklyn. New York’s Republican primary awards delegates proportionally by congressional district; visiting a matzoh bakery in Brighton Beach, a neighborhood tucked into Democrat Hakeem Jeffries’ congressional district, is a clever play on multiple levels, said Michael Fragin, a Republican consultant unaffiliated with the presidential campaigns.

“What he’s doing is actually what we’ve seen from Ted Cruz over and over. He’s going where the delegates are,” Mr. Fragin said. “There’s just too many Republicans in places like Long Island for him to compete with Donald Trump.”

Mr. Fragin pointed out the matzoh bakery is run by members of the Chabad-Lubavitch Hasidic sect, which is based in the Brooklyn neighborhood of Crown Heights. Mr. Fragin said there tends to be more Orthodox Jews in Crown Heights who are registered Republicans, and news of Mr. Cruz’s visit would very likely carry to them.

“Cruz has a very good shot at getting deeply conservative pro-Israel registered Republicans to vote for him,” Mr. Fragin said. “People who register as Republicans in the Orthodox community know they won’t have much of a say in local elections.”

Mr. Cruz has much to recommend for Brooklyn’s Orthodox Jews, who tend to be socially and fiscally conservative. He is an unapologetic defender of Israel, as well as parochial schools. He often talks about how deeply religious people are under attack in America, a message that resonates with evangelical Christians and observant Jews alike. His deputy chief of staff, Nick Muzin, is an Orthodox Jew, and traveled with him to the bakery today.

Most Orthodox Jews in Brooklyn and other boroughs, however, are registered Democrats, and can’t vote in New York’s closed primary. Even though they may disagree with much of what an increasingly liberal Democratic Party stands for, they keep their party registration to sway the outcome of Democratic primaries in their own neighborhoods, helping to elect Democrats who share some of their values.

The 8th Congressional District where Mr. Cruz journeyed to today offers a window into his plan. There are a little less than 30,000 registered Republicans there, a mere crumb of the 287,000 Democrats, and as little as 3,000 may show up for the primary, according to Jerry Skurnik, a Democratic consultant who runs Prime New York, a firm that compiles data on voters. But if Mr. Cruz can win over a significant chunk of that 3,000, he has a chance to walk away with up to 3 delegates, especially if he somehow managed to win 50 percent of the vote. (New York has 95 delegates total.)

Mr. Skurnik said there are about six congressional districts in the city, including Mr. Jeffries’, where Republican Orthodox Jews or Russians could play a significant role in the GOP primary. All are represented by Democrats.

Knowing Mr. Cruz, he’ll probably end up in a few more neighborhoods at the outer reaches of the city before April 19. 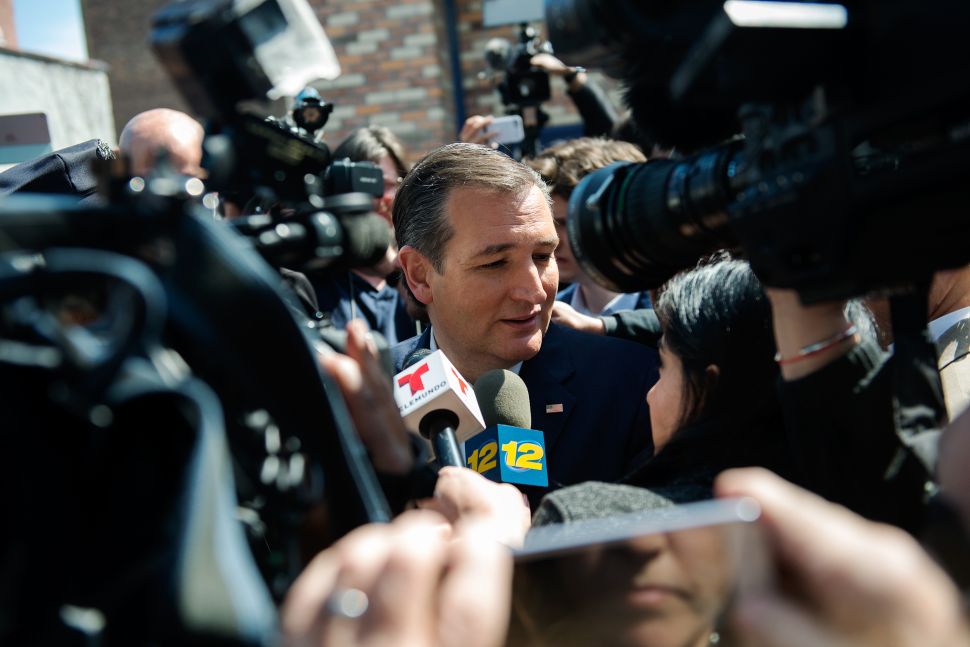