A fixture of French medicine since 1966, SOS Médecins provides home care to sick patients so they don’t have to go to the emergency room—the company’s doctors treat an average of six million patients every year.

When Gaspard de Dreuzy moved from Paris to New York, he thought a system similar to SOS would work well in the Big Apple. So in 2013 he teamed up with Uber cofounder Oscar Salazar to create Pager, an Uber for home health care. The on-demand healthcare platform available on the App Store connects patients with healthcare in their home, and is available every day from 8 AM to 8 PM.

Anyone who downloads Pager can start a free online chat with a nurse, or request a phone consultation. If the nurse determines that a doctor visit is necessary, the patient then schedules a time within the next two hours for the doctor to call or video chat them, or come to their house.

“The home visit concept is core to what we’re doing,” Mr. de Dreuzy told the Observer. “We want to deliver a better patient experience and lower the cost of care.”

Pager’s board-certified physicians work at hospitals throughout the city—when they finish their shifts at their home institution they freelance for Pager. They provide urgent care, first aid, physicals and flu shots to anyone six months of age or older.

The doctors are equipped to treat everything from fevers and colds to urinary tract infections and strep throat. They can also order lab tests and email prescriptions to a pharmacy.

Pager also aims to be cost effective for its customers—phone consultations with nurses cost $25, and the first home visit with a doctor is $50 (subsequent visits cost $200). Flu shots cost $25, and a physical is $100. One caveat: Pager currently accepts no insurance and requires credit card payments.

If a patient needs additional care, the Pager doctor can refer them to an outside health care provider or hospital. In fact, the app’s referral network recently grew thanks to Pager’s new partnership with Weill Cornell Medicine.

“In the past, referral to the ER has been a disjointed process,” Andrew Chomer, Pager’s executive vice president of marketing and sales, told the Observer. “Now if a patient needs follow-up care with a specialist, we can get them an appointment with one of the top medical centers in the region within the next couple of days. We can own the entire continuity of care.”

While Pager is currently only working with doctors in the five boroughs, the team plans to expand to neighboring states like New Jersey and Connecticut, and eventually the entire country.

In spite of the app’s ever growing footprint, the Urgent Care Association of America said in a statement emailed to the Observer that Pager and services like it had shortcomings that kept it from succeeding in the $14.5 billion industry.

“We want to act as a GPS for patients to navigate where they want to go and give them the best experience they could possibly have.”

Tom Charland, head of the consulting and analysis firm Merchant Medicine, also questioned whether Pager an succeed; he cautioned that Pager shouldn’t rely on “early adopters.”

“Healthcare is very personal, and early adopters are a small market,” Mr. Charland said. “There’s a trust issue that has to be overcome.”

Mr. Charland also questioned whether Pager can grow if it refuses to take insurance. “Those that don’t take insurance fail quickly,” he said. “Many people want to keep going to their primary doctor or urgent care office.”

According to Mr. Chomer, Pager expects to begin taking insurance-based payments from customers using Medicare and Medicaid by the third quarter of 2016.

“Insurance is absolutely part of our roadmap,” Mr. Chomer said.

The Pager team concluded by saying that rather than competing with hospitals or urgent care centers, their aim was to work with them for a better healthcare experience.

“We want to act as a GPS for patients to navigate where they want to go and give them the best experience they could possibly have,” Mr. Chomer said.

“Health systems are here to stay,” added Mr. de Dreuzy, “and we are allies, not enemies.” 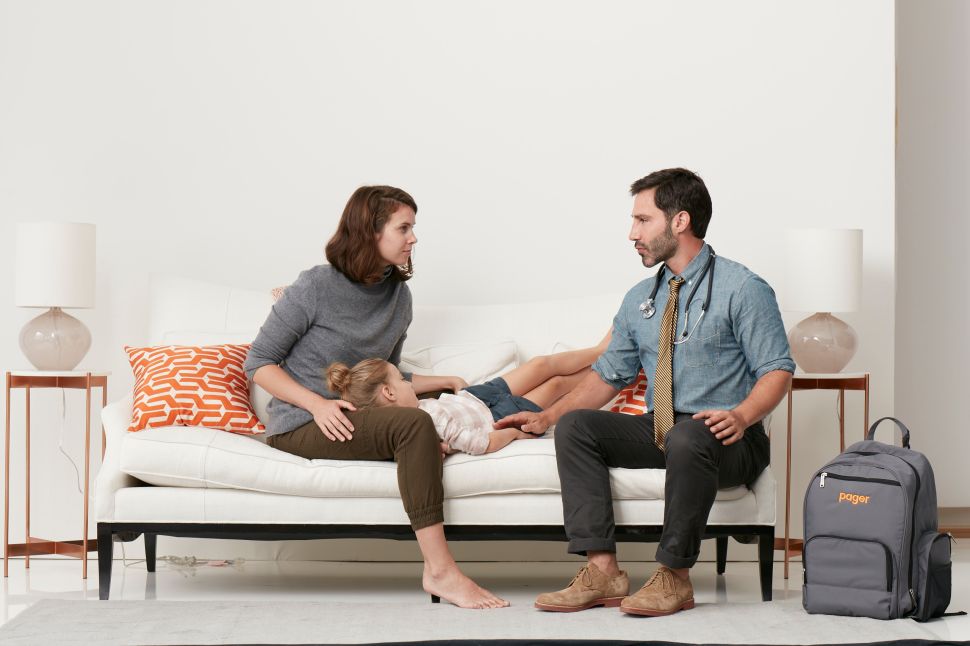