There’s a lot of hype going into tonight’s televised Democratic debate. You’ve got two candidates who don’t like each other anymore and the tableau of New York City, where everything is bigger and louder. The increasingly liberal Democratic establishment is all about Hillary Clinton, but its heart may be beating for Bernie Sanders.

As others have written, tonight is a chance, perhaps the Vermont senator’s last, to alter the trajectory of the presidential race. Pundits tend to overstate what happens at debates; yes, Sen. Marco Rubio’s gaffe before the New Hampshire primary cost him there, but there were a variety of other factors that contributed to the eventual collapse of his campaign. Both Democratic candidates have proved themselves able debaters and the CNN showdown should get plenty nasty, with questions intended to goad the combatants on. Expect Mr. Sanders to have to answer for how “qualified” he believes Ms. Clinton is, and for the former secretary of state to question his grasp of foreign policy.

Ms. Clinton, a former New York senator, leads Mr. Sanders by an average of about 13 points in the polls. That’s a lot of ground to make up in less than a week. It’s true that Mr. Sanders similarly trailed in Michigan’s Democratic primary and pulled off a startling upset, but the Wolverine State, unlike New York, holds an open primary. Only registered Democrats can vote on Tuesday and it’s far from clear the Sanders campaign ever made the effort to get their New York supporters to register Democrat by last October’s obscure deadline.

It’s possible that under an open primary, Mr. Sanders could defeat Ms. Clinton in New York, or come much closer to winning. The size of his rallies, particularly in the five boroughs where Ms. Clinton expects to dominate, are remarkable. Nearly 20,000 people came to watch the 74-year-old democratic socialist speak in the South Bronx last month. 10,000 or so more jammed Washington Square Park last night, with additional thousands ringing the streets, like the Beatles or Taylor Swift had decided to play a surprise concert. Or, more fittingly given the area’s lefty history, Woodstock had come to Greenwich Village. How many of these people are actually registered Democrats?

That isn’t to say that the New York system is “rigged” against Mr. Sanders. New York has held closed primaries for decades. It could be argued the rule is pro-establishment or anti-insurgent; it may just save Ms. Clinton, after all. But what may also rescue Ms. Clinton from an embarrassing setback here is Mr. Sanders’ failure to connect with African-Americans and urban voters in general, as well as the dislike higher-income suburban voters could feel towards a proud socialist.

New York State is not necessarily one of the most liberal places in the country, despite what both conservatives and progressives may think. Putting aside the fact that Republicans have served as mayors of New York City and governors of the state, the powerful Democrats that emerge, with few exceptions, tend to be ambivalently progressive. Gov. Andrew Cuomo is a Clintonian triangulator at heart, even if he now supports the in-vogue $15 minimum wage. The state’s two senators and most of its congressional delegation don’t typically occupy the vanguard of the left, like a Keith Ellison or a Sherrod Brown. Not a single member of the City Council’s 19-member Progressive Caucus saw fit to endorse Mr. Sanders, a remarkable fact when you consider that he’s one of the most successful left-wing presidential candidates in American history. And on the media side, there’s no major editorial board that could be characterized as unabashedly liberal. (The New York Times endorsed Michael Bloomberg and Christine Quinn, after all.)

Mr. Sanders, to put it bluntly, is swimming upstream here. He may land his punches against Ms. Clinton tonight, and win in the eyes of voters, but it will take more than a night on CNN to get him a victory on Tuesday. It will take much more. 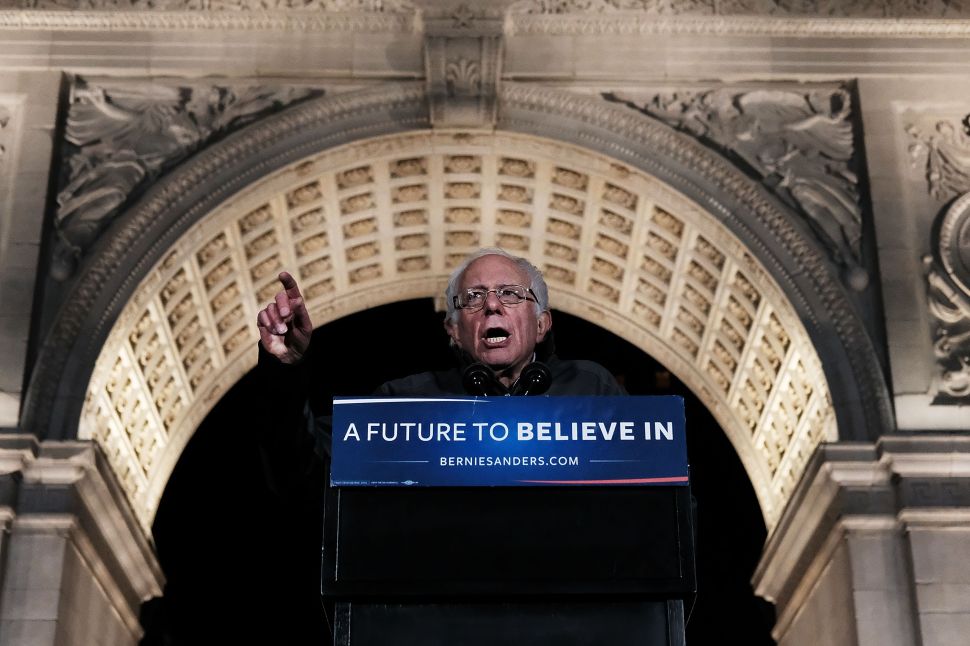