During With All Due Respect, they frequently show a graphic on the right side of the TV screen that looks like a batting order or a shopping list.

This chart of items is the agenda for this fast-paced daily show about politics, now seen at 6 p.m. on MSNBC as well as at 5 p.m. on Bloomberg Politics.

Last Monday, one of the items for co-hosts Mark Halperin and John Heilemann was titled “Roger, Roger.” The guest was to be Roger Stone, an author, political crackpot and unrepentant racist who has been getting banned from just about everywhere except Fox News Channel and Bloomberg.

His books include The Clintons’ War on Women and Jeb! And the Bush Crime Family.

Mr. Stone appeared in the 5 p.m. hour on Bloomberg. But when the show immediately repeated on MSNBC, the Stone section was replaced for a live look at a John Kasich speech, an event no American would want to miss. As soon as the Stone segment ended, MSNBC went back to “W.A.D.R.”

This was no coincidence. MSNBC, like CNN, won’t allow Mr. Stone on its air. The decision, an MSNBC spokesman said Thursday, was made “weeks ago.” According to Media Matters, Mr. Stone’s tweets target cable news personalities with terms like “arrogant know-it-all Negro” and “quota hires” and “the muff diver.”

A former aide to President Nixon who has a Nixon tattoo on his back, Mr. Stone is a friend of Republican Presidential candidate Donald Trump and a supporter. Recently, Mr. Stone has called for intimidation against Republican delegates at the convention in Cleveland in July.

Monday’s cleanly played edit of Mr. Stone by MSNBC showed the unusual decisions that must go into a quirky show that appears on two networks. MSNBC picked up With All Due Respect at the start of the year to bridge the gap between Meet the Press Daily with Chuck Todd at 5 p.m. and Hardball with Chris Matthews at 7 p.m.

Mr. Halperin and Mr. Heilemann—frequent guests on MSNBC’s Morning Joe—fill a void left after activist Al Sharpton’s show moved from every week day to only Sunday morning with MSNBC trying to ease up on its liberal, progressive tilt and present a more moderate and measured tone, especially before the prime time hours.

The two hosts—if not quite Huntley-Brinkley—show a nice chemistry, rarely interrupting each other or shouting each other down as is too often the case on cable. They do respectfully disagree with each other and with guests. It’s almost as if MSNBC split Mr. Matthews in half and let him talk to himself. There’s a lot of savvy here.

The visual motif of the show is to use cameras in motion, swooping at odd angles across wall screens that look like billboards. Then the camera dives down and in to where the guests cluster in chairs. Most of the time, it won’t make you dizzy.

When segments are near their end, the producers show a count-down clock starting at 30 seconds that looks like a shot clock in the NBA. When it expires, there is a loud “Ding!” that sounds like a bell in a boxing ring. It’s unnecessarily ESPN-ish.

At times, the program is light-hearted. For instance, Monday’s show began with video and sound of the opening for the old “Lone Ranger” TV serial with Donald Trump’s face in place of the Masked Man.

With the Ranger riding his horse Silver in living black-and-white and the William Tell Overture playing, the W.A.D.R. production crew played audio clips of some of Mr. Trump’s more macho statements in his campaign for the Republican Presidential nomination.

A Wednesday feature about Ms. Clinton’s laugh included a backdrop graphic display reminiscent of the “Laugh-in” comedy show on NBC in the late 1960s. Ms. Clinton seemed to be the Goldie Hawn in the design. Another nice historic touch showed video of radio shock jock Don Imus interviewing Governor Bill Clinton of Arkansas during the 1992 campaign before the New York primary.

“I’m surprised you didn’t call me ‘Bubba,’” Mr. Clinton told Mr. Imus. “It’s an honorable term where I come from. It’s southern for ‘Mensch.’” Those who remember that race might recall how that Imus appearance helped Clinton’s campaign at a critical time.

Neither co-host of W.A.D.R. have the searing wit of Imus, but both have a knack for a wise-crack. On Wednesday, Mr. Halperin said the Republicans should solve their presidential candidate dilemma by choosing Dick Cheney, the former vice-president.

Their format is varied and flexible—within its framework—and allows for many guests from MSNBC to conveniently drop by the studio and boost their current roles and cross-promote.

Those in remote locations provide some good viewing, as Tad Devine of the Bernie Sanders campaign did Thursday when discussing the New York primary and the recent spat between the two Democratic camps about which candidate is most “qualified.”

“You know something, we’re not going to go into New York and let them run that kind of campaign against Bernie Sanders,” he said. “They make think, because he’s from Vermont, it’s a small state, he cannot handle the rough and tumble politics of a New York primary. Well, we’ll find out in the next several days who can handle it and who can’t.”

Then Mr. Heilemann asked his guest: “Tad, your colleague, Jeff Weaver, said today that Secretary Clinton has made various deals with the devil. What are those deals? Who is the devil.”

Mr. Devine laughed it off.

“It was a colorful way that Jeff had of expressing the fact Hillary Clinton has decided to rely on a corrupt system of campaign finance,” he said. “And, by the way, they have a dark money Super PAC out there and we have no idea where that money came from.” He said it might have $25 million.

Thursday’s show—although filled with New York stuff—was done in Kansas City, Mo., which allowed the hosts to greet a guest you don’t see much on major cable: Mayor Sly James, who wore an orange bow-tie with white polka dots, a look one doesn’t see every day..

They asked him about increasing bitterness in the Clinton-Sanders campaign and what would he say to the two of them. Mr. James said he’d invite both to go out and have a drink and shake hands.

“I’m going to write this up as just being testy, being near the end and fighting for every single vote,” Mr. James said. “At the end of the day, Bernie Sanders and Hillary Clinton will find a way to get together on these issues and support each other because it is in the best interest of the people of this country that they do.” 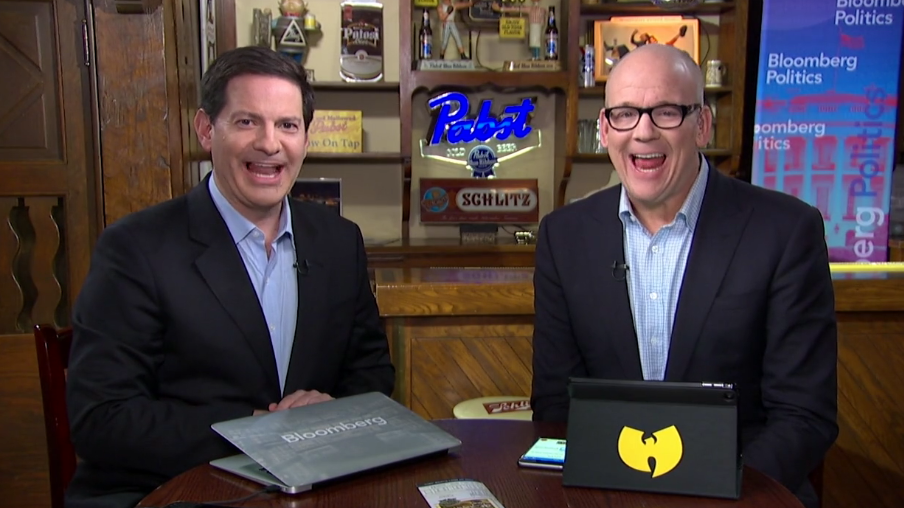