Without the development of technology, modern dress could not exist. The Costume Institute at the Met’s recently opened exhibition, Manus x Machina: Fashion in an Age of Technology, focuses on the history and development of couture, often made possible by evolving technology. Particular attention is paid to the technological innovations behind couture’s métiers, from featherwork to embroidery, allowing designers to create spectacular garments. But there have been many innovations throughout history that have moved fashion and clothing forward. Here are 10 technological advancements — from the archaic and simple needle, to the thoroughly modern 3D printer — that have had a significant impact on the way we wear clothes.

The spinning wheel was invented in China around 1000 AD. Before, the process for creating thread was laborious and inefficient: fibers were twisted or spun by hand on some form of spindle. The silkworm, the caterpillars that produce silk, are native to China and when their silk was spun by hand, it was uneven and undesirable. The introduction of the spinning wheel changed that, producing soft, shiny fabric that was in great demand in the West, thus launching The Silk Road, and creating the first global marketplace where goods were traded internationally.

Mills took the spinning wheel to the next level. The first were established in 1740 to hold spinning machinery that spun fiber without the use of human hand. It also housed other mechanized inventions, like the power loom, which made the process of weaving fiber into fabric more efficient. These mills took clothes-making from a craft-centric model to a factory-centric model, leading directly to the Industrial Revolution. Mills kept prices down and created a consistently high quality product. It also allowed the middle class and the working class to afford more clothing, and become a part of the fashion system by copying the clothes of the wealthy. Mills aided the development of haute couture. The silk mills in Lyons, France, for example, were used extensively by Charles Frederick Worth, the founder of haute couture, to create his collections.

The sewing machine was invented in 1830 by Frenchman Barthelemy Thimonnier. It had a barbed needle and the machine was made entirely out of wood. Worth used the sewing machine as much as possible and only relied on hand sewing for delicate finishing techniques, dispelling the notion that the haute couture industry is based on hand sewing. Sewing machines also reduced the time it took to make a dress, allowing ordinary people to make and acquire more clothes.

Before Walter Henry Perkin Jr. invented the first aniline chemical dye in 1856, dyeing fabrics was an expensive process. The most expensive was purple dye which required the harvesting of thousands of tiny cochineal snails in an infamously smelly process which only produced a tiny amount of dye. Clothing was made in a limited amount of colors, and purple was reserved for the very wealthy. But when Mr. Perkin, a chemist, accidentally discovered mauveine, or aniline purple, by mixing oxidized aniline with wine, brilliantly hued purple fabrics could be obtained cheaply. A fashion for purple-hued dresses soon followed suit. As the synthetic dye industry grew and more colors were developed, a taste for brilliantly colored fashion developed. It also allowed for the development of cheap, printed fabric.

In 1935, chemists at DuPont Chemicals, led by Wallace Carothers, patented nylon, a synthetic silk fiber created by combining chemicals including amine, hexamethylene diamine and adipic acid. In 1938, nylon was introduced to the public, and it was an instant hit. It ushered in an era of fashion being about more than just aesthetic beauty; it was about comfort and disposability. When it was first introduced, nylon was primarily used as a replacement for silk stockings. Silk stockings were expensive, so the relatively cheap nylon stockings became the primary way women indulged in the trend. Now, nylon can even be found in garments like dresses and trousers.

Before spandex, form-fitting clothes like girdles were made of rubber. Rubber is a non-breathable material, which made girdles quite uncomfortable. Changing the status quo didn’t become a priority until WWII, when rubber was rationed and diverted for military use. Finally, in 1954, a chemist at DuPont named Joseph C. Shivers invented the spandex fiber — a soft, stretchable material — which was marketed as Lycra when it was introduced to consumers in 1959, and was used to create comfortable, soft-support pantyhose and other undergarments. But spandex’s influence on fashion was far-reaching. It introduced the idea that fashion could be about more than mere aesthetics, it could also be about performance. It changed swimwear, allowing for freedom of movement and a close-fit even after a dip in the pool. It also found its way onto ski teams and cyclists because of spandex’s aerodynamic qualities.

In 1917, a rubber company created Keds, canvas-topped shoes with rubber soles that became the world’s first sneaker, thanks to technological developments in rubber production. In 1924, a German named Adi Dassler created sneaker brand Adidas, which quickly became the most popular athletic shoe. Track star Jessie Owens even wore them when he won 4 gold medals at the 1936 Berlin Olympics. But they only became a fashion item in the 1950s when James Dean wore them in the movie Rebel Without a Cause. Sneakers didn’t reach cult status until 1984, when Michael Jordan signed a contract with Nike to wear sneakers called Air Jordans, which is the most famous sneaker ever made (that is, until Kanye West’s Yeezys came out onto the market in 2009). Now, sneakers are made for every type of activity, from cross-training to running. In recent years, sneakers have become a major fashion trend, with designers like Karl Lagerfeld for Chanel Couture and Giuseppe Zanotti designing their own version of the athletic shoe.

Gore-Tex is -repellent techno fabric made from polymer material that was discovered in 1969 by Robert W. Gore. A lightweight, waterproof fabric, Gore-Tex is used mainly in athletic-wear and outer-wear and has become an important part of seasonal dressing. Its existence allows aesthetically pleasing clothes to also be functional and make the wearer’s life easier and more comfortable.

3D printing, a method of printing 3-dimensional objects, has only recently become a part of the mainstream, but it was invented as early as 1983 by Chuck Hull. Chuck Hull was working for a small business that made tough, protective coatings for tables via a liquid polymer that, when cured with an ultraviolet laser, solidified. Mr. Hull soon realized another application for the technology: a way to make prototypes, which then led to the invention of 3D printing. 3D printing’s effect on fashion is still unknown, as its application has so far been mostly experimental; the only major fashion designer who is known to actively work with it is Iris van Herpen. The material used to create fabric is still inflexible and unwieldy, but innovations on that front continue to be made, and the there have been major improvements to the speed at which objects print. It may take years until printing clothes at home becomes a reality, but once it does, it will likely upend fashion’s entire retail industry. 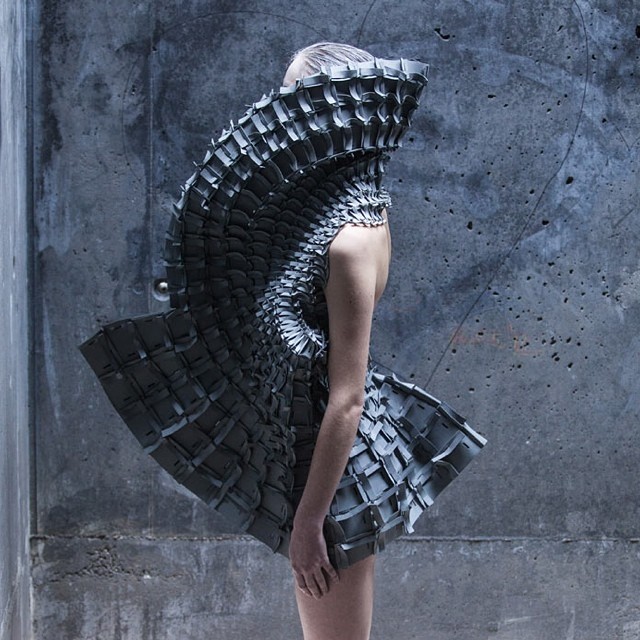