Opening: “Bp Laval: Basil Vaseline” at Fortnight Institute
The Fortnight Institute isn’t a school and “Basil Vaseline” isn’t an actual person (or a cooking/healing balm, for that matter). But as far as we know, Bp Laval is actually an artist who’s having a show. In 2014, the Canadian’s erotic drawings caught the eye of social-mediaphile Richard Prince on Twitter (see? people still use it), and then the art star bought a bunch of Mr. Laval’s work and showed some of it at his book/art shop Fulton Ryder. Now, the artist is checking back in with some hilariously whacked-out and perverted new paintings under the invented moniker “Basil Vaseline,” a personae that’s part Bowie, part William Gaddis and part storied art world debauchery. There’s no way this will suck.
Fortnight Institute, 60 East 4th Street, New York, 6-8 p.m.

Event: The Annual Whitney Gala & Studio Party at the Whitney Museum
The Whitney Museum has been in it’s new home for a year now, and they’ve put on some pretty damn good shows during that time, including an outside-the-box endeavor from filmmaker Laura Poitras and a massive show of New York’s ancient wizard of badassetry, Frank Stella. Therefore, the Whitney wants to celebrate (which in the art world means asking for money) with a fancy dinner that should “get a little crazy” with a performance by none other than Seal. If the dinner ticket feels a little pricey to you (it’s $7,500 a plate), no worries. You can still attend the glam Studio Party afterward for a relatively modest fee of $250, so you can boogie, drink and look like a cool person thanks to a giveaway tattoo series the museum has commissioned from hot young artists like Jamian Juliano-Villani and Elizabeth Jaeger.
Whitney Museum of American Art, 99 Gansevoort Street, New York, Gala: 7-9 p.m., Party: 9:30 p.m.-1 a.m.

Opening: MFA Thesis Exhibition at The New York Academy of Art
Not many people know about the NYAA outside of NYC, but it happens to be a breeding ground for potent old-school figurative painting, drawing and sculpture skills. Founded in 1982 by a group of NYC art-types (including Andy Warhol), the school still attracts renowned teachers like Will Cotton, Jenny Saville, Kurt Kauper and Eric Fischl. So their MFA exhibitions are always a good place to locate talented up-and-comers and maybe—just maybe—discover an artwork that speaks to you at a nice student price.
The New York Academy of Art, 111 Franklin Street, New York, 6-8 p.m.

Talk: “Visionaries: Blake, Friedrich, and their Contemporaries” at The Morgan Library & Museum
Yale University curator Matthew Hargraves will preside over this edition of the Morgan’s Lunchtime Lecture Series in order to tell us exactly how and why the Romantics felt the urge to um, romanticize. Practitioners of romanticism, including William Blake and Caspar David Friedrich, loved eschewing the mundanity of our material world in favor of laughing into the void while assuming a cocksure stance (something that has unsurprisingly appealed to mopey youths around the globe for over a century). But the Romantics were also instrumental in generating the stereotype of the “tortured artistic genius” that we all know and love today, so why not seize this talk as a chance to bond with your inner sullen teen?
The Morgan Library & Museum, 225 Madison Avenue, New York, 1 p.m., reservations recommended

Opening: “Trudy Benson: Spooky Action at a Distance” at Half Gallery
Pratt grad and squigglemaster Trudy Benson is back with a new series of punchy, graphic abstractions that continue to mine territory first sniffed out by painters like Jonathan Lasker and Kim MacConnel. Half Gallery owner and art-world svengali Bill Powers has a sixth sense for showing young artists right before they blow up, so keep an eye on Ms. Benson, who also works with Lower East Side stalwart Lisa Cooley. I know the UES seems far—and the 4,5,6 has been a torturous hellride lately—but it will likely be worth the trip.
Half Gallery, 43 East 78th Street, New York, 6-8p.m.

Auction: White Columns 2016 Benefit Exhibitions and Auction
Remember when White Columns use to have slide files chock full of artistic mediocrity from podunks all over the U.S.? No more. Now it’s a bastion of both sexy young art stars like Mira Dancy and tried-and-true art world conquerers like Peter Doig. Yes, those are just two of the over 100 enticing names in this exhibition/auction that will raise much-needed funds for the hip nonprofit that’s been overseen by curator, writer, artist and DJ, Matthew Higgs since 2004. As per usual, there’s a silent auction followed by a live auction of bigger lots. Tickets are required, and can be procured on the website, where you can also preview the artworks. Check it out, if for no other reason than to schmooze with art world royalty.
White Columns, 320 West 13th Street, New York, 7p.m.-onward

Talk: “This Is Not Your Mama’s MoMA: The Illusions of Modern Art” at El Museo del Barrio
In conjunction with their freaky-deaky show of ’60s-inspired Op and Kinetic Art titled “The Illusive Eye,” this Harlem museum has scheduled a talk between the show’s curator (who’s also the museum’s executive director) Jorge Daniel Veneciano and the esteemed New York Times critic and author of Are You Experienced?: How Psychedelic Consciousness Transformed Modern Art, Ken Johnson (who is clearly into that kind of stuff). The two will discuss psychedelic and occult properties within the history of Modern art—probably as they relate to the works in this show—and will likely field some bizarre questions from the stoners who actually managed to find their way up to Harlem.
El Museo del Barrio, 1230 Fifth Avenue, New York, 6:30-8 p.m.

Talk: “Louise Fishman in Conversation with David Salle” at 192 Books
Lauded feminist artist Louise Fishman tossed off the oppressive chains of the male-dominated medium of painting and took up sculpture in the ’60s and ’70s before eventually saying “f— that” and returning unapologetically to the splashy fun of painting (fortunately for us). Now she’s being interviewed by fellow painter David Salle on the release of her monograph (appropriately titled Louise Fishman) for her well-deserved retrospective at the Neuberger Museum of Art. And in case you need more of Ms. Fishman, there’s also a show of her work up at the Institute of Contemporary Art at the University of Pennsylvania. Somebody’s having a moment.
192 Books, 192 Tenth Avenue, New York, 7:00 p.m.

Opening: “Nicole Eisenman” at Anton Kern Gallery
Slapstick figurative painter Nicole Eisenman is back on the scene with a new gallery—and a New Museum retrospective to boot. The artist’s grandiose “girl-world” narratives have given way to this show of more introspective and personal paintings, which dwell on mundane moments like riding the train or drinking at a bar. The show will also feature one of her plaster sculptures, a series that was prominently featured in the 2013 Carnegie International, in Pittsburgh.
Anton Kern, 532 West 20th Street, New York, 6-8 p.m.

Talk: “Painters NYC Panel Discussion” at the ICI Curatorial Hub
Semi-related to the infamous painters blog of the mid-aughts known as “Paintersnyc” and fully related to a curated exhibition of the same name at El Museo de los Pintores Oaxaqueños in Oaxaca, Mexico, this talk is moderated by artist, curator and blog alumnus Maureen Cavanaugh and her co-curator in crime, Meghan Kent. The artists on the panel—Inka Essenhigh, Clare Grill and Eamon Ore-Giron—also happen to be in the Oaxaca show. They’ll all discuss “the artistic and studio practices revolving around the medium of painting in New York,” which could potentially cover a lot of territory or could end up being a two-hour discussion of brush head sizes—who knows? The event is free but you need to RSVP.
ICI Curatorial Hub, 401 Broadway, Suite 1620, New York, 6:30-8 p.m. 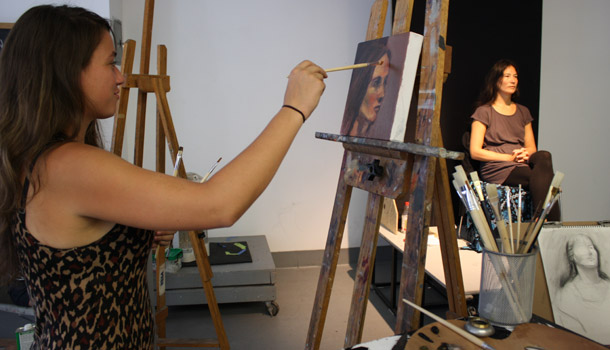