An untitled painting by Jean-Michel Basquiat broke the artist’s world auction record, selling for $57.3 million at Christie’s on May 10. (Photo: Christie

It was a packed house at Christie’s post-war and Contemporary evening sale on Tuesday night. Judging by the crowd, you’d think times are much more flush than they really are. But, apparently nothing brings out the 1 percent like whispers of a cooling art market. Are they looking for a good deal? Or do they just want to see the bubble slowly burst?

Sotheby’s may have set a terrifying tone Monday night with its disappointing Impressionist and Modern art sale, but Christie’s faired far better on Tuesday. Their evening sale totaled $318.4 million, with premiums, and landed just between pre-sale estimates of $285.6-398.2 million, with 87 percent of the 60 lots on offer sold.

“84 percent of the works were never auctioned before,” said vice president and head of evening sale Sara Friedlander. “Enormous freshness and quality prevailed.”

To top it off, the house managed to set an impressive new record with the $57.3 million sale of an untitled 1982 painting by Jean-Michel Basquiat, completed when the artist was only 22 years old. The work surpassed an estimate only described by the press release as “in excess of $40 million,” and sold to an Asian buyer, in a record for the artist at auction. Basquiat’s previous high mark was set by Christie’s in May 2013 with a painting from the same year titled Dustheads.

“It’s a tribute to this painting that we’re making records at a time when we’re not expected to be making them,” said international head of post-war and Contemporary Brett Gorvy.

The Basquiat buyer was revealed by the house to be 40-year-old Japanese businessman Yusaku Maezawa, founder of the online fashion retailer Zozotown and the Tokyo-based organization Contemporary Art Foundation. Mr. Maezawa is valued at $2.7 billion and currently ranked Japan’s 17th richest person, according to Forbes.

“When I encountered the work at the Christie’s New York preview, I had an immediate visceral connection it. Generationally, I relate to Basquiat’s culture and the essence of his life story,” said Mr. Maezawa in a statement. “Rather than monetary or investment value, I felt I had a personal responsibility to take care of this masterpiece and preserve it for the next generation.” 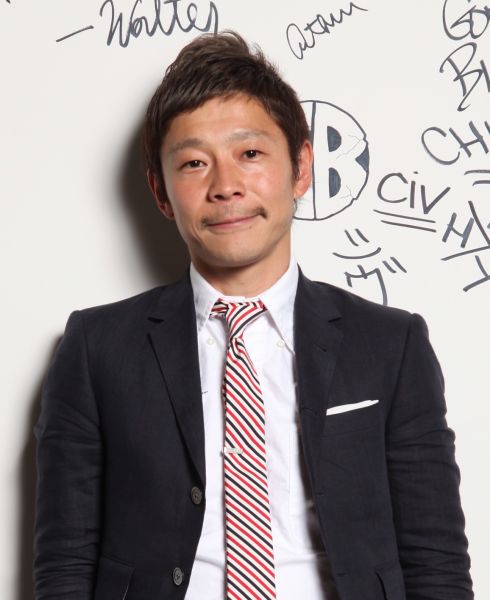 Yusaku Maezawa was revealed to be the buyer of Basquiat’s untitled painting, as well as the winning bidder of four other top lots on May 10. (Photo: ©Yusaku Maezawa)

The second big seller of the night was Mark Rothko’s blue and green oil painting No. 17, which topped out at $32.6 million, just above its low estimate. Unlike with the Basquiat, Mr. Pylkkänen had to squeeze every penny from the room, and lingered at the hammer for what seemed like ages coaxing his colleagues for one last bid.

The sale was hardly diverse, and thin for works by female artists. Only two women—Joan Mitchell and Agnes Martin—achieved high totals, which, out of 60 lots, is troubling. If offering fresh works to the market means resorting to a few dead and mostly white men, then the market has truly taken a step backward.

Despite rumors that Asian buying is slowing as a result of the flailing Chinese economy, there was “very strong” bidding from Asian clients, according to Ms. Friedlander, as well as from American and European clients. Heavy outreach in Asia paid off. Christie’s mentioned that a handful of the night’s works were taken to Shanghai for viewings.

On reservation from buyers, the feeling is that collectors this week have been “very measured—as measured as I’ve seen in the past three to four years,” said Mr. Pylkkänen. “A healthy market looks for what buyers want to buy.” This just happens to be a market where people are questioning prices, he explained. However, some collectors are still putting in the extra effort: an Asian collector flew around the world just for Tuesday night’s sale, said the house, and landed only an hour before the opening gavel, just in time to snap up one of tonight’s big lots.

Combined with Sunday’s night’s surprisingly successful “Bound to Fail” curated sale, Christie’s has made $396.5 million so far this week—far less than this time last year, but within range of their own projections. If slow and steady wins the race, Christie’s conservative estimates and tightly curated sales may pay off. By Thursday we’ll know if the Titanic is sinking, or if help is on the way.

UPDATE: This story has been updated to include the identity of the buyer of Jean-Michel Basquiat’s untitled record-setting painting, the buyer’s comments and additional information.