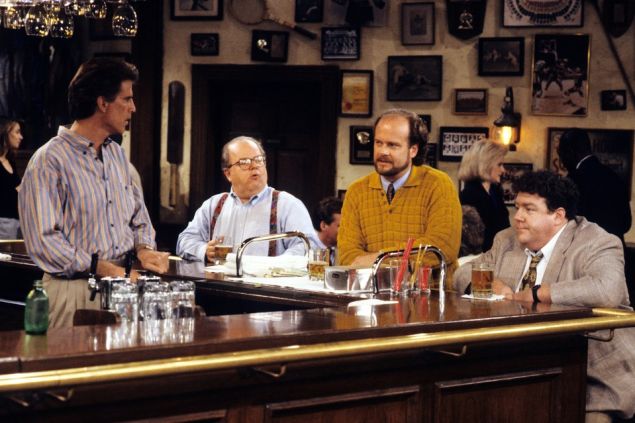 Not an AC/DC pinball machine in sight. Paramount/Everett Collection.

How do you do, fellow kids? I hate to say it but I haven’t written about TV in a while because I’ve been kind of depressed. Not just like, Adele depressed, but like, the dog episode of Futurama depressed. April 2016 was not a good month. I maxed out all of my credit cards donating to Bernie Sanders and he STILL got crushed in New York. I’ve spent every day since April 19th drowning my sorrows at this bar I found in Bushwick that sells Four Loko and lottery tickets… ok wait a minute, I just realized I’ve been hanging out in a BP station all week. Well, anyhow the point is, whenever I end a serious relationship with a trendy political bandwagon I’m on, I get down. When Occupy Wall Street got pushed out of Zuccotti Park I drank so much that I started one of those “Bruce Springsteen” punk bands and went on tour for a month. I ended up in Florida getting kicked out of an AA meeting for wearing a Guy Fawkes mask and screaming “we are Anonymous!” during other people’s monologues.

Whenever I get like this I watch a lot of TV. I’m the Andrew WK of pity partying. I always start out with Bojack Horseman and end up binge watching all of whatever Louis CK has been putting out lately in an attempt to over-intellectualize the fact that I’m sad. I was gonna do that earlier this week, but because of the aforementioned Bernie donations I couldn’t afford to download Horace and Pete, so I had to create a Horace and Pete facsimile by putting on Cheers while blasting Charles Mingus on my unpaid Spotify account. I also made a little orange goatee out of horse hair from Hobby Lobby and tried to stick it over Sam Malone’s face whenever he was on screen. Eventually, I got sick of hearing ads for Spotify Premium on Spotify Broke, so I turned the jazz off and just really watched the shit out of Cheers. That’s when it occurred to me that I’d never really watched the show. 3 hours later I was mesmerized.

Mark my words, Cheers has depth, Cheers has soul. Watching Cheers might be the only way to get over Bernie. The show revolves around a guy named Sam Malone, who somehow tends bar while not drinking and even more superhuman than that, he sticks his entire foot up on the bar when he talks to people. It’s really a bananas, off the wall premise. I’ve been fired from more bartending jobs than I can count, and I’ve never been able to just throw a foot up on the bar like this dude, I’ve also NEVER worked a full shift without doing a drink I invented called the Cultural Appropriation Car Bomb. It’s crazy. Sam’s an ex-baseball “pitch – er?” who’s got Bruno Mars hair and Barack Obama jeans and he somehow manages to throw his legs up all over the bar like a gymnast and bang half of his customers. Sam is the best and worst of all of us.

The plot of the first couple of seasons centers around Diane, a Salon.com writer who gets a job waiting tables at Cheers, a bar that has 2 bartenders and 2 servers on staff at all times even though it appears to serve no food. Diane has clearly read every Alan Moore graphic novel ever and talks like someone who’s constantly running their Moth Slam story on you. I’ve met her a hundred times since I’ve moved to New York. She also represents the best and worst of all of us.

The supporting cast all look like horrendous monsters and have boring working class jobs and unhappy personal lives. It’s like they’re all Snapchat face swapping with people in the live studio audience. I’ve never seen anything like them represented on television before for some strange reason. This fact rattled my mind harder than the DMT I took with Father John Brock (a Father John Misty cover artist/PokemonLARPer I met in the parking lot of Coachella this year). Why would they cast such ugly and gloomy people on a TV show that was supposed to serve as entertainment? I asked everyone I knew. I asked my chef roommate, my bar back/drug dealer, and my postal worker/bar regular but I couldn’t figure it out. It’s like if Harmony Korine was in charge of casting.

First off in the supporting roles you’ve got Norm. Every time Norm enters the bar everyone Damn Daniel’s him in unison. It’s amazing and heart melting, like a Youtube video of a lizard that’s friends with a spider. Then there’s Coach, a character who’s basically Ralph Nader post politics: senile, still kind of dressed like a Best Buy Geek Squad employee, and full of misguided rage. Then there’s Cliff, a mailman who drinks in his retro Postal Service uniform like he’s in OK Go and has the haircut of the guy on the Pringle’s can. The cast of the first season rounds out with Carla Tortelli, a salty waitress played by Rhea Pearlman, whose name is a great mnemonic device for how to spell “diarrhea” (it’s one part “diary,” one part “Rhea Pearlman”). Carla slays me. She talks like an Animaniacs cartoon and roasts everyone on the show constantly. If you wore the wrong shoes in front of Carla she would “what are those” you in an instant. Later on, Cheers introduces Frasier, who I have covered extensively, and Marty from True Detective Season One. The whole gang is like an Expendables team of Bostonians with huge jaws.

Cheers is a bar that doesn’t have an AC/DC Pinball machine or giant Jenga. It’s not full of twenty-somethings with Never Ending Story tattoos. Sam never makes Negronis or pickle backs. There isn’t an alt-comedy open mic at Cheers. I’ve never been to a place like this in my life. It looks like someone took one of those “busted up on purpose” Bushwick bars and took all the tacky crap off the walls and was just left with some sort of strange wooden room that sells alcohol. The characters that drink at Cheers come from different walks of life. Affluent, academic Diane somehow forges a relationship with Sam the Men’s Rights bro dude. Frasier, the intense steampunk high functioning spectrum case somehow wins over his mortal enemies: people with fun personalities.

Bernie is over. It’s enough to keep you from getting out of bed for an entire Sunday. If you’re feeling Bernt out you should watch Cheers.  You watch this show for 8 straight hours and you think “If the people that work and drink at Cheers can overcome their crippling alcoholism, personal limitations, and unacceptable haircuts in order to get by, maybe I can too.” 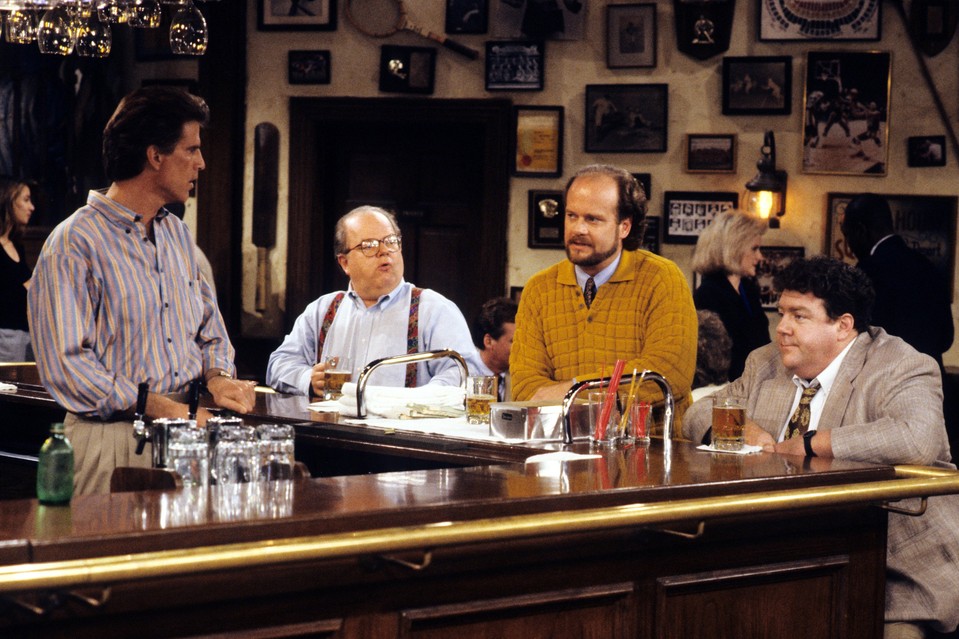