Previously on “A Quick Word From”….

When people ask me what I do, I sometimes say I work in “race item management,” but the truth is I’m just a banana peeler. I am Brian, the Koopa Troopa who peels hundreds of bananas before each Mario Kart race, and that’s all I’ll ever be.

I’ve been peeling bananas for Mario Kart races for about twenty-five years now. It’s easy work. I peel the bananas, and the racers use them to make each other slip. It started as a paycheck and a nice way to make sure Mario never jumped on my back. But before I knew it, one year turned to 25 and I’m like, “Jesus, Brian, when are you going to finally write that book,” you know?

Hey, don’t get me wrong, I like what I do and the people I work with, but when your day to day is peeling hundreds of bananas so a bunch of plumbers, monkeys, and dinosaurs can throw them at each other, it gets to you.

Day after day, week after week, I peel. I’m pretty good at it, but it’s grown increasingly hard to see the rewards of such menial work. Sure, every now and then someone will put a banana on that narrow bridge on DK’s Jungle Parkway, and I can think to myself, “Brian, that was you. You peeled that banana and put it in the question mark box.” More than likely though, the bananas do nothing. No racer worth their salt is hitting a banana on Moo Moo Meadows. Everyone just adjusts and goes slightly around them.

I’m not asking to be transferred to a different item. I know I have it lucky to be on banana duty. My buddy Kenny works in the mushroom-picking fields, and if he so much as touches one of those bad boys, he is flung five hundred feet forward. Or shell acquisition? Do you know how often a blue turtle dies? Hardly ever. That’s the only reason leader shells are so rare.

I wish I could say that we give all of the bananas we peel to the hungry, but we don’t. Sure, sometimes a Kong or two will stop by and cart off some bananas, but for the most part we don’t have the time or resources to get this food where it needs to go. It’s really a spectacular waste of bananas.

And it bothers me; it really does. I once asked Donkey Kong himself to look into a way to get all of these leftover bananas to Donkey Kong Island, but he just smiled and said he’ll “look into it.” Do you really think Donkey Kong eats bananas anymore? He’s gone big time with his fancy pre-race organic smoothies.

It’s hard to connect with these racers anymore. I mean, I’m working class, you know? I grew up idolizing these guys. Mario dresses like a plumber, but he’s not blue collar. He dates a princess and drives increasingly nice cars. He’s a sell-out, just like the rest of them. Between you and me, he fakes his accent.

And they act like they hate each other, but it’s all a publicity thing. Bowser straight up kidnaps Peach on the reg, but him and Mario race together and play golf like a bunch of old friends. It’s ridiculous.

I mean, Bowser designs all of his castles specifically so people can race in them. That’s weird and impractical. Where does he have dinner? They’re all a bunch of posers.

I’d be lying if I didn’t admit that the worst part of the job is that the bananas have faces. Every banana in the entire Mushroom Kingdom has two eyes and a smile, and I have to rip them apart and throw away their innards so we can use their emptied corpses to cause Luigi to careen off the side of Rainbow Road or whatever. I try to stare each banana in the face as I peel them. I owe them that much. But, normally, I look away. We all look away.

So I got to get out. I know that. I’m contributing to an arcane, ethically-questionable practice. But what will I do? Sell concessions at Wario’s stadium? Am I suddenly going to be one of the guys who drives buses in circles on Toad Turnpike? No. This is all I’ve ever known. I peel bananas.

And sure, maybe one day I’ll finally snap and quit. Go home and finally write The Great Mushroom Kingdom Novel. Spend the rest of my days on Koopa Troopa Beach, chronicling the life and feelings of a background character in a Mario world. Maybe I could get published and finally change the way things are run around here.

But no. I know I won’t quit. I don’t have enough gold coins for that.

Dennis Flynn is a writer and comedian living in New York City. He can be reached on Twitter @DFlyAwayHome and li.st at @dfly. 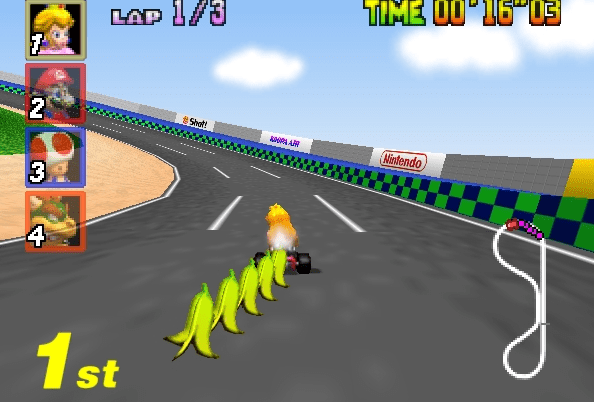 Filed Under: Entertainment, A Quick Word From, nintendo, Mario Kart