Flight delayed due to superpowers. Marvel

Hello, my name is Marcus Kelley, and I really don’t want to complain. I fly quite a bit for work, and I totally understand how fickle air travel can be. One time I had a three-day layover in Bangkok due to some sort of signal problem. Things happen. I get that. It’s just slightly frustrating to me that my flight out of the Leipzig/Halle airport has been delayed indefinitely due to an all-out superhero melee.

Don’t get me wrong; I love superheroes just as much as the next guy. I mean, really, thank you to any and all superheroes who may be reading this. You’re the real heroes, truly. It’s just that I had a two-hour window to make a connecting flight back to New York from Vienna so I could attend my son’s graduation from Columbia. There is absolutely no way I am making that connecting flight now, and James is only going to graduate med school once, you know?

When I heard the airport was getting evacuated, I was impressed with the speed and efficiency of the Leipzig/Halle security team. When I found out we were being evacuated not because of a terrorist threat, but because a group of super powered friends were having an ideological tiff, I must admit, I became slightly upset. I really don’t want to get political here, and with all my travelling, I haven’t had time to develop an opinion on whatever it is the Sokova Accords are. Captain America and Iron Man both seem like stand-up guys, and I understand that friends fight. One time I didn’t talk to my brother for a year because of a minor squabble over our father’s estate (long story short, there was a condo in Fort Lauderdale that he wanted to sell, but I thought we should keep it in the family because of how much dad liked it when all the grandchildren were together). We talked it out, and now we rent it out except for the first two weeks in August, which we reserve for the kids. I honestly don’t think we’ve ever been closer. The point is we talked it out.

Now I’m sure Captain America and Iron Man tried to find a peaceful alternative, and I do appreciate them fighting in an abandoned airport instead of a crowded city. But when I heard they were fighting, I assumed it was aliens again or another evil robot man. No, this time it was a personal problem. And that’s where bar rules come into effect: if you need to fight, take it outside. We are in Germany. There’s lots of rolling hills perfect for fighting. They could knock each other into windmills and stuff. It’d be fun.

And that’s another thing. By all accounts, the airport brawl was a little too casual and fun. If you have to fight and ruin a lot of people’s travel plans, please don’t show off what a great time you are having doing it. Show some remorse, Spider-Man. Things between my son and I are already shaky, and I just know he will see this as yet another time dad prioritized work over family. From what I can tell, almost all of you superheroes have some sort of daddy issues, so you understand how important it is that I make this right.

I promised myself I wouldn’t get angry about this, because it’s like, “first world problems. Look at this guy complaining about his missed flight.” But Ant-Man, a superhero famous for shrinking, somehow became a giant and ripped the wing off my airplane. I didn’t even know he had that power. How’s that fair?

Also, to be perfectly honest, I’m concerned that Hertz is going to charge me for the rental car that Scarlet Witch threw on Iron Man. I had already returned it to the lot, even if I hadn’t formally checked out yet.

So now I’m stuck in East Germany because The Vision sliced an airport hanger in half with his forehead beam. I know there’s been a lot of talk in the news about the collateral damage of superhero fights, and relatively speaking, this seems like an almost purposefully safe response to that backlash. But it’s still annoying. Most of these guys can fly. Why do they need an airport? If I had Falcon’s wings, I would fly clear across the ocean to let my son know I’m proud of him and I support his relationship with Denise, even if I think she’s all sorts of wrong for him.

Now I’m stuck staring at this departures board, with every single flight delayed as they clean up a bunch of exploded trucks and a weird amount of webbing. I hope Captain America and Iron Man and whoever Black Panther is find peace. I really do, but there are only so many magazines I can browse through in this Hudson News. Son, if you are reading this, I will miss your graduation, but should make it home in time for your birthday on Thursday, assuming The Winter Soldier stops fluctuating between good and evil.

Dennis Flynn is a writer and comedian living in New York City. He can be reached on Twitter @DFlyAwayHome and li.st at @dfly. 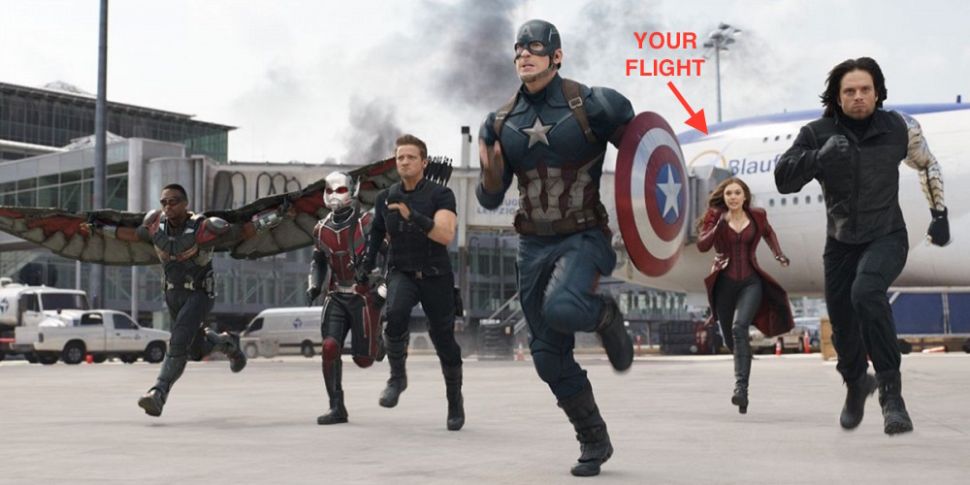