A few years back I ran into Gary Johnson, formerly the Republican governor of New Mexico from 1995 to 2003, when he came to sign up for the New Hampshire primary in 2012. He carried the Libertarian standard in 2012 and won 1,275,971 votes. He is running again in 2016. He got my vote then and will have it again. I made a comparison then to American car culture in the late 1950s and early 1960s when most everyone was either a Ford guy or a Chevy guy. And today, the Democrats and Republicans, nostalgically reaching back to old families instead of looking forward, continue to bring the same monoculture to politics.

Mr. Johnson in no way suggests this moribund political culture. He instead brings the shock of the new just as the exotic Volvo Amazon did when it first arrived on our streets in New England in the early Sixties, bringing in its wake a full bore cultural revolution. And as others have said, Mr. Johnson is cool. I would even say that as coolness goes, he is the coolest politician I’ve encountered since I rode to the airport one afternoon with William F. Buckley, Jr. 20-some years ago. He has a fierce individualism that comes through direct. You could talk to this person about fixing a broke wall, repairing a chimney, or when it would be too late in the season to risk running Tuckerman’s Ravine.

But it was quite a shock this week to see him reported on in several important political sites including Drudge Report and Hot Air. Then, on Sunday morning, there he was being interviewed by George Stephanopoulos on the ABC’s Sunday morning This Week which is sure to resonate in the press as the week opens.

And in an article this past week in National Review, Gary Johnson’s Moment?, Jeremy Carl writes, “But right now I think reporters are largely missing a potentially big story right before their eyes, because Mr. Johnson could easily have a high vote ceiling in the 20 percent range. In theory, he has all of the tools to be a serious factor in the election. Whether that’s a good thing or a bad thing for conservatism, I’m not as sure.”

Both mainstream parties are based on the principle of centralized, globalized government—and have been from the beginning.

The time may be beginning to be right for Mr. Johnson and right for us, especially right for those under 30, the Millennials.

“The majority of Americans are libertarians,” says Mr. Johnson, which may be true, especially to young, intellectually engaged and open and still unformed Millennials. They might find in Mr. Johnson a better bet and a better fit for their lives as they rise to political culture than they would find in the dated philosophical roots of Vermont Democrat Bernie Sanders.

With regard to Mr. Sanders, The Atlantic writes: “He [Mr. Sanders] crushed Clinton [in the Iowa entrance poll] by an almost unimaginable six to one—84 percent to 14 percent—among voters younger than 30. For those tempted to dismiss that as just a campus craze, he also routed her by 58 percent to 37 percent among those aged 30 to 44.”

Millennials love Mr. Sanders, finding in him the wise grandfather and singular man of character; the “Grey Champion” who turns the tide for them. But they should take a look at Mr. Johnson as well, because in their young lives they should recognize that the Ford guy and the Chevy guy thinking of “right” and “left” political binaries today are historical artifacts belonging to a day long past. Mr. Johnson and other libertarians cannot really be understood in this context, but can offer fresh eyes to a new approach and a new American era.

A few establishment conservatives after the Indiana primary last Tuesday have begun a search for someone—just anyone—to take tycoon Donald Trump, now the presumed candidate, out of the driver’s seat as they head to the convention. But it is quite a reach to see a matchup of Mr. Johnson with these core establishment types.

This panic of the Bush Restoration may be a symptom that conservatives are coming to realize at long last that they have come to the end of it and are riding into the sunset. Surely the Democrats are in the same situation with Hillary Clinton. America faces today a full paradigm shift and libertarians like Mr. Johnson offer a path forward.

Mr. Johnson says, “After great deliberation, the Founders clearly based the blueprint for our government on the fundamental idea that there must be strict constraints on Federal power—an idea from which we have strayed much too far.” He believes, according to Wikipedia’s layout of his positions, “that the proper balance needs to be restored between the different branches of government,” which “includes the rights of states.”

This was the essence of the Tea Party movement before it was co opted by a few marginal establishment figures and a new and rising generation of dangerous militants. Mr. Johnson and other libertarians imply a Jeffersonian approach to government. Both mainstream parties are based on the principle of centralized, globalized government—and have been from the beginning.

Could the Bush Restoration crew find compatibility with Mr. Johnson? I doubt it. But it won’t hurt for them to talk to Mr. Johnson. Or listen to him. America is now fully immersed in a sea change that has been building for at least a decade which is certain to bring increased instability and anxiety in the near future. The change we will encounter ahead and perhaps even this year rising is conceivably the most drastic that we will have faced internally since the end of World War II. 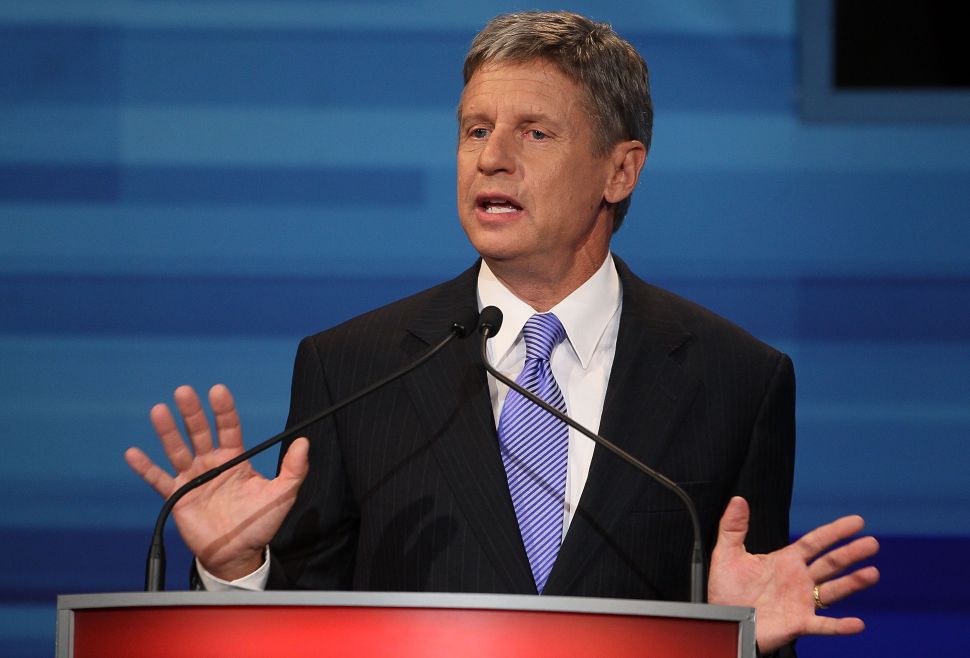