ATLANTIC CITY — Atlantic City narrowly avoided default on Monday when mayor Don Guardian wired a $1.8 million interest payment to lenders. Today’s payment is the latest in an escalating series of financial deadlines for the former gaming capital, which will have to make a an additional $7 million payment for city payroll by Friday. The news comes as the lawmakers attempt to come to a compromise on two competing bills that would have the state assume greater control over the city’s finances.

“At some point we run out of money if we can’t find a compromise,” the mayor said, conceding that the city may not be able to make its June bond payment and acknowledging that he is actively lobbying Assembly members to support a takeover bill from Assembly Speaker Vinne Prieto (D-32).

Default would have consequences for the entire state if lenders saw the state being unable to bail out a bankrupt municipality. Guardian said that he made the decision “after careful review of the City’s finances, and taking in all other debt considerations, including the bond ratings for Atlantic County and other municipalities in New Jersey as well as the effects for my city.”

An aggressive state takeover bill has already passed in the Senate with the sponsorship of Senate President Steve Sweeney (D-3) and the support of Governor Chris Christie. The rival bill goes to a vote on Thursday. Support for that bill, which would offer the city two more years of benchmarks before allowing the state to break union contracts with city workers and sell off city assets, is hovering close to the 41-vote mark needed for passage.

“But if I truly believed that a full State takeover could help save Atlantic City, I would quickly concede it as the right path to follow, and I would fully support its passage. But I don’t,” Guardian continued. “There are no checks and balances. The residents of Atlantic City will not have a seat at the table. Under a complete takeover, we would be completely shut out of the process.

“Today it’s Atlantic City, but tomorrow it could be Paterson, Jersey City, or Newark. Cities would fall like dominoes, one city after another losing its home-rule to the State government. It could even one day be Toms River, Cherry Hill, or Middle Township. When would it end?”

City Council President Marty Small also voiced his support for the Prieto bill and the time it would give the city to get its fiscal house in order.

“Any able-bodied person will know that this alternative presented by Speaker Prieto is an alternative that’s fair, that keeps Democracy, that keeps contracts in order, and gives us time to do what we need to do.”

Governor Christie, for his part, said he was unmoved by Guardian’s decision.

“What’s next? Does he want a gold medal for that?” Christie asked at his own press conference at the State House. ”Nobody should be taking a bow for making a $1.8 million debt payment.”

Christie also took a preemptive shot at any Assembly Republicans who may be considering voting for the Prieto bill. With 38 Democrats publicly on board with Prieto’s plan, a small handful of Republicans wiling to buck the governor could make all the difference.

“Republicans cannot support a bill that sets up a special master appointed by the chief justice of the Supreme Court to determine whether the benchmarks that are two years out were actually met,” Christie said. “That doesn’t sound like a very Republican idea to me.”

Prieto was quick to fire back in a statement, where he reiterated his objection to the Sweeney takeover plan’s eagerness to rework or cancel union contracts and introduce early retirement incentives.

“The continued rhetoric is tiresome. I still wait for the governor to use his existing authority or for everyone to come to the table to discuss a reasonable compromise to help Atlantic City,” Prieto wrote. “Meanwhile, I’m prepared to move forward with the bipartisan Assembly bill that would represent an effective response to helping Atlantic City while protecting civil liberties and worker rights.”

Asked about the city potentially running out of cash, Guardian said if the redirected casino funds tied to both takeover bills and additional aid from the state can reach the city in time, “there is no crisis.” 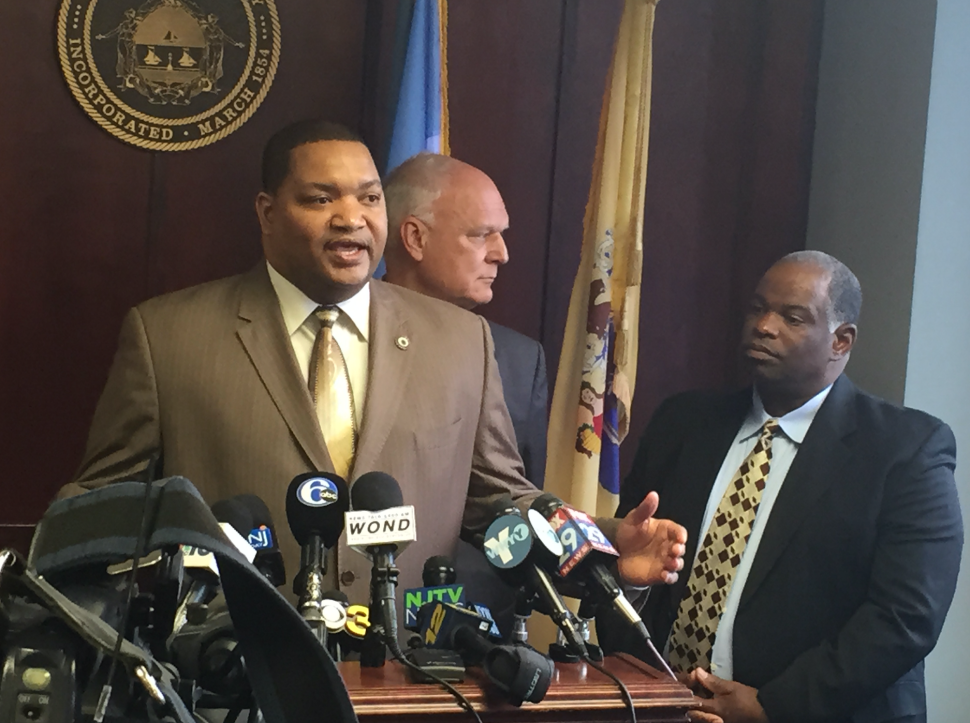