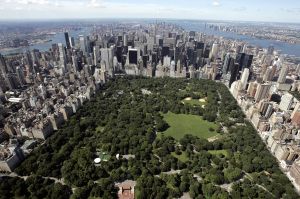 A hidden portion of Central Park closed to the public since FDR’s presidency will soon be more accessible. The four-acre peninsula, originally called the Promontory until it was renamed the Hallett Nature Sanctuary in 1986, hasn’t been open on a regular basis since the 1930s, but will be open from 2 to 5 p.m. on select days this summer. In June, it will be open three days a week, and four days a week through July and August. A $40 million project taken on by the Central Park Conservancy’s Woodlands Initiative is to thank for the change. (New York Times)

Homes that Mayor de Blasio promised would be rebuilt by the end of 2016 as part of the Build It Back Program for victims of Hurricane Sandy remain untouched several months later. Prior to last year’s anniversary of the storm on October 29, around 150 families were moved out of homes that were to be elevated or rebuilt in other ways. Sources told DNA Info the push for the program last October was “all about optics”. One source from within the program said, “We forced people out of their homes just to get fences up and make it look like there was construction going on.” (DNA Info)

A drug bust in Brooklyn found 20 kilos of cocaine stuffed in, of all things, frozen fish. The cocaine, at a street value of around $600,000, was first discovered after an air cargo shipment of the fish from Suriname was seized by customs officials at the Miami International Airport. Two alleged drug smugglers caught in the bust were identified as Triston Daniels and Troy Gonsalves, who were caught after they showed up at a warehouse in Queens where the fish was eventually transported to pick it up. (Daily News)

Liquor laws in New Jersey have remained largely unchanged since the Prohibition era. According to a WNYC study, “As of 1969, the state permits one bar or restaurant liquor license for every 3,000 residents per town”–even stricter that the liquor laws in 1947, when one license was permitted for every 1,000 residents. Despite this, the analysis found that these laws in many New Jersey cities are not followed, with 67.1% having more than one liquor license per 3,000 residents. (WNYC)

Police presence was heightened in city subways today after a person was killed in a knife attack at a German train station this morning. Police Commissioner Bill Bratton said today, “Any time we have an event, we understand exactly what happened, might it have a ripple ramification in our city.” Witnesses of the attack in Germany say they heard the man who committed the attack yell “Allahu Akbar” or “God is great”, but no extremist motivations have been confirmed by German authorities. (Daily News)