ATLANTIC CITY — Facing what he acknowledged to be a narrow path to victory during his remarks at Boardwalk Hall on Monday morning, Bernie Sanders appeared in Atlantic City to blast presumptive Republican nominee Donald Trump and get out the vote before New Jersey holds its Democratic primary on June 7. Sanders is trailing Hillary Clinton, who holds 94 percent of the total delegates she needs to seal the nomination.

Though Sanders took the occasional shot at Clinton for the finer points of her environmental record and support for a $12 rather than $15 minimum wage, Trump and the billionaire owner of Atlantic City’s Trump Taj Mahal casino were the focus of his remarks to the crowd.

Carl Icahn, who bought the Taj Mahal in 2015, drew nearly as many boos as the former reality star and his newly appointed transition team leader Chris Christie. Though Sanders steered clear of the governor in his speech, Sanders’ New Jersey campaign chairman Assemblyman John Wisniewski (D-19) was quick to recount his own role in bringing the Bridgegate scandal to light in his introductory remarks. “Chris Christie used schoolchildren as political pawns in his reelection campaign,” said Wisniewski, who uncovered the infamous smoking gun emails in which members of Christie’s administration called for “traffic problems in Fort Lee.”

“The people of this nation showed Chris Christie as much love as he showed the people of Fort Lee on that September morning,” he added of Christie’s unsuccessful presidential bid.

Icahn and workers at the Taj Mahal have been locked in bitter contract negotiations as management has cut employees’ pay, pensions and other benefits to stave off shuttering the landmark casino. Voicing his support for casino worker union Unite Here Local 54, which has endorsed the Vermont senator, Sanders zeroed in on Icahn above even Trump when tailoring his anti-inequality rhetoric for New Jersey.

“You don’t think he is a brilliant, successful businessman, who can bring the kind of prosperity to America that he has brought to Atlantic City? Is that your point?” Sanders said of Trump. “What workers here are fighting for is to maintain the pensions that they were promised. I stand with those workers.

“We have seen billionaires like Carl Icahn, worth $25 billion, come in here and attack the standard of living of dishwashers and maids. We are telling the Carl Icahns that that greed is not acceptable. That greed is destroying America, and you’re looking at someone who, if elected president, will take these people on.”

When Sanders addressed the frequent criticism that his promises of publicly funded healthcare and university education don’t have clear funding, he returned to Trump’s fellow real estate magnate.

Sanders, Wisniewski, and even city councilman Moisse Delgado eschewed any talk of the ongoing Atlantic City takeover effort, though Delgado too roused up a chorus of boos with Christie’s name. Though Sanders boasted of polls that he said show him beating Trump by double digits, he allowed that his path to the nomination is going to be a tougher row to hoe than some would have predicted months ago. After defeating Clinton in Indiana after big losses in the northeast, only uphill victories in delegate-dense states like New Jersey can give him a fighting chance in the last nine primaries.

“If we do well here, and if we do well in California, we think we have a good chance… who knows what happens,” Sanders said. “We’re not prepared to do that unless we have a — I use the word — ‘yuge’ voter turnout.” 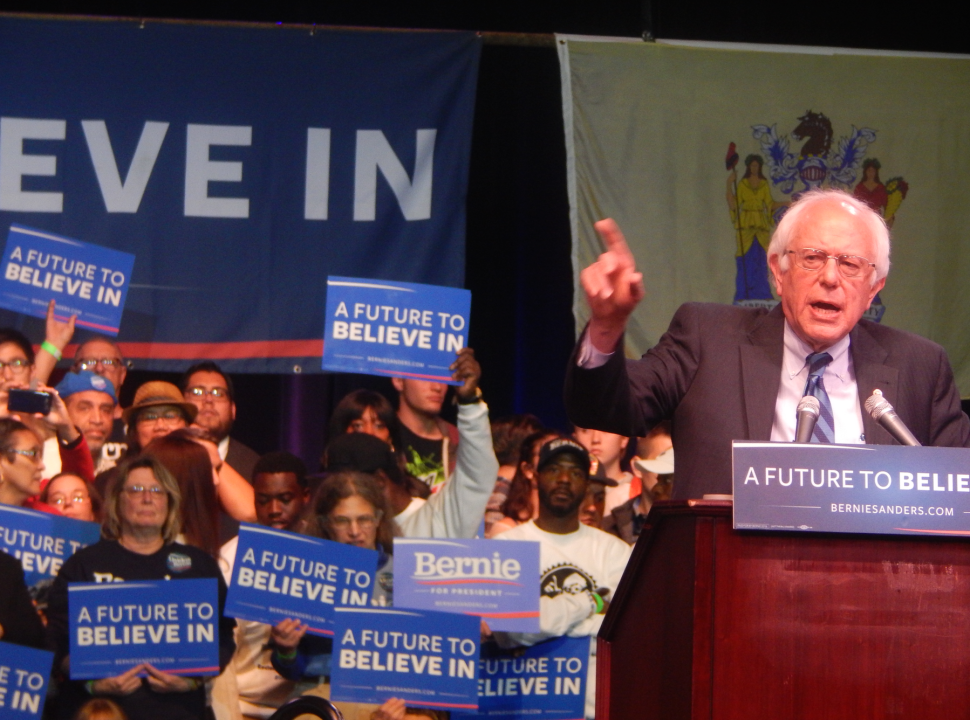