On May 9, 2015, a new addition to the traditional display of Russia’s military might was revealed. For the first time ever in Moscow’s Victory Day Parade, the RS-24 Yars thermonuclear intercontinental ballistic missile (or, to NATO, the SS-27 Mod 2) was flaunted to thousands of guests in the Red Square and to millions of Russian TV viewers.

The mighty mobile launcher—at 23 meters long, 3.5 meters wide, and weighing 120 tons—again glided elegantly along the walls of the old Kremlin in this year’s parade. To move it, an 800 horsepower (26-cylinder) engine, which consumes 200 liters of gas every 100 kilometers, was needed.

The nuclear beast’s message was breathtakingly clear—yet still, the Kremlin felt, it should be injected straight to the heart of those believing the parade was no more than a demonstration of Russia’s technical advancement and intellectual power.

During his May 13 meeting with both the members of the Russian Ministry of Defense and the top representatives of the military-industrial complex, Vladimir Putin pointed out that the development of the NATO anti-missile system continued—despite the absence of nuclear threat from Iran admitted by all sides.

“Let’s recall that just some years ago every one of our opponents, in one voice, was saying that the anti-missile system was needed to our partners in the West, in Europe and in the U.S., for preventing the missile and nuclear threats from Iran. Where are these nuclear threats from Iran now?” the Russian president asked. “There are none. But the construction of the anti-missile system still is going on.”

He continued: “And if, pulling their strings in international media, they still confuse some people—saying it does not threaten Russia, saying it is exclusively a defense system—then the people who are present here, around this table, at this meeting, cannot be confused. They believe nothing of this kind. These are not defense systems. This is the nuclear strategy of the US, brought into the periphery.”

‘What we are working on now exceeds everything imaginable and unimaginable for 20 years to come.’

Then, visibly trying to control his fury, Mr. Putin swore to “put an end to the threats” that Russia would face after the deployment of the U.S. anti-missile defense shield in Romania and Poland—meaning from now on he wouldn’t pay a kopeck for the real estate in the areas surrounding the system’s deployment.

Hosting the leaders of the five Nordic states at the White House that same day, President Obama explained: “We will be maintaining ongoing dialogue and seek cooperation with Russia, but we also want to make sure that we are prepared and strong, and we want to encourage Russia to keep its military activities in full compliance with international obligations.”

“We are united in our concern about Russia’s growing aggressive military presence and posture in the Baltic-Nordic region,” he later added.

On Sunday night, May 15, the Vesti Nedeli (“News of the Week”)—a top-rated Russian news program that many consider to be the Kremlin’s mouthpiece—considered it necessary to return to the topic of the Victory Day parade that had taken place a week before. An extensive report on the Yars intercontinental ballistic missile followed, explaining (to those who still didn’t get it) the full meaning of the demonstration of the mighty beast on the Red Square. In so many words, News of the Week explained who, exactly, should lose sleep.

“RS-24 Yars complexes are the foundation of the Russian mobile nuclear forces”, the report started. “They are easily transported—today they are on parade in Moscow, tomorrow they will be far away from the Russian capital. One of the most destructive weapons in the history of mankind—Yars produces a complex of inferiority in any of anti-missile systems. It is not possible to intercept this intercontinental missile—its speed at the start of the launch is eight km per second, and it flies not by a parabola path but constantly changes its trajectory. An anti-missile system simply doesn’t understand at what point it should intercept the missile. Plus, at the proper moment, it releases four separate warheads that fly into their targets at supersonic speed, covering a distance of 11,000 km (6,800 miles) in 20 minutes.”

At this point, a map of the world is displayed on the screen, conveniently showing the range of the missile—spanning from Russia to the West coast of America.

“Its explosive might—300 kilotons—is 20 times greater than the bomb dropped on Hiroshima,” the report continued. “Around half of the Russian nuclear defense regiments have Yars mobile launchers today. This figure will increase to 70 percent by 2018 and to 100 percent by 2020.”

The RS-24 Yars was designed by the Moscow Institute of Thermal Technology (Corporation MIT) where several other Russian advanced ballistic missiles—like RSM-56 Bulava, currently deployed on Russian submarines—were invented. According to Vladimir Grebenkin, the Institute’s former deputy director, they have “SUPER” good cadres of inventors, pointedly stressing the adverb. The tradition of designing high-quality mass murder weapons will be continued, he added—about 30 percent of the Institute’s employees are under the age of 35.

The Institute’s research has recently been highlighted by Russians in Syria:

To some, the RS-24 Yars is known as “Solomonov’s nuclear missile”—named after its inventor, Yury Solomonov.

“Remarkable, that on one of his office walls there is a map of the United States,” the reporter shared his surprise.

“The United States of America was an explicit and implicit opponent of the Soviet Union,” the 70-year-old Mr. Solomonov explained to the reporter, displaying a Star of the Hero of the Labor of the Russian Federation on his chest. “The United States, from the point of its territorial position, has not changed its location on the geographical map and because of this, the map continues to fulfill its informative function so we won’t forget where the United States is.”

On the opposite wall there is a map of Russia and, between the two walls, a board with the formulas Mr. Solomonov analyzes.

“What we are working on now exceeds everything imaginable and unimaginable for 20 years to come,” the father of Yars complex said.

He did not allow the reporter to film the formulas. 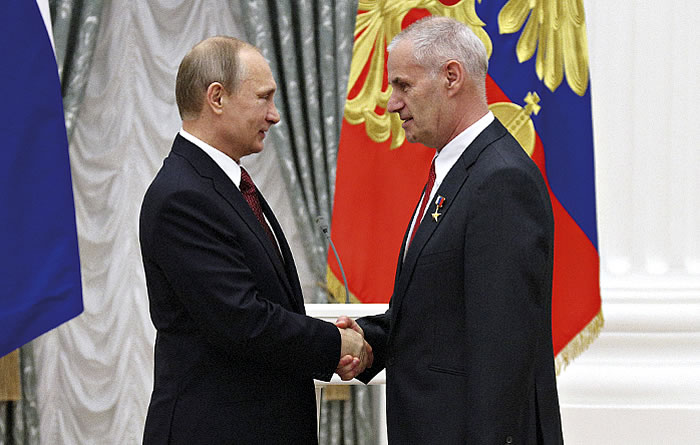