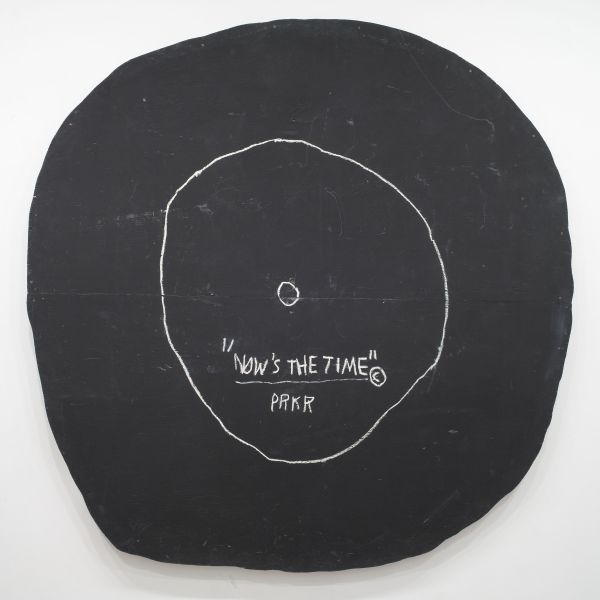 In an era of test-marketed content and outreach surveys, it’s perhaps not surprising that something as intimate and personal as poetry has come back into fashion. The wild popularity of poets like Eileen Myles and Claudia Rankine these days is testament to that.

Connectivity is key in any art form—whether you’re a poet, painter or musician—and few artists have touched as many people around the world as Jean-Michel Basquiat. But should we consider the “radiant child,” whose paintings now regularly see eight-figure price tags at auction, as much a poet, or even a musician, as he was a painter?

The heralded artist’s way with phrases, words and even letters (and their myriad buried meanings) is the focus of a new show titled “Words Are All We Have,” a dazzling collection of major works from throughout Basquiat’s all-too-brief career (the artist died of a drug overdose at the age of 27) that opens tonight at Nahmad Contemporary at 980 Madison Avenue on the Upper East Side.

While the show’s curator Dieter Buchhart by no means intends to downplay Basquiat’s importance as a painter—this is, after all, a “painting” show flush with electrifying color and a completely different animal than Mr. Buchhart’s show at the Brooklyn Museum last April titled “Basquiat: The Unknown Notebooks”—he does hope to enlighten the late artist’s fans as to just how invested this artist was in all forms of writing.

“In ‘Words Are All We Have’ we demonstrate for the first time the major importance of words, numbers and phrases in [Basquiat’s] large scale art works,” Mr. Buchhart told the Observer. “While the notebook show focused on his notebooks—which are not sketchbooks in the classical sense yet can be attributed an artistic status all their own—this show presents major works and masterpieces by the artist, making clear that Basquiat’s art is conceptual. All his work circulated around the words and the line.” 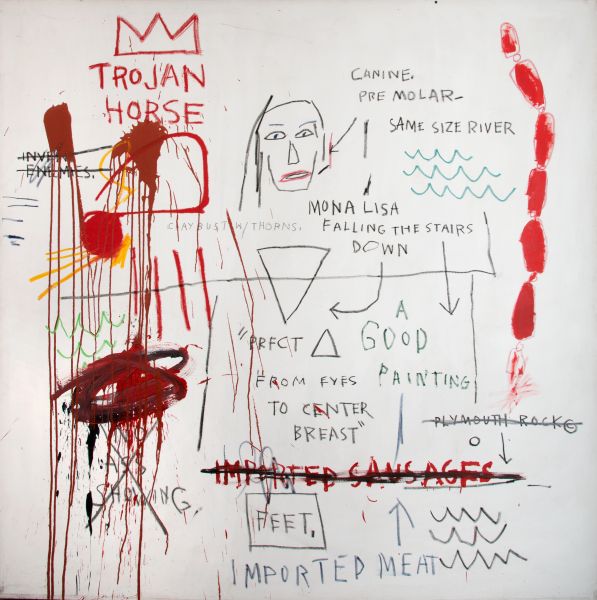 We all know that Basquiat began as a graffiti artist—he could often be found tagging downtown New York in the late ‘70s—but few realize his tag SAMO© was a collaboration with friend Al Diaz that the two developed in high school.

Aside from writing graffiti, Basquiat was also a practicing musician during these early years (his most notable work was in the noise band GRAY), but he happened to be a very well-read one. It’s been documented in books such as Basquiat: A Quick Killing in Art by Phoebe Hoban that he was a huge fan of bad-boy poets like William S. Burroughs and Jack Kerouac, and that he knew and loved the work of Concrete Poets like Apollinaire and John Cage—artists that relished in blurring the lines between writing and the plastic arts and whose work would influence the young artist immeasurably.

When Basquiat did start making artworks, they mostly consisted of found materials emblazoned with a mix of words and symbols, as in his 1982 homage to the jazz great Charlie Parker, CPRKR, one of the earliest works in the show. Basquiat’s poetic instinct was confirmed by his friend and fellow poet René Ricard, who stated in the catalog for Basquiat’s 1992 Whitney retrospective that:

“This earliest period consisted of images reduced to symbols, reduced in the sense of concentrated to an essence, similar to the way Jean had used words.”

In these early works, simplified symbols like a crown, cross, eye or ladder would commingle with sundry words and letters similar to the way we text shortened words and symbols to each other on our phones today. While the paintings got larger and the images more elaborate as Basquiat progressed, his work never lost its reckless disregard for the border that seems to separate art and writing. 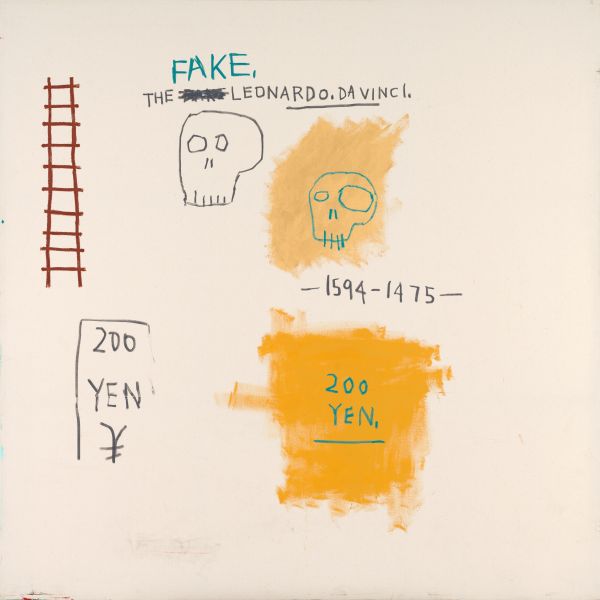 In fact, his words and the associative actions that accompany them (such as his propensity to cross out or overpaint words) became the main body of painted marks in canvases like Five Fish Species, where a chain of letters (the Superman “S” repeated and crossed out) creates a red, quasi-geometric border on the lower part of the central panel. Elsewhere, the word TIMESSQUARE is repeatedly featured on black bars—first in white lettering, then again in white and doubled in yellow (with bright blue paint obscuring some of the yellow letters). These scrawls are not only chances for the artist to play with an inversion of white-on-black-on-white paint while creating an alternating pattern of bright blue and yellow, it’s also a venue to poetically ruminate on the accidentally metaphysical name of one of New York’s (then-)seedier neighborhoods.

The repetition and pattern in Basquiat’s paintings and their similarity to the layered rhythms and repeated stanzas in music is too obvious to be ignored. Musicians that were his contemporaries, like one of the progenitors of rap music, Fab 5 Freddy, made this connection immediately, stating that “if you read the canvases out loud to yourself, the repetition, the rhythm, you can hear Jean-Michel thinking.”

And today Basquiat is known as a hero to many musicians, most notably rappers Jay Z and Kanye West. His important role in helping to define the idea of a contemporary African-American artist aside, this can be attributed to the almost lyric arrangements of his writing; his aforementioned editing techniques; his use of appropriation and his improvisational, multilayered, multimedia approach (which closely resembles the early sampling techniques he often applied to his own music). Painting isn’t music, of course, but Basquiat’s wordplay often mirrored the construction of pop and rap songs as much as it did developments in the world of contemporary poetry.

Alongside contemporary musicians, young poets like Greg Tate (who contributed a piece to the exhibition catalogue) cite Basquiat as an influence as important as any traditional poet, and his impact on young painters is far too immense to cover here. That being said, we wouldn’t have artists as varied as Rashid Johnson and KAWS without the legacy of Basquiat. 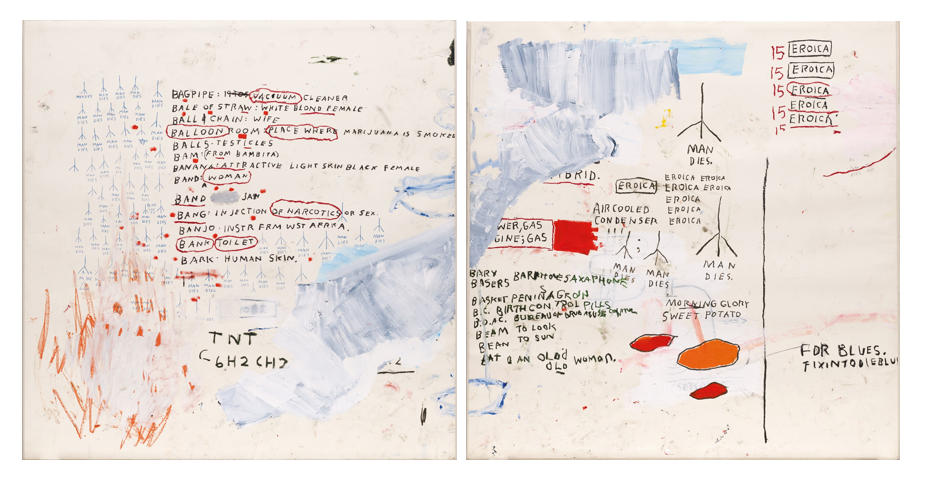 On one hand, it seems almost counterintuitive to display only one part (the paintings) of this profound artist’s all-inclusive output, but on the other, it stands as proof that Basquiat’s deep, almost supernatural, understanding of language influenced even his most painterly and canonical works, like the massive works on paper Eroica I and II from 1988, a diptych that was purported to be one of the artist’s last paintings and a magnum opus on the scale of even the biggest and best Cy Twombly masterpieces.

Basquiat was never limited in any form of media, and it would’ve been fascinating to see what he would’ve done with today’s computer and information technology. But the impressive body of work he did leave us offers the image of an artist who had an unstoppable urge to communicate—within everything from large-scale paintings to interviews on public access television—and so many have gotten the message.