Goodbye to the urinal? In many places, a gender-neutral revolution in bathroom design is afoot.

Born in the offices of architects, the design upheaval is quieter than the noisy public debate over gender bathroom equality, but designers are clearly bending to political winds and client demand. Public space is being changed for generations to come. New designs without gender labels are already showing up around the country. The Fourth, a restaurant in New York City’s East Village, has only a single restroom, featuring three private, floor-to-ceiling stalls labeled “unisex,” three labeled “women” and one for the handicapped. All are accessed through a common door. The Fourth has no dedicated men’s room.

Other private buildings in New York that feature all-gender restrooms include the Whitney Museum, relocated to a new Renzo Piano-designed structure last year in Lower Manhattan, and the American Folk Art Museum.

Chicago has at least two prominent examples of these layouts.

“This solution”—multiperson unisex facilities—“is becoming increasingly popular in restaurant and bar settings,” David Cordell, a senior associate at the architectural firm Perkins + Will, wrote on the company’s blog in February. He expects more are coming.

Today’s restrooms should be replaced with “multiple, gender-neutral, single-occupancy bathrooms” where sinks “can be shared in a common area directly outside the toilet rooms,” Matt Nardella of architectural studio Moss Design suggested on the company’s website in November.

Unisex bathrooms are hardly a novelty. Virtually every family home in the country, and many offices, get by with shared one-room bathrooms.

Unisex bathrooms are hardly a novelty. Virtually every family home in the country, and many offices, get by with shared one-room bathrooms. But the sort of neutral, multiple-stall design seen at Fourth restaurant in Union Square is becoming more common.

“Layouts similar to this can be found all over Europe,” Nardella wrote, “and are starting to sprout in California restaurant and hospitality uses. There are even a couple examples here in Chicago.”

At a Chicago restaurant called Pastoral on Clark Street, four stalls are located in a common room with a wash area in the hallway, Nardella told American Media Institute. Moss Design created the same layout for a mixed-used high rise, the Lawrence House, under renovation on Lawrence Avenue. Neither restroom has urinals.

In the public sector, Washington, D.C., Austin, Texas, and Philadelphia have laws mandating that new or renovated buildings owned by these cities must have gender-neutral restrooms. The Christian Science Monitor says that the District of Columbia’s law has been on the books since 2006, while Philadelphia enacted its ordinance in 2013 and Austin’s was passed last year.

New York City Mayor Bill de Blasio signed an executive order in March that requires all city-owned facilities to provide restroom access “to people consistent with their gender identity.” Change has come to campus, too. New York’s Cooper Union has removed gender signs from all restrooms at the college.

Not everybody is happy about the trend. This approach goes “too far, too fast,” said George Washington University law professor John Banzhaf, because some women might be upset using the facilities in the presence of men. There is also a fear factor over the threat of physical harm while women are vulnerable and men are in close proximity.

Meanwhile, George Washington University has converted a men’s room near the law school’s moot court for simulated proceedings. The new all-gender restroom, with its three pre-existing urinals and one stall, now has a lock on the outside door, meaning only one person can use a restroom made to accommodate four.

It’s happening at the high-school level, as well. The Independent Journal reports that a San Francisco elementary school “is completely eliminating boys’ and girls’ restrooms in favor of making them all gender-neutral.” This goes beyond California’s 2013 law, which requires schools to allow students to choose the restroom that corresponds to the gender that they identify with instead of the one they were born with.

Target Corp. took the debate to a full boil when it announced in April that its facilities were open to anyone who wanted to use them. “We welcome transgender team members and guests to use the restroom or fitting room facility that corresponds with their gender identity,” Target said in a corporate statement.

The company has no plans, though, to redesign its restrooms; nor has it made an announcement about changes in signage. Target stores in the Washington area include male, female and unisex restrooms. Other businesses and institutions are taking a similar approach, either by designating all restrooms as gender neutral without signs or employing unisex signage.

“The demand for gender identification of spaces is diminishing,” David Collins, a founding member of the Preview Group who sits on the American Institute of Architects’ codes and standards committee, told the American Media Institute. “Changing rooms in retail outlets and even the stores themselves are becoming less gender dependent. Changing areas at beaches have long been gender neutral and not necessary at all in some countries.”

But opposition to the trend is not limited to conservative pockets of the country. Even crew members of Transparent, an Amazon television series in which the father figure is transgendered, admitted recently that they are uncomfortable with sharing restrooms with members of the opposite gender.

“Sources connected with the production tell us members of the crew are up in arms over the unisex bathroom on the set,” TMZ reported in April. “The beef is that men, women and transgenders can all enter as they please, making it uncomfortable for some of the crew. Women are particularly worried about walking in and seeing a dude peeing at the urinal.”

It’s hard to imagine urinals disappearing completely, for example, from sports stadiums and other large arenas.

The campaign to level the playing field for the transgendered, who have had no designated facilities of their own–and make up less than 1 percent of the population–has stirred up popular opposition in other places as well. Retired major league baseball player Lance Berkman spoke for many opponents when he said he believes that the effort to widely establish gender-neutral restrooms “will allow troubled men who claim to be women to enter women’s bathrooms, showers and locker rooms.”

Still others say the trend is creating another type of discrimination, as a result of the loss of dedicated men’s rooms. The restroom in The Fourth in New York contains no gender specifications on the outside door, but it does with the signage on individual stalls: None are for men only. According to the signs, men can use only three of the six stalls, but women can choose from any of them.

That might address a longstanding complaint from women about bathroom wait times. But facilities such as the one at The Fourth “should have at least one sign that says ‘men’ on it,” Brad Dacus, president of the Pacific Justice Institute, told American Media Institute. Dacus said he believes a private business can do as it wishes with its restrooms, but providing three stalls for one gender and three stalls for either gender comes close to recalling the “separate but equal” codes of the early 20th century.

The discrimination might also be self-selected. Writing last year in Psychology Today, Elizabeth Aura McClintock, a Notre Dame professor and gender scholar, said that she has noticed during the American Sociological Association’s annual meeting that “upon seeing the unisex restroom sign” taped over the normal signs for gender-specific facilities, “both women and men often hesitated” at the door.

“But whereas women proceeded into the restroom,” she wrote, “the majority of men turned away,” explaining that “their concerns centered on the potential for misinterpretation if they were mistakenly perceived to be watching women, and the possibility that their presence might make the women uncomfortable.”

These men might be heartened to learn that the trend toward unisex restrooms doesn’t appear to have wiped out demand for traditional gender-exclusive public facilities. It’s hard to imagine urinals disappearing completely, for example, from sports stadiums and other large arenas.

“Nothing indicates to us there will be a change” in urinal sales, and there are no expectations of a downturn, a spokesperson for American Standard Brands, a leading manufacturer of plumbing fixtures, told American Media Institute. Meanwhile, analysts at market research firm Technavio are forecasting that the global urinal market will grow at a compounded annual rate “of 6.45 percent during the period 2016-2020.” 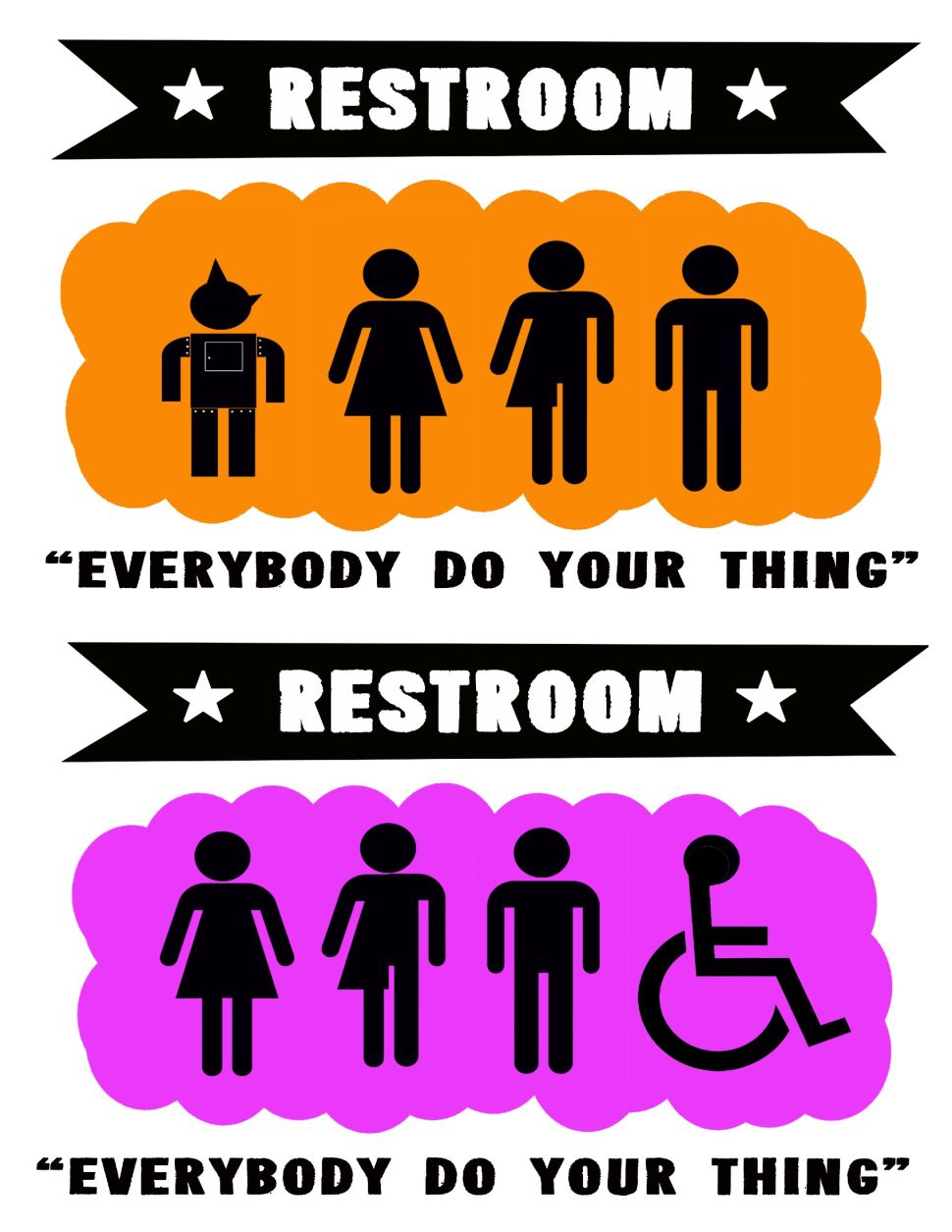