The “pivot to the center:” it’s that classic maneuver, where candidates who have spent months convincing their party they are adamant ideologues abruptly attempt to expand their appeal after they’ve locked up the nomination.

The idea of a broad centrist consensus among the American public is probably a myth: the legendary legions of self-identified “independents” in reality tend to be loyal to one party or the other, though less attached than the most devout Democrats and Republicans. But for decades, presidential nominees have deliberately blunted the rhetoric they used to galvanize their base and adopted policies seen as palatable both to general election voters and to established institutions in business, politics, the military and government.

In 2008, then-Sen. Barack Obama triumphed in the Democratic primary as a bitter critic of the Iraq war and of President George W. Bush’s intelligence-gathering apparatus, both of which his opponent and colleague Hillary Clinton had supported years before. But roughly a month ahead of his party’s convention, Mr. Obama backed a bill extending legal immunity to telecommunications companies that turned over customer information to the government, even though he had previously pledged to oppose such legislation. He also signaled he was open to softening his stance on operations in Iraq after meeting with the country’s prime minister and with American armed forces brass.

In 2012, Mitt Romney became the first GOP presidential nominee of the Tea Party era by running as a “severely conservative” and unrepentant anti-government capitalist—only to make a carefully calculated and much-discussed effort to portray himself as a moderate on economic issues in his first debate against Mr. Obama, and to play up his Rockefeller-esque record as a northeastern governor. Even a political arsonist like Donald Trump has lately made some pretense of trying to sound “presidential,” and has indicated he’s receptive to Democratic proposals on taxes and wages.

And for Ms. Clinton—the Democrats’ all-but assured November contender—the magnetism of the middle path this year isn’t just a temptation but an invitation.

“The most moderate Republicans might well cast a cross party line vote—if Clinton can convince them that she’s the more responsible steward and manager,” former Bush speechwriter David Frum argued recently in the Atlantic, suggesting the ex-secretary of state present herself as a Lyndon Johnson or Richard Nixon-style unifier of cautious, thoughtful Americans. “The Trump nomination suddenly makes imaginable an election like 1964 or 1972, in which a divisive nomination by one party propels millions of voters across the aisle to the other. But the way to win a 1964 or 1972-like victory is to move to the center, to position the winning candidate as the safe choice.”

Mark Salter, confidante of the “maverick” Republican Sen. John McCain, has already announced his support for Ms. Clinton over Mr. Trump (the senator himself, who has had to suppress several revolts within the Arizona Republican Party, has reluctantly committed to backing an anonymous character known as “the nominee”). And Clinton cohorts have reportedly started making overtures to top GOP donors, arguing she shares more of their philosophy than the belligerent billionaire.

Only one thing seems to be stopping her from executing a classic center pivot: the Vermont Sen. Bernie Sanders’ Rocky Balboa-like insistence on going the distance. At this point, a Sanders nomination would require a victory not just over the hated party establishment but over most known laws of mathematics. But the self-described democratic socialist has vowed to keep fighting all the way to the July convention.

And so, while the Trump snowball gathers mass and momentum as it rolls through the final states toward the GOP convention, Ms. Clinton is losing primaries and eking out hairsbreadth victories, and sinking funds into expensive Democratic markets like New Jersey and California. Clinton partisans have begun to panic, accusing Mr. Sanders of providing “aid and comfort” to the Republican candidate, as Brooklyn Congressman Hakeem Jeffries recently put it.

“Here’s the deal: Bernie’s not opening field offices in Ohio because he’s only focused on the primary. Donald Trump isn’t opening field offices in California because he’s only focused on the general. We’re the only ones running two races,” reads a recent appeal for cash from Marlon Marshall, Hillary for America’s director of state and political engagement.

Ms. Clinton also rolled out a proposal this month that would allow Americans of a certain age to buy into Medicare, after months of pushing back on Mr. Sanders’ claims that the Affordable Care Act was fundamentally inadequate. Though hardly a groundbreaking notion, the New York Times noted the renewed support for a public option represented a rhetorical and ideological “step to the left on healthcare.”

“That was inconceivable a year ago,” Ken Sherrill, professor emeritus of political science at Hunter College, told the Observer. “My guess is that his continuing strength, combined with what I’m sure is very good polling data, made her campaign feel it was necessary to make that move.”

Mr. Sherrill posited that Mr. Sanders has functioned as a left-wing answer to the Tea Party, bringing social democratic ideas from the extreme to the mainstream—and keeping them there.

Others agreed that Mr. Sanders’ candidacy has pushed Ms. Clinton and the Democratic Party into producing proposals popular with voters, but with weak institutional support in Congress or among donors.

“What’s ‘center?’ If you ask most people on the street if they want a higher minimum wage, most people will say ‘yes,'” said Dan Cantor, national director of the Working Families Party, a left-leaning organization that has backed the Vermont senator. “If the Sanders campaign means anything, it means that whoever is the Democratic nominee is going to run a full-throated progressive campaign.”

It’s also likely Ms. Clinton released the public option plan not just to fend off attacks from Mr. Sanders, who has blasted her as a tool of lobbyists and campaign contributors, but also to romance his voters.

“There are two ways you can view it. Either she put it out because Sanders is still is in the race, and she needs to move left. There is some pressure there,” Lis Smith, a former consultant to ex-Maryland Gov. Martin O’Malley’s short-lived White House campaign, said in an interview. “It’s also her starting to put out an olive branch to Sanders supporters.”

As of the latest tallies, Mr. Sanders has a grip on more than 43 percent of the Democratic base, some of whom Ms. Clinton might have trouble compelling to the polls come November—and some of whom, like his blue collar backers in the heartland, are targets for Mr. Trump. According to Ms. Smith, Ms. Clinton will need her left-wing rival to campaign aggressively for her after the convention.

“The leverage he has going in is something we haven’t seen before,” she said. “He maximizes it by staying in the race. He’s going to go out on a high note.”

Mr. Sherrill agreed that making rightward motions instead of rallying the party behind her could prove “fatal” for Ms. Clinton, as would failing to secure Mr. Sanders’ support in the final months of the campaign. He predicted the Democratic underdog would demand a marquee speech at the party conclave in Philadelphia, along with further policy commitments on healthcare, taxation, trade and entitlement programs.

Had the socialist senator abandoned his bid after losing New York, when Ms. Clinton’s delegate advantage became nigh-insurmountable, he would have had little ability to extract such concessions.

“She would have been polite to him, but basically, it could have been the political equivalent of swatting a fly,” the professor said. “By staying in, and by mobilizing significant numbers, he’s making sure that doesn’t happen.”

So what to expect next from Ms. Clinton, and from the post-convention edition of the Democratic platform?

So far, 2016 has been the cycle of the populist broadside. Mr. Sanders has distilled his candidacy into a few essential issues, reiterated ad nauseum: dismembering financial giants, obstructing the Trans Pacific Partnership trade agreement, eliminating public college tuition and “Medicare for all.” And, for all his vagueness, reversals and evasions, Mr. Trump’s campaign similarly centers on a handful of distinctive and striking proposals: a wall on the souther border financed by the Mexican government, mass deportations of undocumented immigrants and retaliatory tariffs deployed against countries caught stuffing sawdust into their currency.

Neither man has given up much in the way of details about how they might realize these ambitions. But they nonetheless have attracted massive crowds and thrilled millions.

Ms. Clinton, on the other hand, has mostly offered a beige version of Mr. Sanders’ program, couched in a language and philosophy of careful incrementalism—”centrist gruel,” in Ms. Smith’s words. Her campaign powwows are smaller, and the enthusiasm around her is dimmer.

“The trade issue has emerged, somewhat unexpectedly, as the dominant issue in both parties,” Mr. Cantor observed. “People are looking for bold ideas. And whether Sanders or Clinton is the nominee, it makes sense for them to continue to put forward these kind of solutions.” 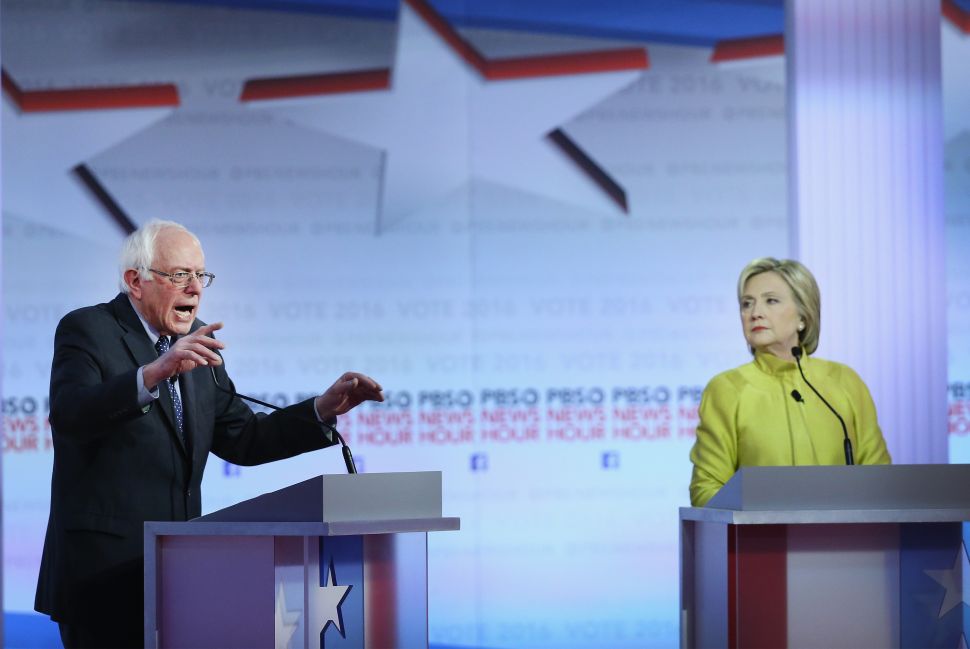