Shakespeare wrote in Julius Caesar that there is a tide in the affairs of men which, taken at the flood, leads on to fortune. The tide in the affairs of men and women today is that there is a progressive populist wave across the United States and throughout many parts of the world, embodied by the papacy of Pope Francis and the presidential campaign of Bernie Sanders.

The winner of the public battle of ideas in this historic battle that has only begun is the Democratic candidate for president who, according to the average of all polling on Real Clear Politics, would defeat Mr. Trump by an average of 13 percent—and who runs significantly stronger than Hillary Clinton against all candidates in match-up polling. That candidate is Mr. Sanders.

It is no surprise, nor should it be depressing to progressives, that the establishment will grip power until it is pried out of its cold dead hands, to paraphrase what Charlton Heston once said about his guns. For every revolution there is a counter-revolution.

It is brilliant, remarkable and amazing that up against the totality of virtually all establishments Mr. Sanders will probably reach the Democratic National Convention with at least 46 to 48 percent of all elected delegates.

When the television cameras scan across the floor of the Democratic convention viewers will see a huge number of Sanders delegates who will be cheering wildly for their champion and for other progressive leaders who will be addressing the convention, and challenging the Democratic Party to enact a platform that stands for the things that Democrats are supposed to stand for.

I will tell readers that at this moment, various private memos are circulating among Sanders staff and leading progressives about the future of Mr. Sanders and the progressive movement from the moment the convention ends until the ultimate victory for progressives that will occur when “the system” catches up with the people.

In one sense Mr. Sanders has already achieved the stature that is common in European and other parliamentary systems as the leader of the Loyal Opposition. Going forward he will challenge the Republicans and, while he will support those Democrats who stand tall for progressive values, he will challenge other Democrats who do not.

If Mr. Trump can repeatedly claim credit for his polling numbers, what does this say about Mr. Sanders, who leaves Mr. Trump behind in the distant dust of public support in poll after poll, week after week, month after month?

When Mr. Sanders addresses the Democratic National Convention it will be a speech for the ages, rousing the entire convention to its feet, sending a message of progressivism and idealism and a politics of integrity and authenticity to every corner of the nation and around the world.

When Mr. Sanders make his case against Mr. Trump at the convention and beyond he will have a moral and political credibility unmatched in American political life.

When Mr. Sanders takes his case to the people in November on behalf of the issues and ideas and values and candidates whose visions and dreams he shares he will be the single most powerful voice on the American political stage.

When Mr. Sanders continues his quest for the revolution he seeks in 2017, and 2018 and beyond, he will mobilize even more people to great causes worthy of the battle that will never end until our country becomes everything it can be.

When Mr. Sanders next brings his message to the Vatican, which he surely will in a future that is not too distant, sharing the dreams of Francis who is one of the great men on earth, which he surely is with a faith that moves the world, the bell will ring more loudly than ever.

I have long argued that the left is right and the right is wrong. Think about this: the more Mr. Sanders campaigns the more progressive Ms. Clinton becomes. And the stronger Ms. Clinton appears the more Mr. Trump will move left of where he was the day before, which is why he is already showing signs of backing off his plan to bar all Muslims from entering the United States.

The establishment may fear it; the media may ignore it; the pundits may mock it; but when we read the match-up polls that show Mr. Sanders as the strongest candidate we are reading the numbers that will ultimately shape and define the future of American politics. 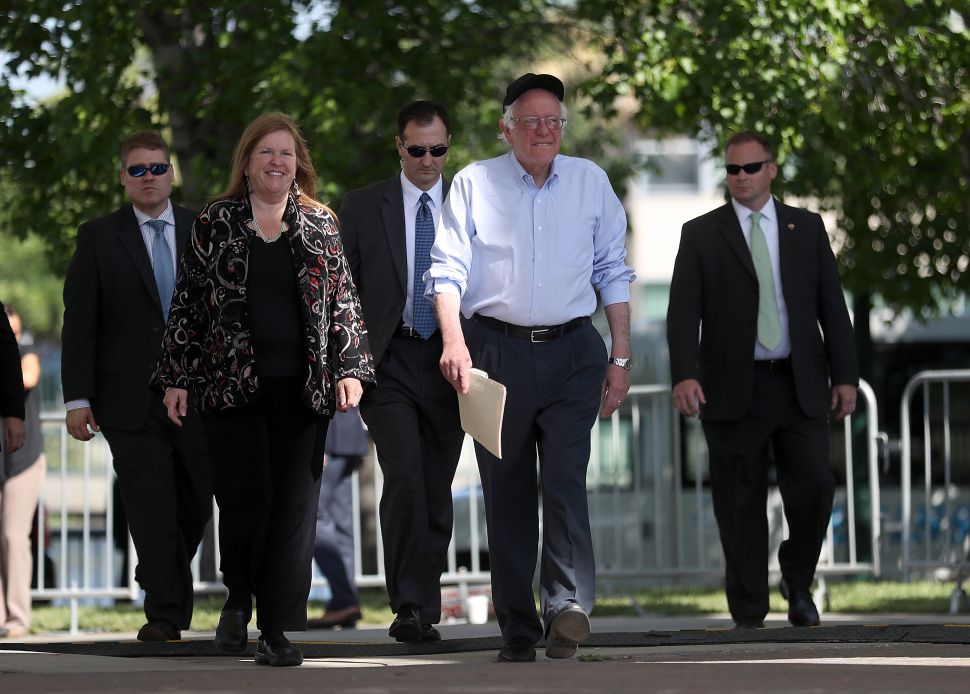