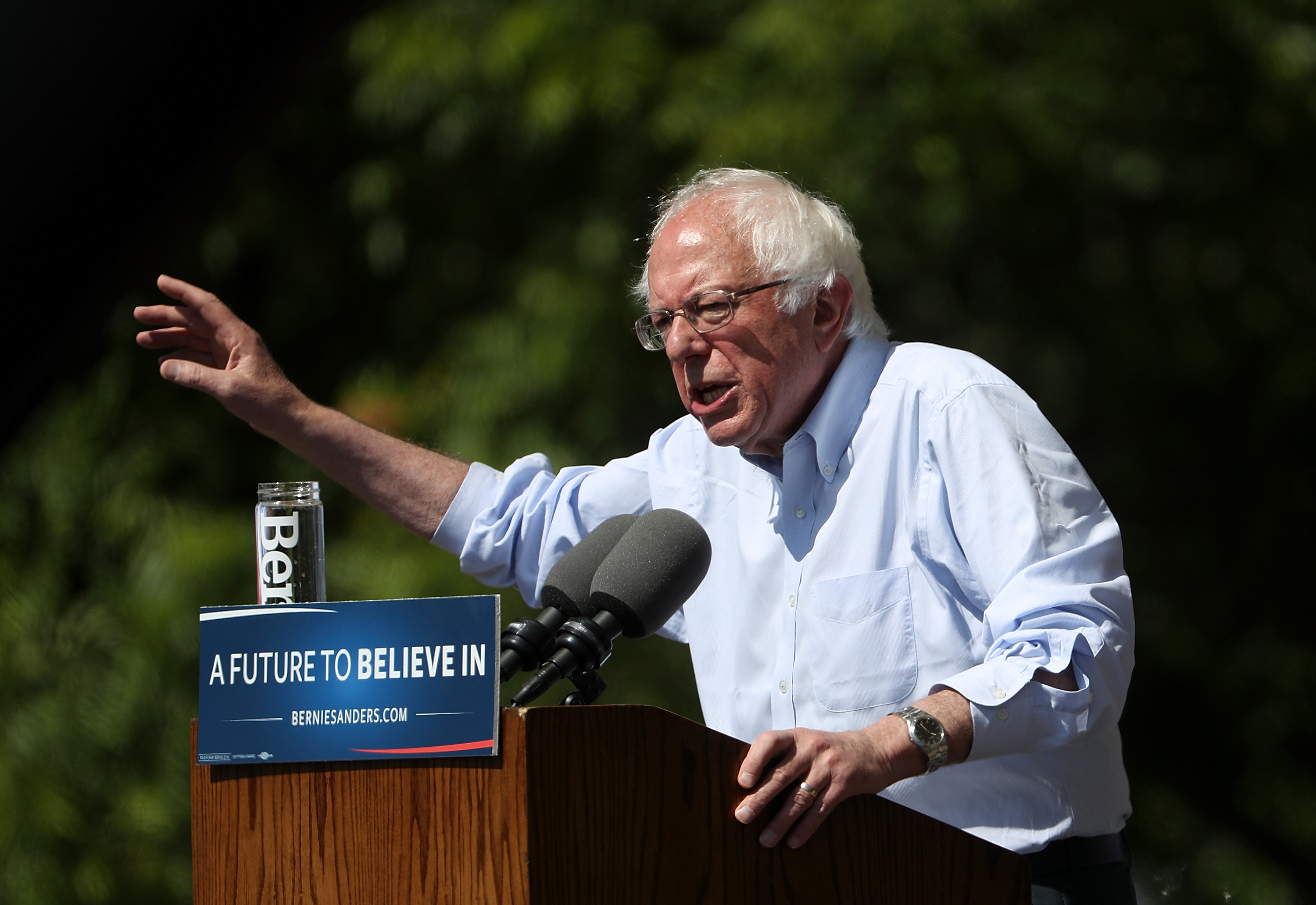 Each election has what become its accepted narratives: themes that, over time, gel into what are considered reliable facts that are no longer vetted or questioned. As the Democratic campaign finally wraps up, it’s time to put two persistent ones to bed: Hillary Clinton is unpopular and limping to a finish, and Bernie Sanders is a progressive from way outside the system.

Neither could be farther from the truth.

First, let’s set the record straight on West Virginia and Indiana. The only way each state substantively changed the narrative is that Mr. Sanders’ job is that much harder and his odds are that much longer—read: impossible—to actually catch up with Ms. Clinton. There is a huge difference between winning the headline and winning the race. Mr. Sanders has won headlines over the last two weeks. But that’s it, and to pretend otherwise is to traffic fantasy (ahem, Berners).

Ms. Clinton has not just maintained her actual lead, she’s held her competitor to low wins in the mid single digits that ensure that where it matters—which is in the delegate count—his pickups have been minute and do nothing to dent her lead or change the outcome. In order to make any meaningful changes, he needs to win remaining states, including California and New Jersey, by well upwards of 70 percent. And that ain’t gonna happen.

Plus? At face value Indiana and West Virginia should be landslides for Mr. Sanders since they are overwhelmingly white and rural, they’ve been hit hard by the rust belt decay that’s savaged Appalachia, and—bluntly—are chock full of angry working class whites, if you look at reported anecdotal evidence. So what’s with the five-point wins? Why aren’t they 15 and 20 points? That’s my question. It’s a slippery toe-hold at best. Unconvincing.

His record points to a career—with the exception of his mind boggling and shameful record on guns—as a reliable left-wing backbencher.

Second, let’s look at the overall race and break it down by the numbers: Hillary Clinton is ahead of her primary opponent by over three million votes. In the Democratic primary, she’s still ahead by about 300 pledged delegates. America knows her. Which is probably in no small part why she’s so far ahead and why the country is saying a resounding yes to her in such massive numbers.

Call it what you want, but acknowledge she’s ahead.

It’s simply inaccurate to say that a campaign putting those kinds of numbers on the board is limping. They are sprinting. Yet the theme persists it’s one dead-cat bounce after another and she should be “doing better.” But what does that mean? That she should win every state?  Even the best campaigns have good and bad days. That she should have sewn it up by now? Well, newsflash, she actually does have it sewn up by now. Every national campaign has certain good states and certain bad states. The Democratic Party, thank God, isn’t monolithic.

She’s unpopular? Well, first of all that’s sexist, as is the consistent devaluing and snide parsing of every success she has, which the media does. But tell me this: how is she unpopular? That she doesn’t draw 20,000 hipsters to a rally? Those are optics. And they don’t vote in the same number as Hillary Clinton’s core demographics (if I was running for office? I’d ignore the whole Flight of the Conchords crowd and focus on older voters, college educated whites, middle aged women, African Americans and rising new American communities including Latinos and Asians: they vote). How can somebody who, according to accepted wisdom is so unpopular, be winning by so much? Voters support their candidate because they want to. Not because they are forced to. And it’s clear by polls and votes that Hillary Clinton is vastly preferred.

Mr. Sanders, for his part, has coasted on narratives of his own making. Disestablishmentarian? Please. Of course Mr. Sanders is a member of the establishment. Mr. Sanders is about as outside the nation’s power structure as Tom Donohue. I fail to see how a man who has been a member of the two most exclusive clubs in the country—the United States House of Representatives and the United States Senate—for nearly three decades, could be anything but establishment. He lives the contemporary life of a powerful elected official. I don’t care if his shoulders need a quick brush-off. I don’t care how rumpled his suit is, or how few r’s he pronounces.

And while he may not be Jay Rockefeller or Rodney Frelinghuysen, the country hasn’t been defined by that type of Joseph Alsop clubby sort of establishment in decades. The establishment doesn’t talk like Thurston Howell today. But if you are a stalwart in the corridors of influence, and if your decisions impact millions of people, and you wield extraordinary power? That’s establishment. Bernie Sanders did not go from a life of selling fruit at intersections or that of an ascetic hermit to running for President. You can be a kvetcher, a difficult contrarian and still be in the establishment (just ask Carly Fiorina).

The idea that he has been a liberal crusader with an enviable quiver full of results is hogwash.

As for being a progressive—other than saying how progressive he is ad nauseum—frankly, I just don’t see it. Senator, you’re no Ted Kennedy. There’s no solid legislative record of liberal lawmaking; and I don’t see him leading a single movement until he decided to run for President.

His record points to a career—with the exception of his mind boggling and shameful record on guns—as a reliable left-wing backbencher. Fair enough, and we need the votes and I hope he continues that trend when he’s back in the Senate next year. Congress is full, by the hundreds, in both chambers and on both sides of the aisle, of said rank-and-file backbenchers. But the idea that he has been a liberal crusader with an enviable quiver full of results is hogwash. Voters haven’t seen Mr. Sanders out in front on healthcare, on choice, on climate change and sustainability, in a meaningful way—backed up by the decades-long track record of results that, by the way, he should have by now if he’s a serious person—any more than they’ve seen him at the Met Gala in Alexander Wang. He occupied a vague niche in the mind of the American public until about ten political minutes ago.

But the main reason he falls so painfully short as a progressive is that he continues to refuse to do what will ensure that a progressive vision of 21st century governance wins this November. This is not US Uncut: Bernie Sanders has no path to victory, yet he continues to run a nasty race of smears and character assassinations against Hillary Clinton—the all-but victor and liberal standard-bearer who doesn’t just have a progressive vision, but has a way to make it real.

And, what’s more, he continues to stand by while his supporters descend into brainless, furious chaos and refuses to call out their destructive and thoroughly offensive tactics. With each passing day, while Ms. Clinton is miles ahead in the metrics that matter, she still needs to deal with a mosquito buzzing persistently in her ear that just won’t go away. She still needs to compete with Mr. Sanders, far after she should have to. And fighting on two fronts is distracting and expensive.

She’s now announced she’s advertising in Kentucky. If Mr. Sanders makes her spend money in New York and Philadelphia (in order to go up on the airwaves in New Jersey, whose primary is approaching) and in the eight or so stratospherically costly media markets that make up California, then she actually is in danger of limping across the finish line due to resource depletion—while Donald Trump sits on his billions and licks his chops. Forcing her to do that is a kamikaze move to the progressive movement. While I know Mr. Sanders thinks money is a theoretic evil spirit made out of bad ideas and impure thoughts, you still need it to win campaigns.

Let’s be clear: Donald Trump has no obstacle to the nomination. And while he’s distracted this week trading sophomoric bitch-slaps with Paul Ryan, the Bushes pere-et-fils, Lindsey Graham, and the donor and DC-based lobbyist class, he is one hundred percent free and clear to focus his fire on Hillary Clinton. Hillary Clinton needs be as focused on Donald Trump in order to emerge victorious. And Bernie Sanders should care about that. I hope somebody is asking him why he doesn’t seem to. 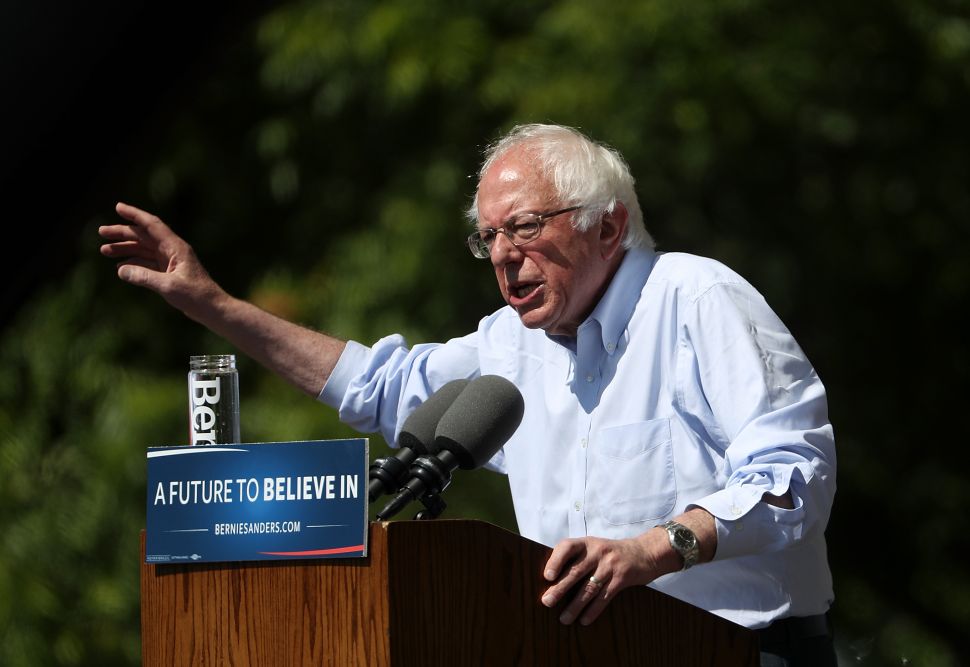