The graduating class of 2016 made it official last week when countless students donned their mortarboards and gowns, claimed their pleather-bound diplomas and a handshake from the elders at the podium when their names were called and took their first step into a world of uncertain opportunity and employment in the great, big, beautiful tomorrow.

At the venerable Manhattan School of Music’s 90th commencement on Friday, held inside the soaring Gothic nave of Riverside Church, the ceremony was distinguished from the usual academic proceedings first of all by the inclusion of several gorgeous musical interludes (Kreisler, Handel, Richard Rodgers), performed by young master’s and bachelor’s degree students clearly of professional caliber. And then, finally, the procession of graduates reached the back of the vast chapel, where a 47-year-old man in the W-Z contingent had been waiting a long time in his purple gown and gold-tasseled mortarboard for his name to be announced: Former batting champion of the American League, four-time World Series winner, five-time All-Star and for 16 years the New York Yankees centerfielder—and now MSM ‘16 bachelor of jazz composition degree-holder, Bernabé (Bernie) Williams.

‘It was a little unusual at first, going to classes with people my daughters’ ages,’—Bernie Williams

Two days earlier, Bernie Williams had already primed himself for this moment by playing in a jazz combo with other MSM graduates at the school’s Gala benefit, held inside the Rainbow Room. At the afternoon sound check of Art Blakey’s spiritual-and-blues tinged “Moanin’,” Mr. Williams sat stage right, leaving the visual focus to two younger members of the sextet, who possessed more energy and hair. Mr. Williams sat quietly with his head down, holding his John Suhr custom-made guitar close to his body the way he once held a 34-and-a-half-inch, 33-ounce Rawlings bat, and then expertly used his good ear where once his good eye led him to success.

“Having someone of his stature at the school energizes the whole student body,” flutist Elena Pinderhughes (BM ‘17) said during a break. “He’s been in my classes for about two years. His work ethic is great. He’s awesome.”

When it was mentioned how Mr. Williams carries himself with an air of humility, despite having released two albums (one earned a Latin Grammy nomination) before deciding to study music at this level, vibraphonist Stefon Harris (BM ‘95, MM ‘97) concurred.

“Humility is a sign of greatness,” Mr. Harris said, nodding in Mr. Williams’ direction, as Bernie was affably answering similar questions from different TV sports camera crews. “You know, when you sign onto this art form you recognize that you’re part of a legacy of greatness that’s always going to include someone greater than you. It doesn’t surprise me,” the young vibraphonist went on, “to find a pro athlete finding a home in jazz. It’s unpredictable—you have to think on your feet, and reacting to what’s happening is a significant attribute of a jazz player.”

When the Observer met Mr. Williams, he seemed remarkably relaxed. To hear him tell it, this degree has been years in the making, ever since he graduated from Escuela Libre de Musica, Puerto Rico’s equivalent of LaGuardia High School. “My mother is an educator, has been for 40 years, and I promised her,” he said of his attaining a formal degree. “It was a little unusual at first, going to classes with people my daughters’ ages, but I came to realize, these kids have been playing and training since they were 3 or 4. They run laps around me, so I had plenty to learn from them. And I needed to show them I was not there to waste my time, that I was committed to the program.”

So Mr. Williams joined a new team, so to speak, changed his routine to become a student and did what it took “to become the not the greatest but the best I can be.” He paused and then said with a smile, “It’s a four-year program—I did it in three.” 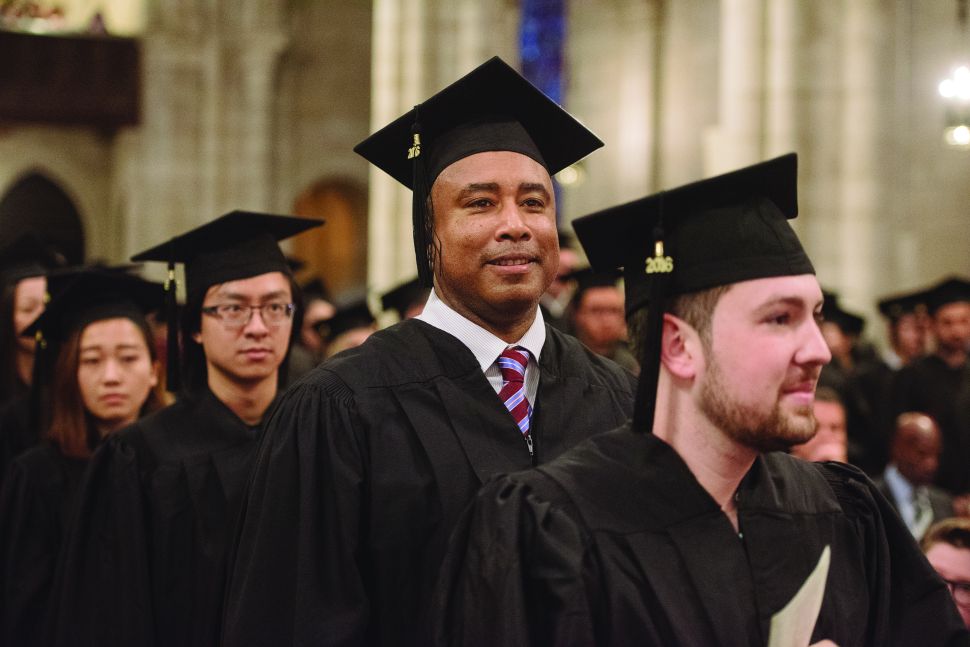