The exact role former President Bill Clinton plays in his wife’s presidential campaign is sometimes difficult to pin down. He has never excelled at keeping a low profile—it’s difficult to imagine Mr. Clinton as a retiring, camera-shy First Gentleman come January—and it’s long been obvious he’s a lot more popular with most of the Democratic base than his wife.

This explains why Hillary Clinton at times publicly offers her husband big jobs in her putative administration. Last weekend she indicated Bill would be in charge of getting our economy going again. “My husband, who I’m going to put in charge of revitalizing the economy, ’cause you know he knows how to do it,” Ms. Clinton told an audience in Kentucky. What exactly that means is subject to interpretation. Will Bill Clinton head up the new Department of the American Economy next year? How is that different from the existing Department of Commerce?

Details aside, Ms. Clinton needs all the help she can get on the campaign trail, as evidenced by her loss in Oregon and squeaker of a victory on Tuesday in Kentucky, where she beat out Senator Bernie Sanders by half a percent of Democratic voters, despite a big ad buy and a hard campaign push in the Bluegrass State, and despite the fact that she beat Barack Obama in the 2008 primary there by 35 percent. That Ms. Clinton is having considerable difficulty defeating a 74-year-old socialist who represents a state with two-tenths of a percent of the U.S. population does not bode well for her chances in November.

Therefore, Bill the political maestro is on call to help, and few can doubt that Hillary generally benefits from his public appearances, which recall for many voters a happier time—the Clinton era of the 1990s, when the economy was much better and the country overall seemed a happier and safer place than today. For the Democratic faithful, Bill Clinton is a big draw and his wife has no better one to call on.

Bill Clinton’s comments were a crass overstatement of current realities.

However, even the pros drop the ball sometimes, and Mr. Clinton created a needless controversy last Friday at a campaign stop for his wife where he raked Poland and Hungary over the coals for their alleged lack of democracy. His comments were scathing, noting the countries, both NATO allies, owe their current freedom to the United States, which defeated their Soviet occupier in the Cold War. Mr. Clinton went further, however, alleging Poland and Hungary find “democracy is too much trouble” and “want Putin-like leadership, ‘just give me an authoritarian dictatorship and keep the foreigners out’…sound familiar?”

That last line was a transparent dig at Donald Trump, whom Team Clinton has every reason to disparage right now, particularly since new polling indicates that the likely Republican nominee and Ms. Clinton are running neck-and-neck and the Democratic heir apparent will have a tough fight on her hands this fall if she wants to move back into the White House in the new year.

That said, bringing Poland and Hungary into the American political race was a bad idea. In the first place, Bill Clinton’s comments were a crass overstatement of current realities. Much to the chagrin of Western bien-pensants, both Warsaw and Budapest have been vocal opponents of the European Union move, led by German chancellor Angela Merkel, to bring millions of migrants into the EU. Poland and Hungary have committed the unpardonable sin among progressives of stating that their countries ought to remain as they are, demographically speaking, and have no need for any mass influx of migrants, particularly Muslim ones.

While Hungary, led by the provocative Viktor Orbán, has gone farther down this road than Poland—evidenced by his wall constructed last summer to stop migrant flows into his country—Warsaw has been catching up. The leadership of a new right-wing government espouses an unapologetic view that Poland doesn’t need the sanctimonious counsel of Western progressives to thrive.

To be blunt, Hungary doesn’t matter all that much to the United States. Budapest has a tiny military and a safe geostrategic position, while his flirtations with Vladimir Putin in no way mean Prime Minister Orbán seeks to end his country’s membership in NATO or the EU: quite the contrary. Neither are there all that many Hungarians in America, so Budapest’s impact on our politics is slight.

The same cannot be said for Poland. That country, with nearly four times the population of Hungary and a commensurately larger economy, matters a great deal to both NATO and the EU. Moreover, it’s a frontline state in our budding Cold War 2.0 with a revanchist Russia, and it’s no exaggeration to state that NATO’s increasingly tenuous position in Eastern Europe depends on Polish willingness to deter Kremlin aggression.

Why Bill Clinton would seek to needlessly offend Warsaw is a good question.

Fortunately for the Atlantic Alliance, Poland is very serious about that Russian threat—despite the Obama administration’s repeated insults to Warsaw—and the Polish military is the bulwark of NATO readiness and deterrence in Eastern Europe. No less, Warsaw has been our faithful ally since the end of Communism, punching far above its weight in American-led military ventures across the globe. Poland’s contributions to our wars in Iraq and Afghanistan were militarily significant, unlike most of our allies, who were content to send token, show-the-flag forces that largely avoided combat. Not so the Poles.

Then there’s the fact that Poland, virtually alone among NATO members, spends the “required” two percent of GDP on defense (Estonia is another outlier, as I recently explained). Simply put, the Atlantic Alliance would be in far better shape if all its members took military matters as seriously as Warsaw does. Poland, then, is an almost ideal ally for America, giving as much as it gets in terms of collective security. Why Bill Clinton would seek to needlessly offend Warsaw is a good question.

The Poles are hardly taking Team Clinton’s insults lying down. Beata Szydło, the prime minister, demanded an apology for Mr. Clinton’s “coarse words” about her country, which she termed “unjustified and simply unfair,” while Jarosław Kaczyński, leader of the ruling Law and Justice party, suggested that the former president had lost his marbles: “If someone believes that there is no democracy in Poland, they should be medically examined.” More diplomatically, President Andrzej Duda stated Mr. Clinton was “grossly misled” about his country.

Polish hard feelings regarding Mr. Clinton’s comments aren’t difficult to decipher. In the first place, the statement that any Polish government wants to emulate Russia in any way seems calculated to offend. Memories of long and brutal occupation by the Kremlin are fresh and fears of Mr. Putin run deep, in light of on-going Russian aggression against Poland’s neighbors. Poles are not much fonder of Russians than Jews are of Germans, a fact Mr. Clinton—who touts his foreign policy accomplishments in the White House—should understand.

Warsaw is likewise touchy about accusations of a lack of democracy, given how difficult it was for Poland—like all countries who spent the Cold War under Soviet occupation—to transition from Communism to multi-party democracy. To say nothing of the fact that Poles are understandably proud of their very democratic resistance to Soviet rule, embodied in the Solidarity movement that did so much to subvert what President Reagan termed the Evil Empire back in the 1980s, entirely peacefully.

Poland’s democracy is imperfect and sometimes messy, but if fragile coalitions and parliamentary name-calling are disqualifying, it’s fair to ask why Italy has been in NATO and the EU for so long. Above all, if Ms. Clinton wins in November, the United States will have been ruled by two political dynasties for 24 of the last 32 years (if she wins two terms like her husband, make that 28 of 36 years), which seems a lot more oligarchical and less democratic than anything that’s happened in Poland since 1990.

Then there’s the domestic angle to Mr. Clinton’s gaffe. There are ten million Americans of Polish background and they will be voting this November. They are no happier with the former president’s insults to their ancestral homeland than their kin back home. Not to mention that Polish Americans, accustomed to “Polack jokes,” are sensitive about slights.

It’s therefore no surprise the Polish American Congress has protested, announcing it may throw its weight in the election behind anybody not named Clinton. Many Polish Americans are exactly the kind of voters Ms. Clinton needs to win—traditionally Democratic but sometimes voting Republican, working class or one generation removed from it, and socially conservative—but were possibly leaning toward Mr. Trump anyway. President Clinton’s insults may push many of them decisively toward the GOP this fall.

Polish Americans are thick on the ground in several states Hillary Clinton will need to win in November if she plans to be our next president—including Pennsylvania, Illinois, Michigan, New York and New Jersey. While they are hardly single-issue voters, it’s safe to assume that memories of Bill Clinton’s insults will linger in the civic, cultural and religious circles where Polish Americans congregate.

One of the stranger ironies of Mr. Clinton’s comment about Poland becoming Putin-like is that Warsaw has done more than any country in NATO or the EU to combat the Kremlin’s secret political warfare against the West, which I’ve profiled in this column. Unlike their sheepish allies—and totally unlike the Obama administration—Poland has bluntly confronted Russian covert influence in their country and has taken visible action to minimize it.

Just this week, Polish authorities raided the headquarters of the Zmiana (Change) party and arrested its leader, Mateusz Piskorski, as a Russian agent. Piskorski, a right-wing nationalist with views veering toward neo-Nazism, is a regular commentator in Russian media outlets, noted for his vehement anti-Americanism—a strange position in Poland, where all but the fringes in politics are reflexively pro-American.

Poland today is a faithful American ally and a staunch defender of the West against Russian aggression, no matter who is ruling in Warsaw. Bill Clinton should look at himself and our own system before hurling nasty, unfounded accusations at America’s friends. Our relationship with Poland will not suffer for long from the mess he has needlessly caused, but the same may not be said for his wife’s presidential campaign. 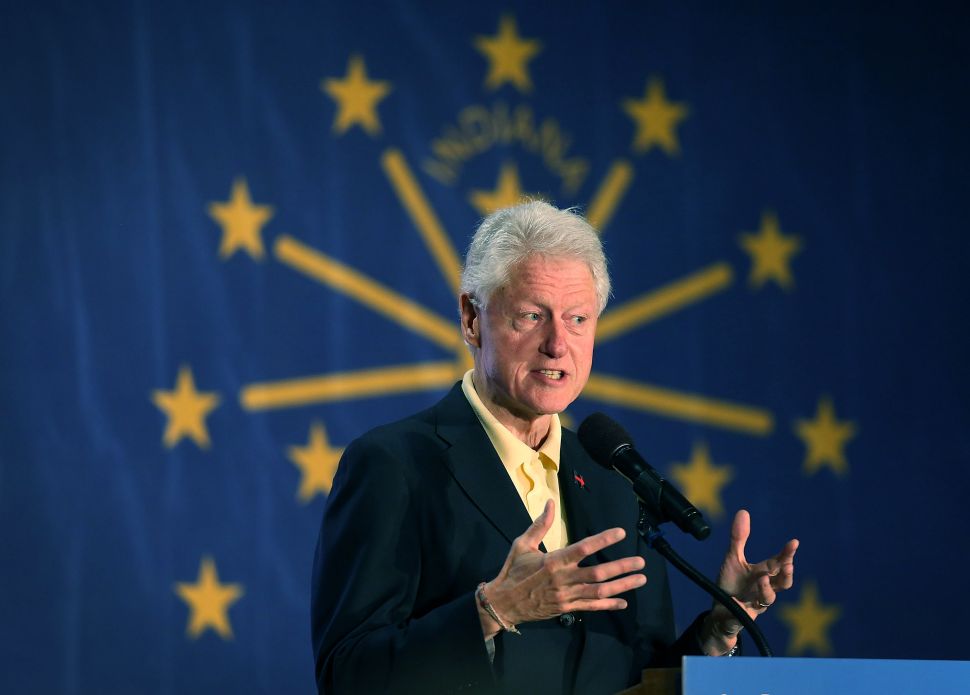