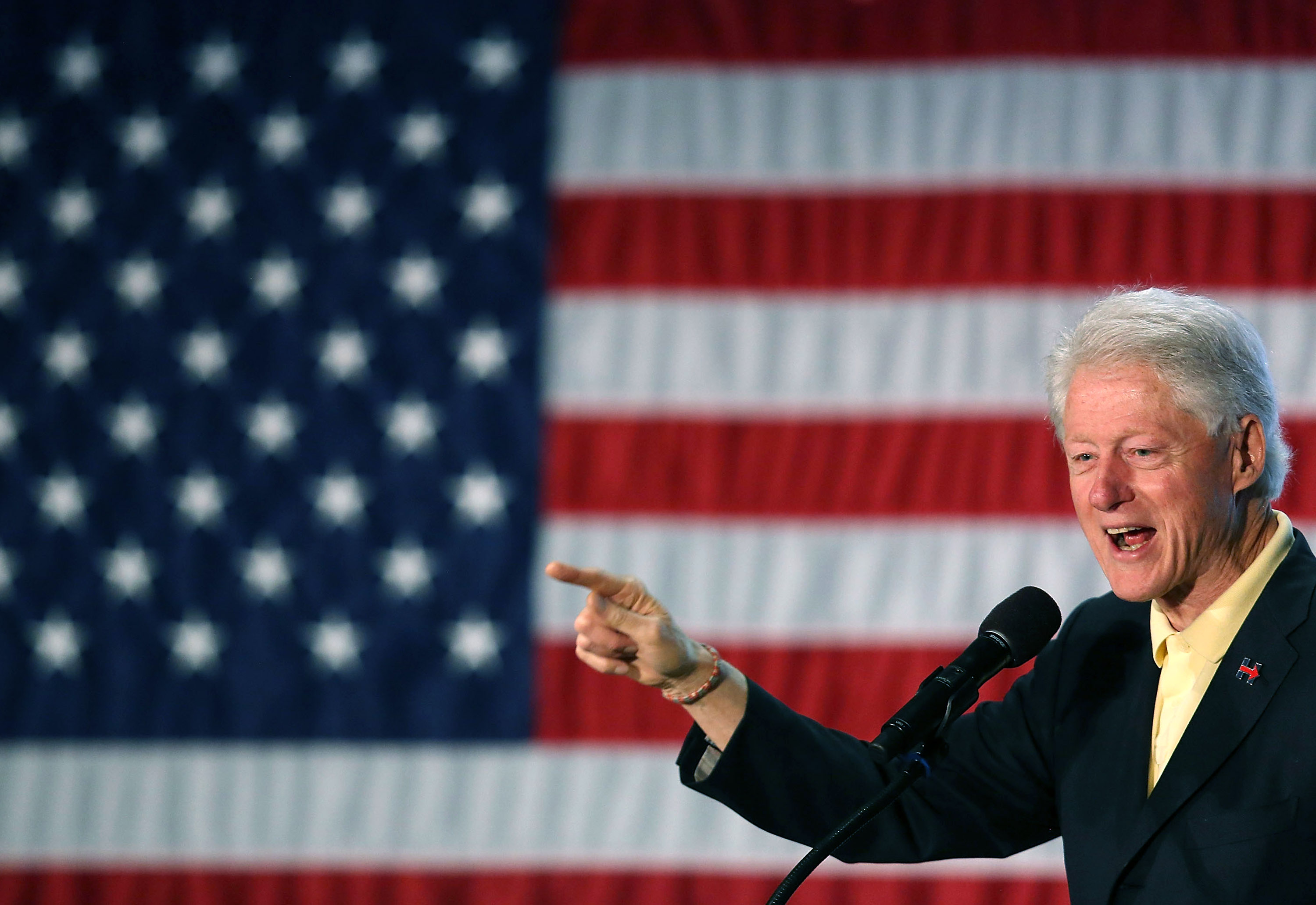 To understand why Bill Clinton is Hillary Clinton’s secret weapon in the presidential campaign, and why Donald Trump is making a catastrophic blunder launching a personal attack against him, lets begin with The New York Times/CBS poll released in the Friday New York Times.

It is equally interesting to note that in the New York Times/CBS poll Mr. Clinton is viewed even more favorably than Bernie Sanders, who scores a respectable 41 percent favorable and 33 percent unfavorable.

I will not dignify Mr. Trump’s latest attacks against Mr. Clinton by repeating them, or rebutting them. They deserve no rebuttal. Mr. Trump may impersonate a public relations flack to praise himself with the media, but Mr. Clinton does not have to impersonate a president. He was president! He was the president for two terms over eight full years. He was a highly successful president whose leadership is fondly remembered today by voters, which is why he scores higher than any presidential candidate in favorability polls.

The reason Mr. Clinton is the Babe Ruth of American politics—with popularity that towers light years above Mr. Trump—is Americans know him very well and view him very favorably. When the widely-disliked bully launches personal attacks against the widely-respected Bambino, the Bambino will win the bout by a knockout.

Ms. Clinton recently announced that Mr. Clinton will be given a prime role in her administration, if she is elected, of lifting the American economy. This is an excellent move. I would only add that she might make it clear that one of Mr. Clinton’s major contributions in a Hillary Clinton administration would be to promote income equality by working to create high paying jobs in a faster-growing economy.

Both Clintons can and should elevate our national discourse to an intelligent discussion about how to make economic life better for Americans.

While Mr. Clinton was working to create these large numbers of jobs Ms. Clinton was by his side as a close and trusted confidant and advisor, in the same way Mr. Clinton will be by her side, working to strengthen the American economy and create high wage jobs if she is elected.

Give the state of the Democratic race for the nomination today, two things are clear to this columnist.

First, Mr. Sanders should completely end his criticism of Ms. Clinton and, as Senator Elizabeth Warren is doing brilliantly, focus his criticism on Mr. Trump. It is a positive if Mr. Sanders stays in the race through the California primary and promotes his progressive agenda, which I generally agree with. But with the probability of his being nominated by the party as no more than 1 percent it would be a huge mistake if his campaign becomes a divisive force that plays to the advantage of Mr. Trump. There is today a growing sense of liberal unease, which I share, about this possibility. Mr. Sanders can play a profoundly historic role on behalf of progressive causes and helping to elect liberal Democrats in November but he needs to avoid becoming a negative and divisive force within the party that would alienate even many long time progressives.

Second, Ms. Clinton should dramatically increase her efforts to offer a positive and uplifting vision for the nation and a more clear and compelling agenda for progressives and political independents, young voters and working class voters who are drawn to Mr. Sanders. It is no secret that Ms. Clinton has high negative ratings which loud political stump speeches and negative television ads from pro-Clinton Super PACs that only attack Mr. Trump do nothing to improve and could reinforce.

The stellar presidential performance of Mr. Clinton, and the high popularity ratings he continues to enjoy, offer a powerful asset to the Clinton campaign. Americans are far more interested in how to create the next 23 million high paying American jobs, lift the economy to stronger economic growth and combat income inequality than listening to politicians they distrust attack each other over issues that do not improve their lives.

Both Clintons can and should elevate our national discourse to an intelligent discussion about how to make economic life better for Americans. They can develop a conversation with the voters that respects their intelligence, addresses their economic interests and concerns, explains why the Bill Clinton presidency was so successful in creating high paying jobs and growing the economy, offers ideas to promote income equality and provides an understandable road map for how a Hillary Clinton presidency can lift the economic lives of all Americans.

One excellent place to start would be for Mr. Clinton to focus heavily on enacting a historic proposal to rebuild the American economy by modernizing America’s roads, bridges, ports, schools and airports.

The rebuild America proposals have been circulating without dramatic action for a decade.

They are supported by organized labor and by leading business groups such as the Chamber of Commerce, National Association of Manufacturers and the Business Roundtable.

The reason this widely supported program has not yet been enacted, despite support from business and labor, is the dysfunctional politics in Washington that voters deplore.

Ms. Clinton should make the rebuilding of America and the creation of high paying American jobs and greater economic equality that would result one of the centerpieces of her campaign, discussed every day, promoted through every means, explained to voters in town hall meetings and interviews, and advanced in campaign television ads that are far more persuasive than endless rounds of political attacks and name-calling.

Ms. Clinton should vow that a mega-proposal to rebuild America will be enacted in the first 100 days of her presidency, and Mr. Clinton could explore the possibility of trying to enact this plan now, even before the election. With Americans yearning for high paying jobs it is ridiculous that a plan with so much support from labor and business, and so much support from Democrats and Republicans in Congress, cannot be enacted promptly to get the economy moving again to greater achievements than the meager economic growth that is becoming a way of life.

President Obama supports the plan to rebuild America. So do many Democratic and Republican leaders in Congress. Why can’t Mr. Clinton meet with the president to plan a strategy to enact it, then meet with Democratic leaders in the House and Senate, and then offer Republican leaders in Congress the opportunity to share credit for enacting this Clinton-generated initiative this year, to help American workers right now?

Republicans would say no at their peril.

Bill Clinton is the Babe Ruth of American politics. He is more popular than any national candidate in either party. He has been a successful president who unlike Mr. Trump is respected around the world and widely admired by the American people. He is a man of action and ideas who knows how to get things done and has proven this during eight years in the presidency, which is why he remains so popular today. 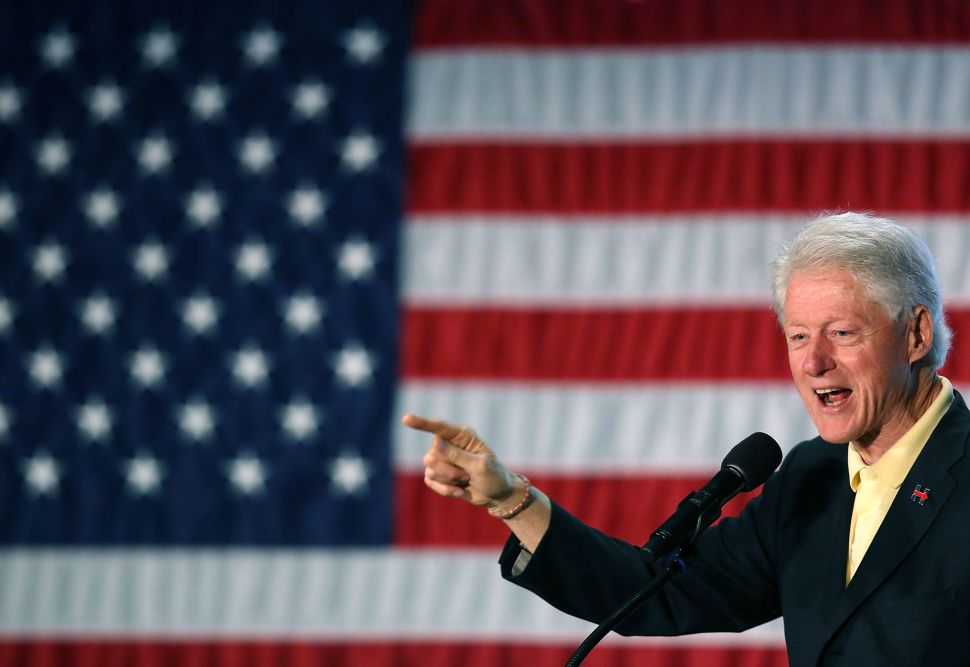