BLOOMFIELD – As Bloomfield continues to grapple with the ramifications of a Seton Hall Law report claiming that racial profiling is a factor in why police officers issue tickets in the municipality, Mayor Michael Venezia held a public discussion to address the issue.

At the discussion, Venezia and his fellow panelists discussed what they felt the flaws were with the study and what the next steps would be to ensure that no such racial profiling occurs in Bloomfield.

“We are disappointed in the Seton Hall study for a few reasons,” said Venezia during his opening remarks. He claimed that the study’s methodology was incomplete and cited a lack of collaboration between the authors and the township as an issue. “Given the painful history of racial-charged issues… we have been looking into best practices and potential reforms.”

Venezia’s discussion comes two weeks after a similar forum was held by Councilman Joseph Lopez, the mayor’s competition in the coming June 7 mayoral primary. This time, Lopez sat in the audience among the crowd.

Study author Mark Denbeaux was originally slated to attend but sent a letter to Venezia—and also addressed that letter to Lopez—on Monday announcing that he would not be present at the panel. According to that letter, Denbeaux withdrew from Venezia’s meeting because his attendance was contingent upon the receipt of data from the Bloomfield Police Department. Denbeaux claimed the data was withheld but, according to a Monday press release by Venezia, the information sought by Denbeaux was “overly broad and not applicable to the township’s police data systems.”

Denbeaux attended the meeting held by Lopez in April. On Monday, Lopez issued a press release blasting Venezia and Bloomfield administrators for not releasing the data that Denbeaux had asked for. A Venezia spokesman said that the statement by Lopez was needlessly politicizing the sensitive issue.

“The fact that this was issued in the middle of a campaign… it probably could have waited a few weeks,” Assemblyman Caputo said during the Tuesday discussion. “Instead of having two meetings we could have had one meeting. What this did was needlessly polarize an issue that didn’t need polarizing.”

Senator Rice also spoke out about how the issue must not be made into politics if it is to be resolved. According to Rice, while racial profiling is a known issue in the U.S., a new independent study needs to be conducted in Bloomfield so that any political concerns can be avoided.

“We are not going to take this issue and politicize it,” said Rice. “The question is not the politics of it but what we do as a community… to eliminate it. To make sure it does not occur. I know that we have these problems throughout the state and we have a lot of these issues around the country. I am here to listen.”

During the forum, Police Director DeMaio explained why the results of the study showed police concentrated in certain areas. He said that 75 to 80 percent of crimes are concentrated in certain parts of the city so, therefore, those areas receive 75 to 80 percent of police resources. He said that concentrating police evenly throughout the town despite crime concentration would be “irresponsible policing.” He also showed Bloomfield Police Department data cataloguing the race of those involved in Bloomfield traffic stops. That data demonstrates that traffic stops are consistent across the board among racial groups.

DeMaio also blasted the Seton Hall authors for releasing the data “without the proper information and the proper data” and without talking to police officers.

During the question and answer segment of the event, Lopez took to the microphone to speak about the allegations that the issue had been politicized. He claimed that such calls were false. He said that the purpose of his meeting was to address the feelings of individuals who claim racial profiling in an open way.

There has also been some speculation as to whether or not Bloomfield was actually chosen at random and questioning of ulterior motivation.

According to Dr. Margaryan, the main issue with the study was a flawed methodology that did not undergo peer review. She said that, because of the flaws, the conclusions made by the authors were unsupported observations rather than studied and provable outcomes. 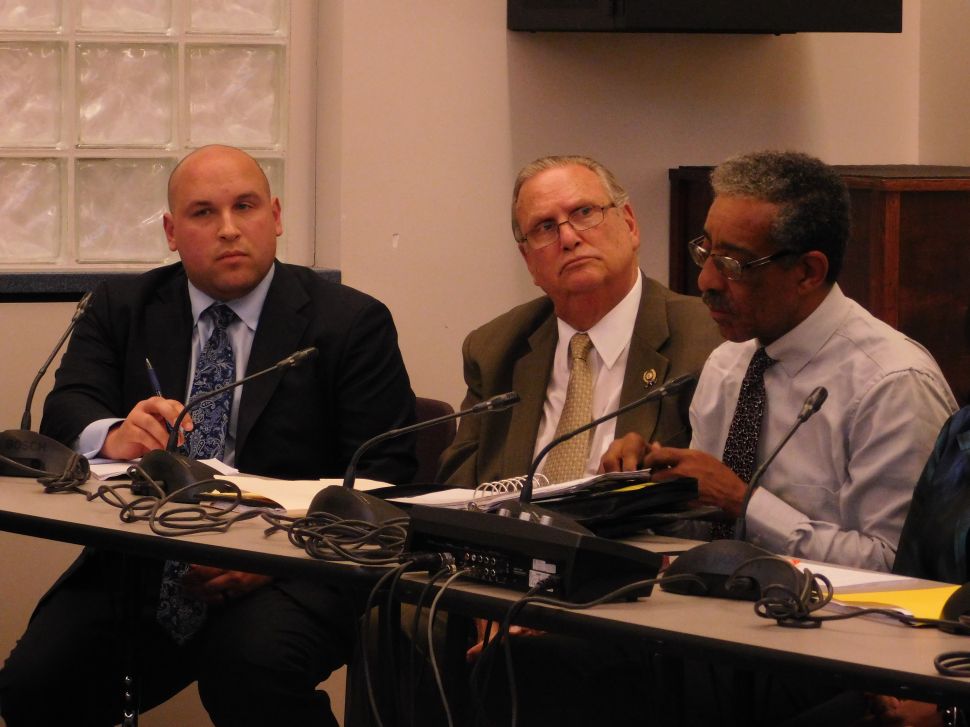