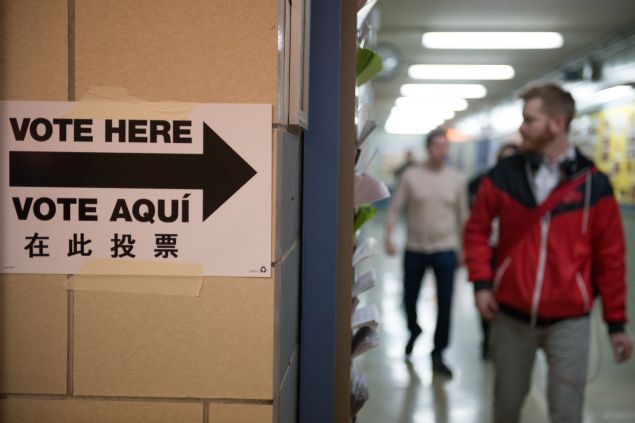 Testimony at a Voter Assistance Advisory Committee hearing Tuesday showcased widespread public frustration with the city Board of Elections following its controversial handling of the April 19 New York primary.

The range of concerns brought up included the much-reported purging of voting rolls and the questionable treatment of affidavit ballots, but several attendees also criticized what they see as the larger inaccessibility of the voting process.

Beth Grundfest-Frigeri, a disability rights advocate and resident of a homeless shelter in Rockaway, Queens, found herself missing from the state voter database despite updating her voter registration before New York’s October 9 deadline to change party affiliation. She says her husband updated his voter registration on the same day to reflect their change in residence, yet he remained on the rolls, the only difference being that he kept his party affiliation the same while she did not.

“There shouldn’t be any discrepancy,” she said, later adding that she felt what happened was deliberate. “[I think] that someone decided to target mainly people like myself, who switched from the Republican party to the Democratic party, and to delete them,” Ms. Grundfest-Frigeri told the Observer.

But a larger concern of hers was the number of hoops she was required to jump through during the process. Even if a person is organized and meets deadlines, she explained, they still run into problems. She said this makes voting for individuals in situations similar to hers near impossible.

“It’s hard enough surviving the New York shelter system as two people with disabilities,” she told VAAC, which advises the New York City Campaign Finance Board, in her testimony.

Hunter College student Jessie Rodriguez co-organized a voter registration drive at her school a month before the primary, registering about 1,200 students.

“Most of the students were first-time voters, and they were very excited to participate in the political process and have their voices heard,” she said in her testimony yesterday. “But on primary day, I had about 50 students coming to me to tell me that they couldn’t vote because either their registration wasn’t in the books, or they showed up as non-party affiliated or Green party affiliated, or they were given the wrong polling locations.”

While these incidents were perhaps more jarring, she said, beyond those 50 students were dozens of others who were also unable to vote because they did not change their party registration in time for New York’s October 9 deadline.

She argued these voters can’t be ignored, saying, “I don’t even know what I’m going to have for dinner tonight, better yet what’s happening six months from now.”

According to Ari Berman of The Nation, 27 percent of New Yorkers eligible to vote were unable to do so on April 19 because of the closed primaries, and New York ended up with the second lowest voter turnout, after Louisiana, of all the primaries that had occurred up until then.

Criticisms of the Board of Elections throughout the meeting yesterday straddled between charges of gross incompetence and charges of a larger, calculated effort to disenfranchise voters—with some going so far as to argue the situation on April 19 merits a recount. But attendees also slammed the BOE on its handling of their concerns in the weeks following the primary.

“They have had such a dismissive and condescending posture towards legitimate grievances,” Brian Douglas, a member of the organization New York Election Justice, said of the hearings the BOE has held in the past month.

Fellow attendee Andy Okuneff agreed with this sentiment, saying the attitude of the BOE has made him somewhat more inclined to believe that wrongdoing took place. “The sort of abrasive response of the BOE has decreased their credibility,” he said.

The Board of Elections did not return requests for comment before press time, but on this subject, VAAC member John Avlon said after the hearing, “Very often, incompetence, carelessness, callousness, are a better explanation for voters’ individual frustrations—which are real—than conspiracy to affect an election outcome.”

He continued that while the level of follow-through from the public this election cycle is somewhat unusual, the systemic nature of the issues brought up highlight the urgent need for election reform.

“It’s so important to take the frustrations that folks may feel and apply them in a way that goes beyond partisanship,” Mr. Avlon told the Observer. “It may not scratch that short-term partisan itch but it is essential to addressing the underlying problem.”

Indeed, the testimony of many attendees pointed to problems far from unique to this election. Prospect Lefferts Gardens resident Sue Yellin, who was a poll worker on primary day, raised concerns about language accessibility, as several of the voters she encountered only spoke Haitian Creole, which is not one of the languages in which materials are currently offered.

Manhattan resident Michael Miller questioned why voting takes place on a single weekday, rather than a day more convenient for larger portions of the population. Several members of the committee noted that certain voting reforms could ease these burdens—namely, bills introduced in the state assembly that would enact an early voting period.

“We think people are disinterested [but] people can’t vote because they can’t leave their third job,” said Mr. Miller. “If every voter can’t have easy access to the polls, then this is not a democracy.”