Ever wanted to hear a U.S. president complain that his pants were “too tight in the bunghole?”

For this and many other reasons, you should go on HBO Go (or borrow your friend’s password) and watch All the Way as soon as possible. Adapted by Robert Schenkkan from his own Tony-winning play, and featuring a titanic lead performance from Bryan Cranston, the film makes history that could easily be dry and boring come alive and even illuminate the present moment.

The film covers one crucial year, 1964, in the life of President Lyndon Baines Johnson (played by Mr. Cranston). An “accidental president’ sworn in in the wake of John F. Kennedy’s assassination, he scrambles to get Kennedy’s Civil Rights Act through Congress while also preparing for a general election fight of his own.

As All The Way makes clear, Johnson’s backroom dealing to get votes for civil rights marked the beginning of the modern era of political gamesmanship. His political mentor (Frank Langella) drones on about “principles and party unity,” but that doesn’t stop LBJ from dispatching an aide to visit a senator with a malignant brain tumor in the hospital because “if he’s conscious, he can vote!”

Director Jay Roach, who’s helmed some of the best HBO movies of recent years like Recount and Game Change, uses the same sure hand here—whether filming a monologue in tight close-up or a crowded convention scene, he makes sure the audience’s focus is right where it needs to be.

In adapting his own work, Mr. Schenkkan has sacrificed some of the smaller moments that gave his play added power. To compensate, however, he has added new material to reflect that he now has all of Washington, D.C. to play with instead of one small stage—a tender moment between LBJ and one of his daughters in a White House hallway is one example of this.

Mr. Cranston may be best known as Walter White, but this is the role he was truly born to play—it’s some of the best acting you’ll see on stage or screen this year.

The film’s ensemble cast is a who’s who of acting talent. Melissa Leo’s Lady Bird Johnson gives her husband a tender shoulder to lean on. Anthony Mackie (who should be in more movies like this and less Marvel product) powerfully expresses Martin Luther King Jr’s divided loyalties, as he is torn between the nonviolent resistance he preaches and the violent reality he faces on the streets. As Hubert Humphrey, LBJ’s protege and vice presidential candidate, Bradley Whitford cannily inhabits a West Wing of yesteryear. Stephen Root’s J. Edgar Hoover sometimes threatens to become cartoonish,but he still brings across the FBI director’s terror at the thought that his surveillance work goes unappreciated in the Oval Office.

But of course, the main attraction is Mr. Cranston, who won a Tony Award for playing LBJ on Broadway and is virtually guaranteed to win an Emmy for his electrifying work here. He truly becomes LBJ, whether tossing off “bunghole” jokes, making powerful civil rights speeches to Congress or engaging in painful inner monologues about whether his election fight is worth it (a climactic soliloquy is particularly powerful). Mr. Cranston may be best known as Walter White, but this is the role he was truly born to play—it’s some of the best acting you’ll see on stage or screen this year.

When this writer saw All the Way on Broadway two years ago, he expected a dry history lesson. What he got instead was an absorbing, revealing look at presidential politics. The movie may have a larger scope, but it retains the power of the original play. (And here’s hoping that The Great Society, Mr. Schenkkan’s play about LBJ’s second term in office, makes its way to the big screen or the Broadway stage some time soon).

All The Way will be repeated on HBO ad nauseum in the coming weeks, and is also available on HBO Go. 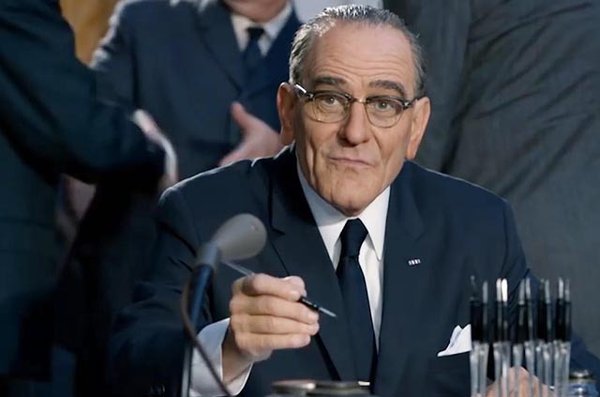