If you have $90 and an internet connection, MasterClass will provide you an amazing opportunity: singing lessons from six-time Grammy-winner and best-selling artist Christina Aguilera.

In the era of YouTube tutorials and TEDtalks, it makes sense that a service like MasterClass would exist—to capitalize on the eagerness to use to the internet to self-educate. The site offers a variety of courses, all from heavy-hitters—James Patterson (on writing, which Joyce Maynard covered for the Observer last August), Usher (on performing) and Kevin Spacey (on acting)—all presented with a wink and a whispered promise that, perhaps, if you watch 20 or so videos on your laptop and download a 47-page workbook PDF, you too will uncover the secret to celebrity success.

Ms. Aguilera seems a natural addition to the MasterClass roster. It’s been four years since her last album, and in the meantime, she’s devoted her energies toward mentoring, appearing as a coach on six of the 10 seasons of NBC’s The Voice. Although none of her contestants have won the contest yet, this year’s Alisan Porter is ranking as one of the favorites. “My main purpose in life is just to inspire,” Ms. Aguilera told the Observer in a phone interview as she was getting ready to shoot for The Voice.

Of course, not everyone has the natural talent that defined Ms. Aguilera’s 20-year career. “It helps to have the goods,” Ms. Aguilera said. But, she continued, being a good singer is just as much about attitude.

I was lucky enough to be able to enroll in Ms. Aguilera’s singing MasterClass, and I did so with the hope that it would bring me from middling alto college a cappella singer to someone who would be able to growl about the Moulin Rouge with P!nk on a Baz Luhrmann soundtrack.

For example, in her lesson called “Protecting Your Voice,” you’ll learn European venues are often smoky. Instead of sticking around after your show, it’s better to protect your voice by hanging out in your hotel room where you can relax

While Ms. Aguilera doesn’t teach you any specific warm-up routines, she does teach you something more important: pre-show essentials. For instance, have a spread of hot tea, hot coffee, room-temperature , honey (open and on a plate) and unwrapped Ricola cough drops ready to go before you perform. It goes without saying that after your set, the should be ice cold. And if you’re worried about tiring out your voice, Ms. Aguilera offers salient advice on that front as well: Don’t talk too much to your hair and makeup artist while they get you ready for your set (even if you are as close with them as Ms. Aguilera is with her team). So, to recap: don’t be afraid to be a diva when it comes to your rider, don’t talk to the help and don’t go all out during your sound check. These are the elements Ms. Aguilera emphasizes in her vocal lessons that you’ll need to remember if you’re going to give a great performance when it’s actually showtime.

The thing to take away here about Ms. Aguilera’s MasterClass is it’s not just for singers who are already great. Her insights are valuable for singers at any level. For example, in her lesson called “Protecting Your Voice,” you’ll learn European venues are often smoky. Instead of sticking around after your show, it’s better to protect your voice by hanging out in your hotel room where you can relax. Las Vegas, she notes, can be especially drying on the voice, first because it’s a desert but also because the rooms are heavily air-conditioned. Ms. Aguilera recommends taking extra care to keep your voice moist with plenty of the aforementioned room-temperature and pre-opened lozenges. That’s the type of essential warning beginner singers on their global tours should know.

The most exciting moment of the course is the lesson on expanding your range. It’s here where having Christina Aguilera—famous for her dazzling vocal runs—as your private (albeit digital) singing instructor is an invaluable learning tool. You’ll have to forgive me here for quoting her advice verbatim: “If there are certain notes you can’t hit, maybe you do want to see if a vocal teacher can help you with that.” 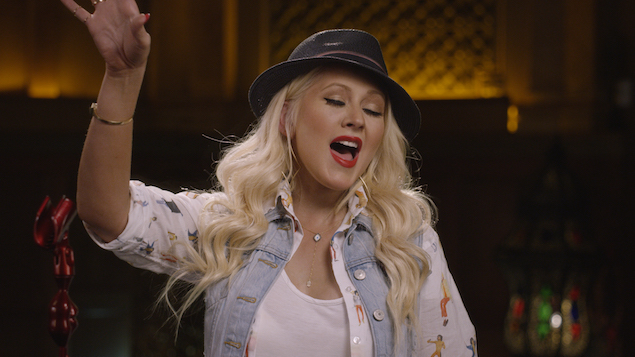