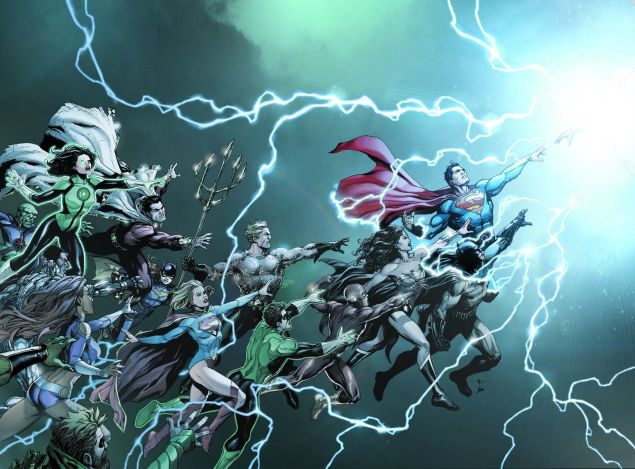 “Nothing ends, Adrian. Nothing ever ends.”

As long as there have been comic boots, there has been reboots. As long as comic books have built their own contained universes, those universes have shifted, been destroyed, been reborn, and duplicated. Heroes die and come back to life. Dimensions crash into each other, combining or splitting in half. Characters meet their twin, and then the twin of their twin, who may or may not actually be their son.

So when DC Comics announced “DC Universe Rebirth”, the collective groan was loud enough to be heard across the multi-verse. After all, DC just did this, in 2011, when the company’s “New 52” initiative brought all its titles back to #1 with a new history, a new direction, and a new aesthetic. For those unaware, that aesthetic was dark. The New 52 essentially worked to take any of the levity still struggling against the dreariness brought on by the Watchmen and the Dark Knight Returns of the 80s, and snugged it out. Beloved relationships between characters were broken, or erased. DC co-publisher Dan DiDio famously said at the time that DC’s heroes can’t be married, because marriage makes people happy. While Marvel and its accompanying cinematic universe leaned away from the dark, DC leaned in hard, all coming to a head in the heavy, lifeless Batman vs. Superman: Dawn of Justice, in which director Zach Snyder had two of pop-culture’s most iconic symbols of hope bash into each other repeatedly. DC Comics had finally made comics, a medium that quite literally lives in color, synonymous with darkness.

And then there’s DC Universe Rebirth #1, written by Geoff Johns and brought to life by a bevy of artists, each taking a chapter in the over-sized single-issue. It’s the first reboot–and yes, despite what DC tells you, it IS a reboot–that also feels like an explanation. Not so much an apology, but a reflection on things that didn’t work. An acknowledgment. If the entire DC Universe could form into a sentient being, point a super-powered finger at itself and boom “My bad,” it would with this issue. And somehow, by the end, you accept its apology.

The specifics are a bit convoluted, especially for non-DC diehards, utilizing the time-hopping, universe-ripping beats that reboots are made (and unmade) of. The revelations come non-stop, page by page (Superman is MISSING? There are THREE Jokers? Darkseid is a BABY now?), but the through-line is Wally West–not New 52 Wallace West, the original Wally West–trying to escape the extra-dimensional construct called the Speed-Force (stay with me here). 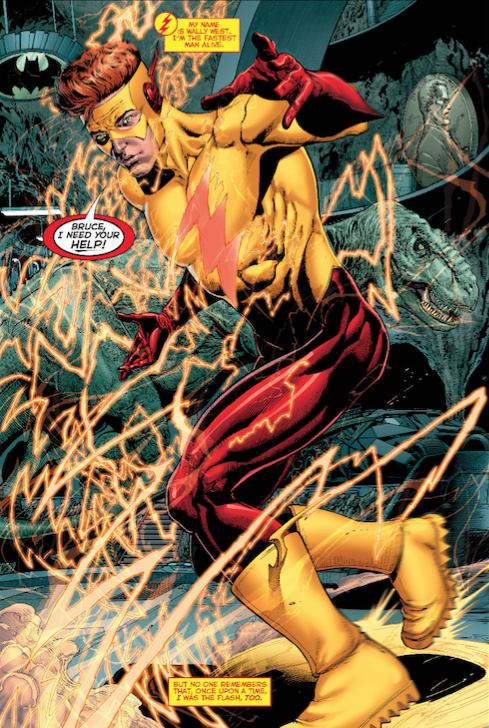 Wally was a victim of the New 52’s slate-wiping, forgotten in favor of something new. Here, the real-life publishing event that was the New 52 is used as an in-comic plot device, a momentous universe-shifting event that Wally West was able to watch from the outside as it changed the world around him. Not only that, he saw that someone was responsible for it all. A man that removed the levity, the joy, the happiness and the love from the DC Universe on purpose, because he was created in a cynical, hopeless world and it’s all he’s ever known.

Nothing ends, Adrian. Nothing ever ends. 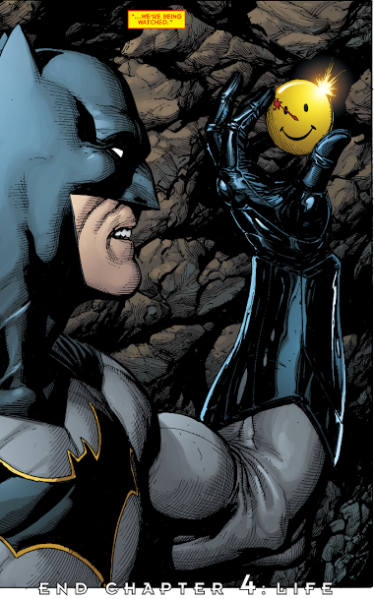 The man behind the curtain pulling the DC Universe strings is none other than Doctor Manhattan, man-turned-god, star of writer Alan Moore and artist Steve Gibbons’ seminal 1987 graphic novel Watchmen. A book that DC has, in the past, kept staunchly separate from the rest of its extended universe. Until now, when Batman finds the iconic bloody-smile of The Comedian, and an epilogue set on Mars echoes a famous line from Doctor Manhattan across a familiar nine-panel grid: “Nothing ends, Adrian. Nothing ever ends.”

It’s a momentous revelation plot-wise, but the more interesting moment is the one DC as a publisher of creative content finds itself in. The character of Doctor Manhattan began as Jonathan Osterman, a normal man who worked, who loved, who dreamed, but was turned into the god-like Manhattan through a freak accident. Given the ability to do anything, and everything. He ends up leaving Earth because this power has so separated him from the rest of humanity, made him forget what it’s like to empathize, to struggle, feel pleasure, feel anything.

In setting Manhattan up as the perpetrator of the New 52, DC has put to page an honest critique of itself. Like Manhattan, the company grew to such heights it lost sight of what it meant to fans that its characters were relatable. That they could marry, and occasionally be happy, or just sometimes feel something other than a desire to brood and punch criminals in the face. “There’s going to be a war and despair,” intones Wally West, now freed from the Speed-Force, in Rebirth’s closing pages. “Love and apathy. Faith and disbelief.”

That’s what makes this fascinating. DC Comics has entered a fight with its own past. With its own creative decisions. DC helped to create the darkness with Watchmen, and now it’s trying to beat it back 26 years later. And Rebirth does try. The color palate throughout is vivid as it is bright. The character that brought about the New 52 in the first place, PAndora, is blasted into nonexistence. Aquaman, that adorable ocean-dwelling bastard, makes Mr. DiDio eat his own words by proposing to Mera on the beach where they first met (and she first tried to kill him. D’aw). 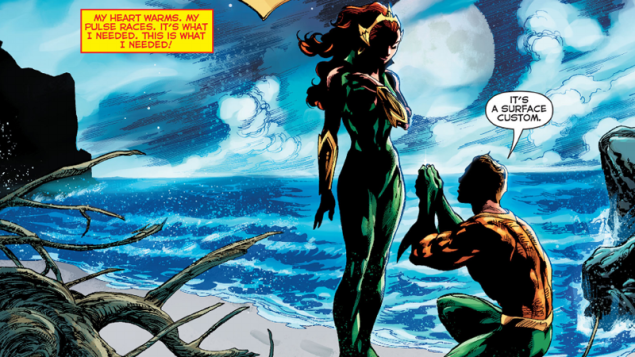 Love is coming back to the DC Universe. So is hope. So is light. But Watchmen is watching from a distant red planet, and in this brighter DC Universe Doctor Manhattan will not be happy. This story has the potential to go on for years, branching out into all of DC’s new series, but in the end only needs to answer one question: If DC is going to war with itself…who wins in the end?

“Nothing ends, Adrian. Nothing ever ends.” 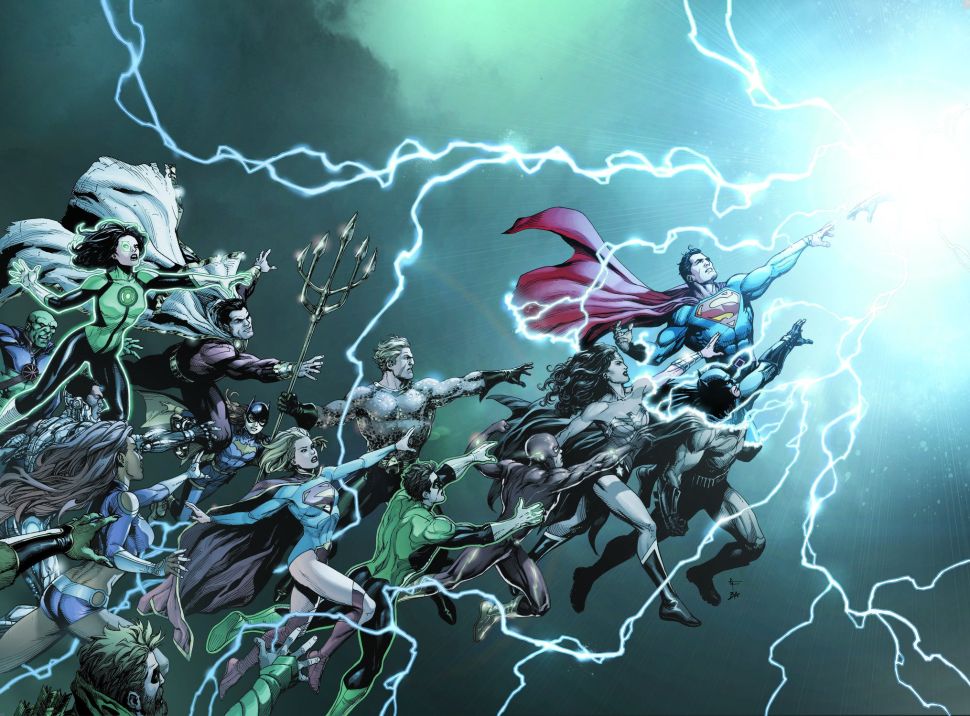