It’s not every day you get mentioned by the leader of the free world, so who cares if it’s because he’s making fun of you?

“It is an honor to be cooked by the leader of the free world,” Mayor Bill de Blasio said today, borrowing the language Hot 97 host Ebro Darden used to describe the roasting the mayor got.

In perhaps the most meta interaction possible, one of the many cracks President Barack Obama made this weekend at the White House Correspondents Dinner was a joke about a joke Mr. de Blasio had made weeks earlier at The Inner Circle Show.

The mayor had taken the stage with Hillary Clinton, the former secretary of state and Democratic frontrunner for president—who teased him for taking his time to endorse her for president. Mr. de Blasio apologized, saying he was running on “CP time.”

In Mr. de Blasio’s joke, the acronym stood for “cautious politician.” But its better known to stand for “colored people time,” a joking term often used among African-Americans to refer to being late.

When he took the stage at the Correspondent’s Dinner, Mr. Obama said he, too, had been a little late to the show: “I was running on CPT, which stands for jokes that white people should not make.”

“It’s funny when the president of the United States makes a joke about you,” the mayor said today on the city’s most well-known rap and hip-hop station. “That’s kind of cool.”

Mr. de Blasio, whose wife and two children are black, has been fairly unrepentant about the joke. Asked about it repeatedly by reporters last month, Mr. de Blasio noted his “long experience with the community” and familiarity with a phrase that’s often used humorously. But he argued his only intention was to put the phrase in the context of a skit and to “subvert” to expectations so the joke landed on himself. (The mayor has a long history of being late to events.)

He reiterated that argument today—”It was a satire, the whole show was a satire”—but also noted that the joke ended up leading to lots of negative attention and headlines.

“I guess I’m sad that that’s all happened,” he said.

The Inner Circle Show is New York’s less star-studded answer to the Correspondent’s Dinner and features reporters—including this one—putting on a two-act musical roasting the mayor and others in city and state politics. When that show is over, the mayor puts on his own act, which his team writes, in response. This year, the show put on by the media members of the Inner Circle was themed after Hamilton, the hit musical.

Mr. de Blasio’s response included several local celebrities—including the Hot 97 hosts he spoke with this morning. Mr. Darden, who appeared in a skit before the one referencing CP time, noted plenty of the show’s jokes were in bad taste.

“My friends in the media had jokes that were in bad taste too,” Mr. de Blasio argued. “That’s the whole nature of the show unfortunately.”

(None of the jokes in the media’s show garnered anywhere close to the attention of Mr. de Blasio’s crack, for better or worse.)

Mr. de Blasio has typically found a welcoming audience with the hosts on Hot 97, where he’s frequently appeared on the morning show to tout his policies and shoot the breeze about news. Much of the rest of his conversation this morning revolved around the several scandals in which Mr. de Blasio is currently embroiled, as it would on any radio appearance—but this time, the hosts repeatedly came to his defense, accusing the city’s tabloids of being on a mission to bring down Mr. de Blasio. (In addition to the tabs, the broadsheets and every other news outlet in the city, Mr. de Blasio’s campaign finance operation has caught the eye of some heavier hitters: the State Board of Elections, Manhattan District Attorney Cy Vance and U.S. Attorney Preet Bharara.)

But Mr. Darden had a bit of advice for Mr. de Blasio: He ought to get up to a podium and tell The New York Post to “shut your bitch-ass up.” 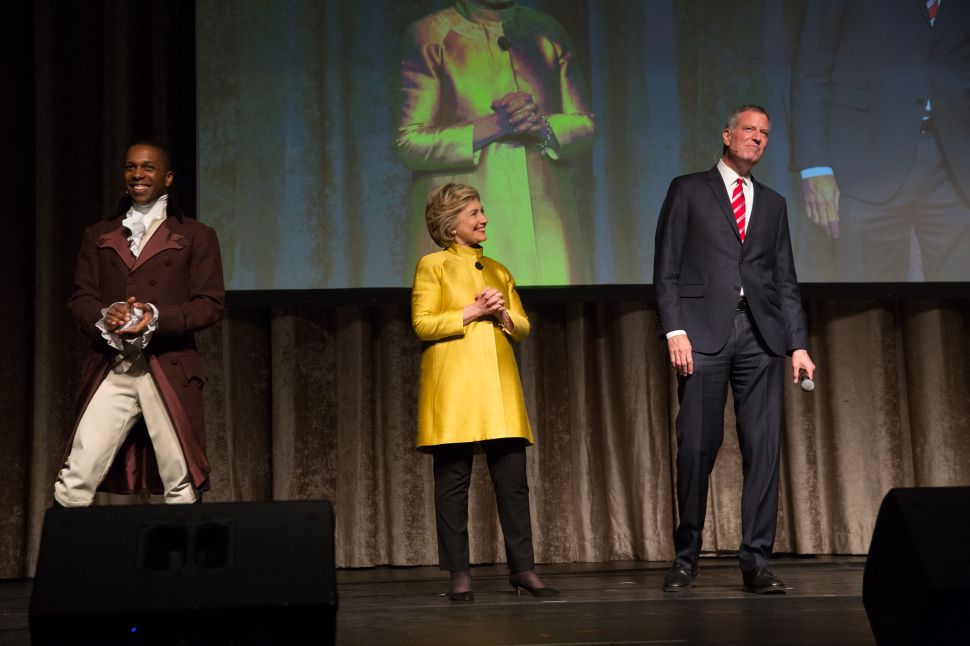